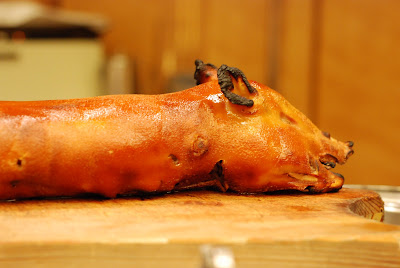 After reading about his fantastic meal at the Kimberly Hotel, I followed Chubby Hubby's lead and headed there for a meal while last in HK. I dragged many of my friends with me to sample this meal, especially after hearing that a large group was neccesary to try all the delicious and large portions. After a lengthy planning period, we had a great group, with two in particular who trekked out to make the initial booking and to make a pre-payment, which is neccesary if you want to have the roast piglet.

As often mentioned, the facade of the hotel is faded and the inside of the restaurant looks even more like something out of Macau, with gilt and tufted chairs everywhere, fake pussy willows and peonies and a complimentary karoke monitor stuck to one wall. One thing that I felt Chubby Hubby's post didn't stress, is how huge (huge, not large) the portions are. In the end, we didn't wind up with as many people as I thought, thanks to last-minute flakers (don't you hate those!) and we drastically shortened the menu but this is how much food we had left over. We felt awful about it and each bag did go home to worthy families. 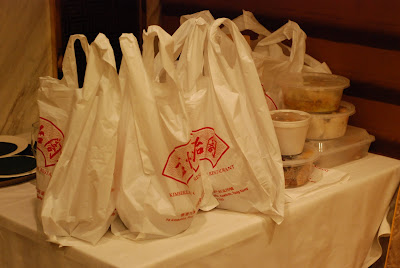 We started with separate dishes that were reminescent of a "cold dish" or "leng pan" that you find at wedding banquets. One was salt and pepper squid, one was a deep-fried salmon skin. I forget what the others were, since even those two excellent, crackly dishes were clearly too generous to be finished. One of the odd dishes that we were served was a large basket of char siew pao. Even though it was very tasty, we all thought it was a bit out of place and filled up our much-needed tummy space.

We then had a lovely double-boiled soup and the salt-baked chicken, followed by a giant crockpot of lemongrass braised beef ribs. All of the dishes were excellent, piping hot, fresh and with clean, distinct flavours. Suffice to say that we were full mid-way through the meal but we kept eating and eating determinedly. 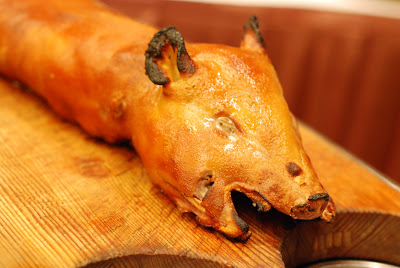 That is, until the roast piglet showed up. It definitely lived up to the hype of being a thing of beauty and the crispiness, the succulent, light mouth-feel of the skin and the sticky glutinous rice, ah, it's too much! It was a truly lovely dish and one that, I think, is probably best executed in an industrial restaurant kitchen. Everyone oohed and aahed over the tray that was wheeled in, posed for photographs and munched their way satisfiedly through their slice. An excellent highlight! 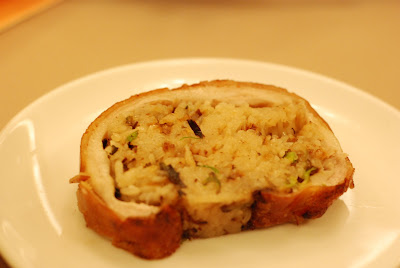 There were a couple of vegetable dishes in between the middle and the finish, which we could hardly manage but the ending was particularly sweet. They brought out bowls of noodle that were really simple and resembled maggi noodles (or the instant mee goreng type noodles) - I don't know if it was the combination of chives, dark soya sauce or onion oil but they were fantastic! Not just delicious but comforting in that unexpected yet spot-on way. 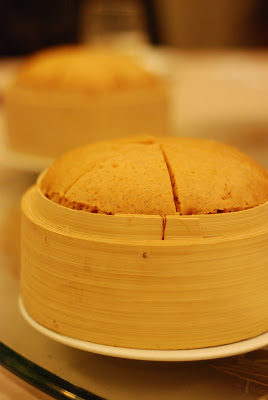 And, just as we thought we were done and way too full for any dessert, they brought out hot-steamed malaikou, wafting it's warm, lightly-caramelized fragrance across the table. The best malaikou I have had, in memory - I would eat it anytime. Overall, it was easily one of the best meals I have had in Hong Kong and I would definitely return with my family. You should try it! 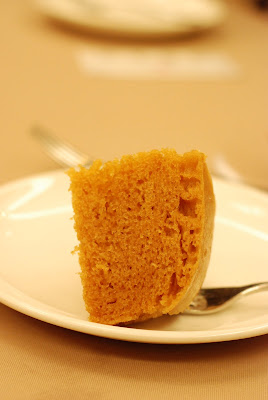