Disclaimer: The meal on which this review is based was made possible and paid for by the good people at FoodNews, a food media consultancy, to whom I should acknowledge my substantial thanks for their unstinting hospitality. 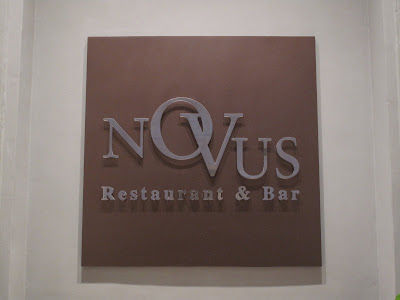 Earlier this year I had lunch at Novus, a modern European restaurant situated in the delightful National Museum of Singapore (which, to my great shame, I must confess to never having properly visited). I had quite enjoyed that lunch, and was looking for an opportunity for a return visit, so it was by happy coincidence that I received an invitation to a tasting of a new summer truffle menu the restaurant was unveiling. 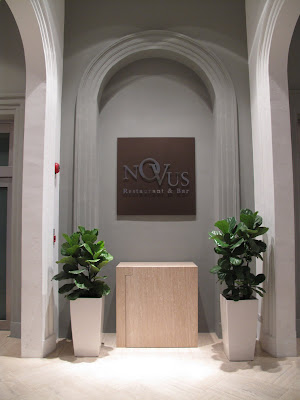 For some reason, I had always thought that Novus was a molecular gastronomy restaurant, and as such it was never really on my radar. After two visits, however, I can safely say that that is a misconception, save for the fact that executive chef Stephan Zoisl, having spent some time in Heston Blumenthal's kitchen in The Fat Duck, has incorporated a few valuable avant-garde techniques in his cooking. 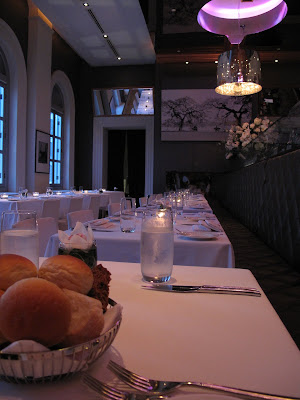 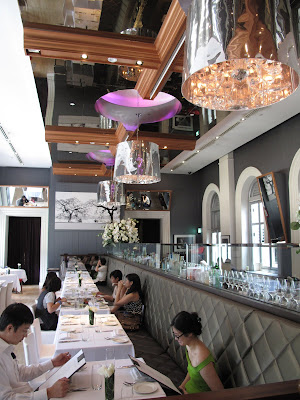 Novus is a very large restaurant, and that is evident from its mouthful of a name: Novus Restaurant, Bar, Cafe & Courtyard. The restaurant itself has a long central bench/couch, with tables on either side of it, and flanked by another row of tables against the tall arch fix windows, which in the daytime let in a generous amount of sunlight. With a seating capacity of 48 in the main restaurant, 60 in the dining room, 60 in the cafe and 50 in the courtyard, Novus is an ideal venue for events and conferences, and is often used as such. The size of the main dining hall also meant that the lighting that evening was a little dim, so some of the photos may not do sufficient justice to the food, but I'll try to make up for it with a more detailed review. 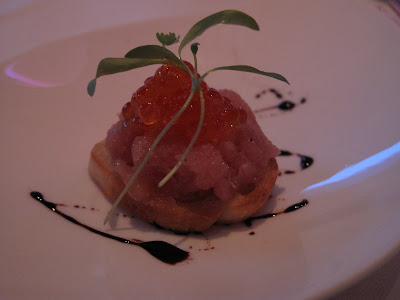 An amuse-bouche of tuna tartare and salmon roe, atop a petite crostini drizzled with aceto balsamico combined both sweet and sour, with just enough saltiness from the roe to awaken the appetite for the meal that was to follow. 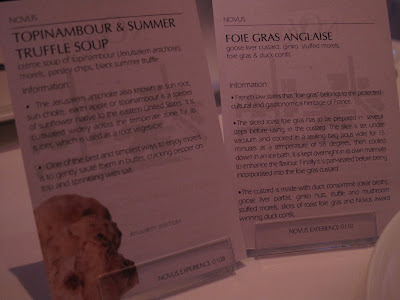 One of the things I really like about Novus is the amount of care that goes into making your dining experience a pleasant and memorable one. Capitalising on the idea of a museum visit, Novus thoughtfully prints little placards containing bite-size tidbits of information about each dish, and waitstaff place them next to you as they serve each course, ensuring that you are never left wondering what has gone into your food, and more importantly, contextualising the key ingredients of your dish, so that, for instance, you appreciate what goes into the making of buffalo mozzarella. Oddly, however, there was no information card on the summer truffle, which I have since discovered is a species of truffle, visually similar to the black truffle, but of a less intense aroma, which was evident throughout the meal, as, despite the generous truffle shavings on many of the dishes, I was surprised to find that the scent of the truffle did not dominate, as I had expected, but languished subtly in the background. 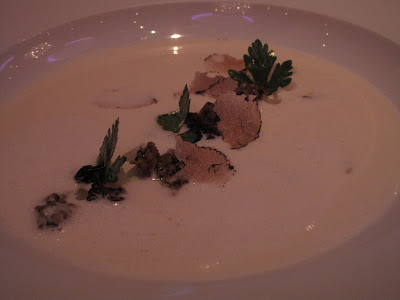 We were served multiple dishes from each course to showcase the summer truffle, beginning with a veloute of Jerusalem artichoke. I quite enjoyed the mellow nuttiness of the soup, which went particularly well with the delicate flavours imparted by the truffle shavings. 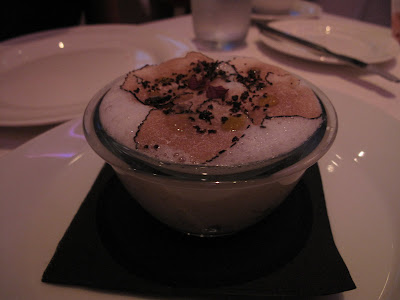 The foie gras anglaise was an unusual method of cooking the goose liver: the main event was a custard made with duck consomme and goose liver parfait, within which was also concealed gingko nuts, stuffed morels, roast foie gras slices, duck confit, all topped with truffle slices. This version of foie gras was not really to my taste, unfortunately, as I found the custard rather runny. On the bright side, however, the fats in the foie gras were able to soak up the perfume of the truffle slices, making each mouthful an almost ephemerally truffle-scented one. 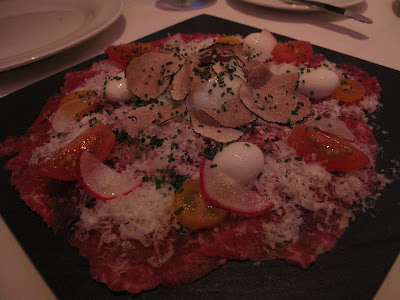 Novus's version of beef carpaccio uses 200-day aged grain-fed Black Angus beef tenderloin, with a quivering poached egg in the middle, surrounded by mozzarella spheres and cherry tomatoes, and sprinkled over with shaved pecorino. The carpaccio came in generous quantities, so much so that the dish nearly resembled a beef tartare in its robustness (and the poached egg), so I was grateful for the luscious mozzarella pearls and the juicy tomatoes, which made the dish less heavy, and more complexly textured. 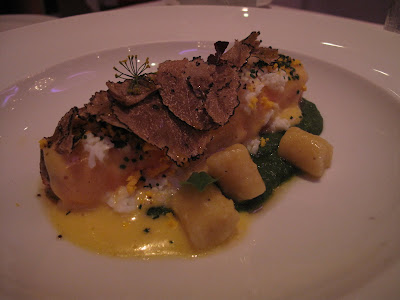 Main courses were up next, beginning with some ocean trout stuffed with summer truffles and konbu seaweed, resting on a bedding of parsley creme and potato sabayon, and adorned with cottage cheese gnocchi. One of the drawbacks, I think, of having a "themed" menu, is trying to figure out how to incorporate the themed ingredient with the main ingredient, and the trout dish was an example of this. I really enjoyed the trout and its accoutrements: the fish was silky and melting, the gnocchi was soft and supple, and the parsley creme was lovely, but I could not quite tell how the truffle added to, or improved on, an otherwise fantastic combination. To me, the truffle shavings seemed like a distraction at best, rather like the proverbial gilding of the lily. 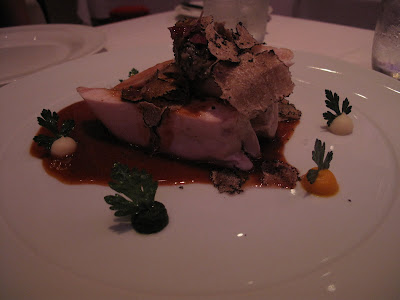 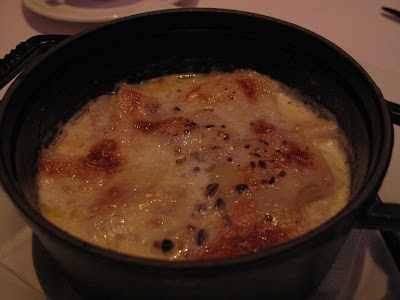 What of the next dish, which was an organic chicken breast stuffed with truffle salsa and cooked en sous vide, served with root vegetables and truffled potato gratin, and sauced with a dark glaze? Here I thought the addition of the truffles made sense, in that the delicate flavour of the chicken benefitted from an extra fillip. As for the chicken itself, this was where the advantages of sous vide cooking presented itself, for the chicken breast was moist, juicy and tremendously tender. I was not, however, much taken with the potato gratin; for some reason, it was swimming rather unabashedly in cream. 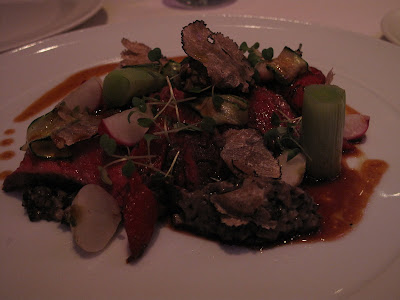 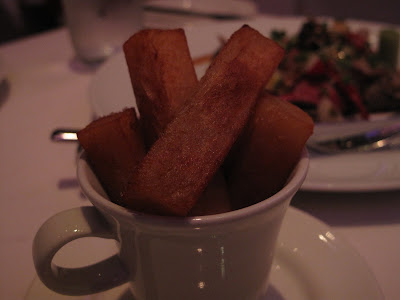 The last of our main courses was an impressive plate of sliced Black Angus beef tenderloin, with wild mushroom duxelles and black summer truffle, a colourful melange of new potatoes, radishes, celery and bell peppers. Accompanying this kingly offering was a side dish of "triple-cooked French fries" - potatoes boiled, chilled, fried, chilled again, and then deep-fried. It is difficult to do justice to this complex dish, which seemed a riot of sensations, textures and colours. The tenderloin was exceptional - uncompromisingly meaty, with just a hint of truffled earthiness - and the French fries were likewise an artful combination of technical sophistication and gastronomic fulfillment. 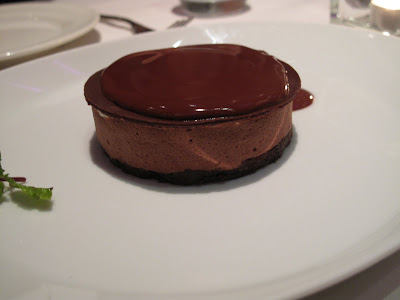 I was having more than a little difficulty taking shots of the desserts, so the restaurant very kindly turned up the lighting (seeing how well the dessert photos turned out, I did think I should have asked for more lighting from the start). Truffles no longer made an appearance at dessert, but were replaced by more conventional ingredients: in this case, a layered creation of white chocolate and raspberries, draped with dark warm chocolate sauce. I was a little sceptical of the white chocolate to begin with, but my doubts were put to rest as I savoured the mild creaminess of the white chocolate and the contrasting tartness of the raspberries. While perhaps one of Novus's simpler dishes, it was nonetheless undoubtedly effective in its powerfully concentrated flavours. 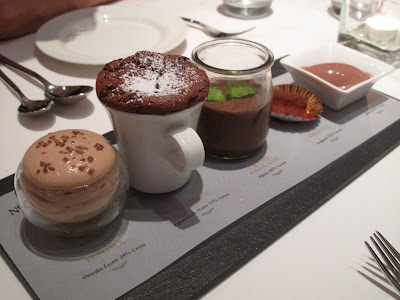 A signature dessert at Novus has to be the Valrhona Chocolate Test, an indulgent series of mini-desserts arranged in ascending order of cocoa content, namely, a 38% aerated chocolate mousse, a 55% chocolate souffle, a 66% chocolate creme anglaise, a 72% chocolate truffle and a 85% chocolate sorbet. Like something out of the mind of Willy Wonka, this is quite simply a chocoholic's fantasy, and it exhibits the kitchen staff's keen familiarity, if not facility, with chocolate-work. An outstanding tribute to a wonderful ingredient, the Chocolate Test was intoxicatingly enjoyable. 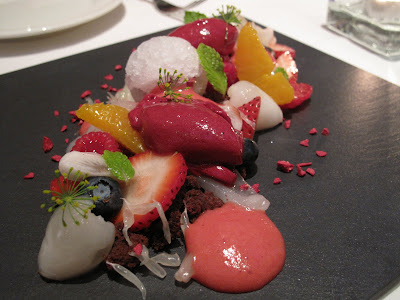 Our final dish for the night was an updated version of a fruit salad: an elegantly abundant assortment of seasonal fruits (blueberries, mangosteens, oranges, raspberries, strawberries), served with chocolate crumble, elderflower granite, wild strawberry espuma and cassis ice cream. Beautifully assembled, and with just the right amount of sugar and citrus, this was the perfect end to a sumptious dinner, cutting through some of the richness of the preceding courses.

Overall, I can't help being impressed by my two visits at Novus. Many of the dishes reviewed above are available for lunch and dinner (some on the regular menu and some only on the seasonal truffle menu), and in them is revealed Chef Zoisl's willingness to push the boundaries of both taste and presentation with his innovative and captivating style of cooking, as well as his ability to stay true to classic, simple flavours and combinations. Set lunch, at $32 for two courses and $40 for three, is prix fixe even with seasonal menus featuring white asparagus and summer truffles, and so is an excellent way of trying some of Novus's more unique offerings without having to break the bank. While prices are higher for dinner, given the generous portions, the inventiveness of the cooking, and the thoughtfulness of the service, I would not say they are unreasonable; rather, if you are looking for something apart from the usual French and Italian fare that eating out always seems to present, or a dinner destination with a charming and evocative ambience (with complimentary parking upon request), Novus might just be Exhibit A.

I must give this place a visit the next time I'm in Singapore. The one dish I really wanted to have is the Valrhona desserts! I'm a big fan of the French Chocolatier.

Hi Colin. Might you be able to share your contact info? We're launching a new dining outlet this week, and we're wondering whether you could be part of it.