I was reading one of the foodie interviews in the papers the other day, and the interviewee commented that there was still a lack of good food from (amongst other regions) Indochina in this country.

To that I would add that there is a severe lack of good Spanish food, although to be fair My Little Spanish Place was not really bad - merely imperfect. 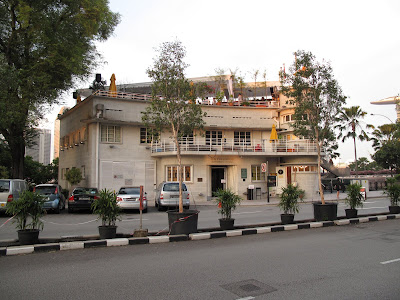 It was with some curiosity and interest, therefore, that I learned that two new Spanish restaurants have opened recently: Sol Tasca at the Fullerton Waterboat House, and Sabio at Duxton Hill. As Sol Tasca was closer, and since Groupon was offering a discount, I made a reservation and sat back to wait. 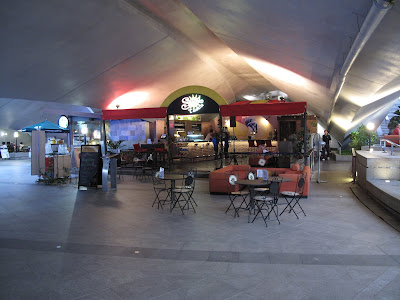 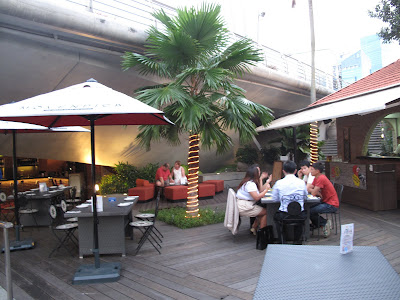 Well, that's not strictly true. I was early, so I decided to examine the restaurant and take more photos while the light was still good. As can be seen, the address of the restaurant at the Fullerton Waterboat House is not entirely accurate: it is not actually in the Waterboat House; rather, it is under it. To be more precise, it is under the bridge, which means that it can be quite warm, as the air is somewhat still, unless you are seated in an exposed area by the bridge, with a fan to improve air circulation. Perhaps to make up for the less than ideal location, Sol Tasca offers what it calls "the longest happy hour in town", and a live band from Wednesdays to Saturdays (who are actually quite good). 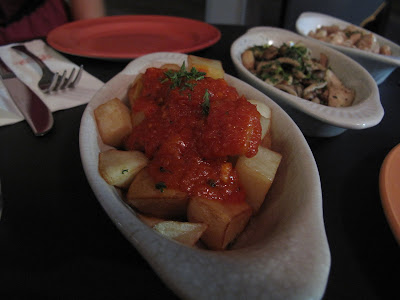 Sadly, however, the food, while tolerable, was not at all memorable. The patatas bravas, for instance, were little cubes of potatoes that looked like they had not been sufficiently fried, and the spicy tomato sauce that covered them looked, at best, poorly prepared, and at worst, manufactured. 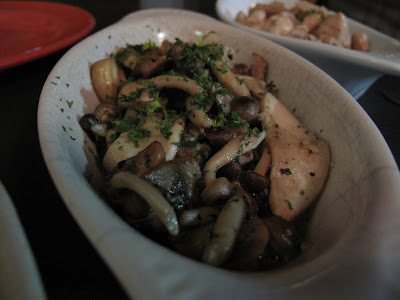 The next tapa (incidentally, there seems to be some disagreement over whether the singular of "tapas" is "tapa" or "tapas") was sauteed mushrooms with balsamic vinaigrette. Now, I love mushrooms, and there was nothing actually wrong with these, but the problem with this tapa, as well as most of the other dishes, was that it simply did not taste Spanish. Unlike the tapas from My Little Spanish Place, there was no hint of that hearty earthiness that characterises Andalucian cuisine, with its liberal use of garlics, peppers, olive oil and sherry. The mushrooms, although certainly palatable, were, to put it bluntly, boring. 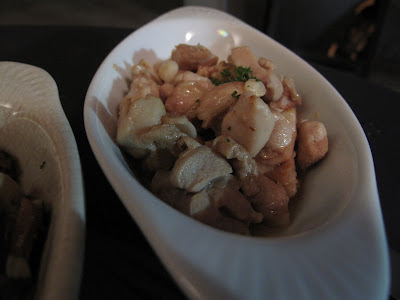 The sauteed chicken with garlic and chilli continued the disappointing trend. Some of the chicken pieces looked like they were not fully cooked, and those that were tasted no different from ordinary cooked chicken. 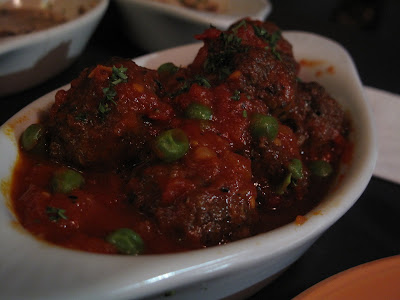 The beef balls in sherry tomato sauce, at least, stood out, for they boasted a robust flavour that was quite unusual, and they were bathed in a rich, full-bodied sauce. Their irregular shapes also advertised that they had been hand-made, which is, of course, only proper. 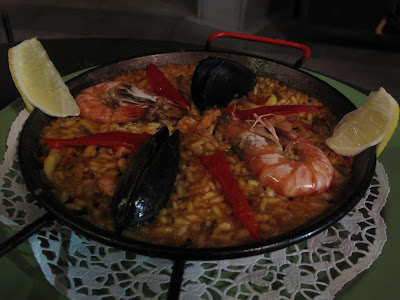 Finally, then, was the main event: seafood paella. As you can see, the lighting by this time was rather poor, but you can just about make out the mussels, peppers and prawns. When the paella first arrived, I thought it was decidedly small, but after some digging, it turned out that the paella dish was much deeper than I had thought. Unfortunately, more was not necessarily better; the paella seemed to me a rather insipid helping of stodgy rice and questionable seafood.

Sol Tasca is a nice place to come after work, where you can chill out to a jug of sangria and the soothing strains of "Oye Como Va", but for good Spanish food, go to Spain.

indeed, i've been trying to satisfy my paella craving, but have so far been disappointed. looks like a trip back to barcelona is inevitable...