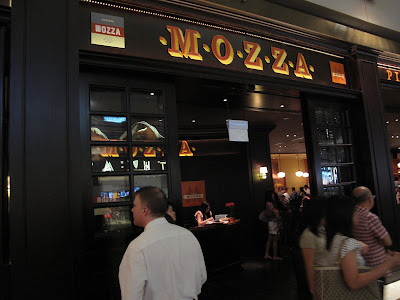 Mozza has a rather irritating policy of having fixed seating times, so our reservation was for 8.15pm (the earlier seating was at 6.15pm), and consequently dinner did not begin till close to 9. That having been said, however, one sees the good sense of such a policy during the weekend - people were still streaming in at 10pm on the Saturday night that we were there.

Much like the original restaurant in Los Angeles, the eatery in Singapore comes as a pair: an upmarket osteria on the left, the centrepiece of which is an amazing "mozzarella bar"; and a casual pizzeria on the right. 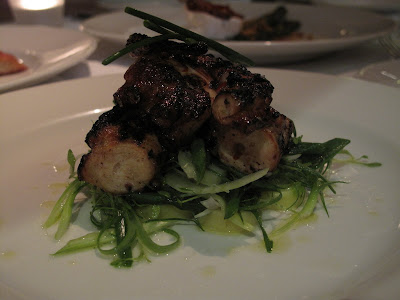 Osteria Mozza has a rather extensive menu, and there were about twelve appetisers to choose from, such as an excellent grilled octopus with potatoes, celery and lemon. While it may have sounded simple, the octopus was truly delicious. I was expecting a baby octopus, and was a little apprehensive at seeing a tentacular segment from what was obviously an adult specimen, but my caution was put to rest when I tried some: the octopus was charred and smokey, and accentuated by the fresh and zesty celery strips and lemon juice. 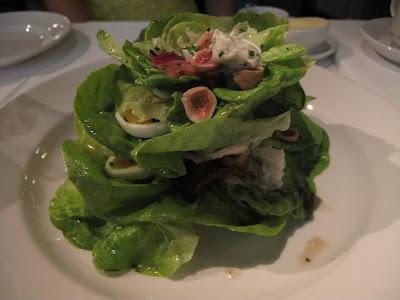 A towering column of butter lettuce leaves with hazelnuts, bacon, gorgonzola and egg was Mozza's version of a garden salad. A beautiful combination of colours, and an amazing array of textures - leafy lettuce, crunchy hazelnuts, creamy gorgonzola and soft, supple eggs - meant that this dish was quickly devoured. 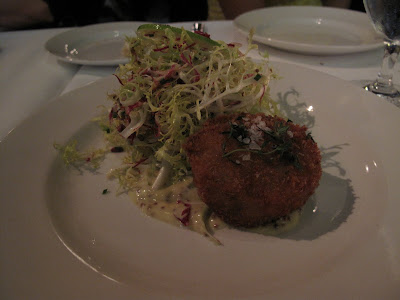 Although resembling a crab cake, this appetiser was in fact a crispy pig trotter with frisee, apple and mustard, and was, as you can see, unfortunately taken under rather poor lighting conditions. 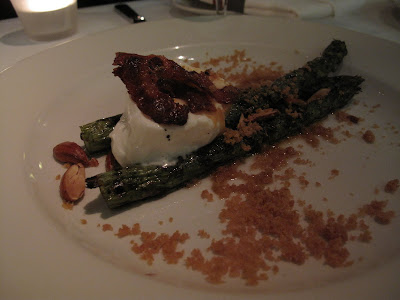 After that, it was on to items from the fabled mozzarella bar, such as burrata with grilled asparagus, brown butter, guanciale (unsmoked bacon made from pig cheek) and salty breadcrumbs. Burrata and asparagus is not the most common of combinations, but if you think about it, not entirely unnatural, for the blend of slight bitterness with rich creaminess works well in a typical asparagus-hollandaise dish, so why not here? 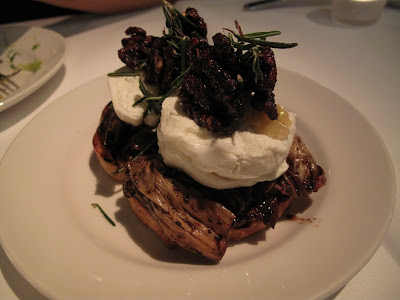 The ricotta with raddichio, spiced walnuts, honey and fried rosemary I didn't enjoy quite so much, but I put this down mainly to the fact that I prefer burrata to ricotta, and because I don't like walnuts or the sharpness of raddichio. 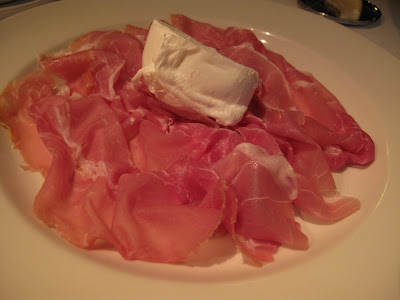 There was nothing to dislike, however, about a platter of buffalo mozzarella with parma ham. A large dollop of soft, luscious mozzarella, on a bed of blushing pink ham, is quite easily my idea of comfort food. Both cheese and ham were some of the freshest I'd ever tasted, and I could probably have eaten a second and third helping in lieu of a main course. 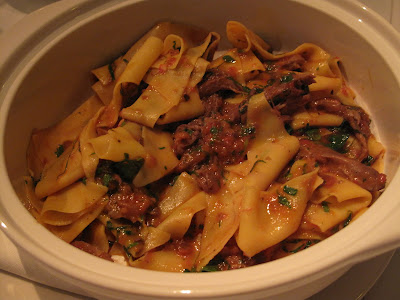 As should be clear by now, I'd gone to Osteria Mozza with quite a big group, which was conducive to sharing. The restaurant, very obligingly, serves its pasta in two sizes - individual and family portions - so we had a family crockpot of maltigliati (flat, ribbony pasta that's like tagliatelle on steroids) with duck ragu, which was rustic and completely satisfying. 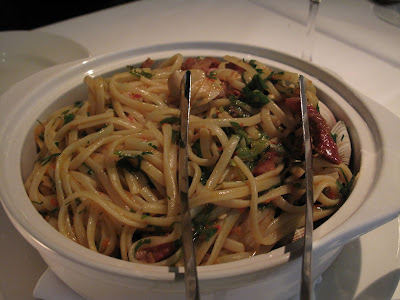 The linguine with clams, pancetta and spicy chillies, however, was rather less impressive, as the addition of the pancetta left an overpowering sensation of saltiness. The chillies, too, were slightly overwhelming, which obscured the delicateness of the clams. 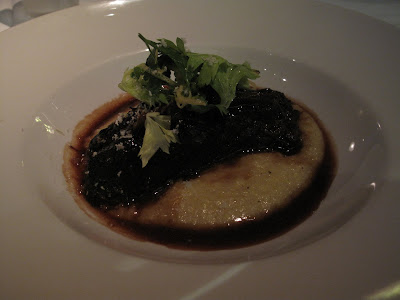 Mains, fortunately, were universally well-received, beginning with the braised short rib with horseradish gremolata. Meltingly tender and unctuous, it was unfortunate that we only ordered one helping, although given that most people were already full by this time, that was probably for the best. 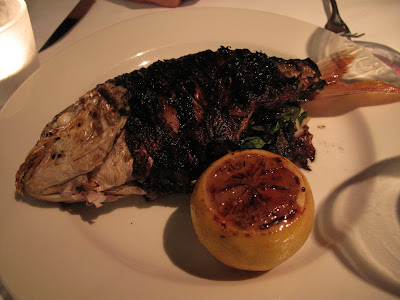 I have often remarked that I am not very partial to fish, but even I had to admit that the grilled whole snapper with herbs and extra virgin olive oil was delectable: the snapper, although a little small, was wonderfully fresh and sweet, and scented through by the herbs that had been stuffed into its belly. The olive oil which the fish had been cooked in, when mixed with lemon juice (from a whole lemon which had been grilled together with the fish), as well as the fish's own cooking juices, created a mellow, citrusy sauce that accentuated the fish's clean taste. 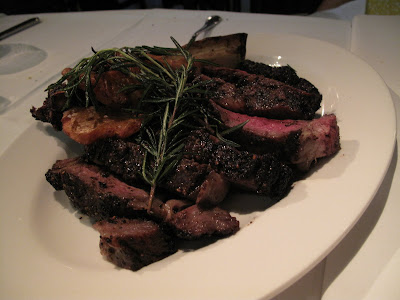 Finally, the meal's piece de resistance was a large porcini rubbed wagyu rib-eye bistecca, which was a thing of beauty. Intensely meaty, but with a perfect, melt in your mouth quality, this was probably why our ancestors became carnivorous.

Osteria Mozza, unlike some of the other celebrity restaurants in town, is not merely a flashy name without any substance, but is a credible contender to being the best Italian restaurant in town. However, as is to be expected with a restaurant with that sort of reputation, the best Italian meal in town is not likely to come cheap. So, save up for a special occasion, and splurge on a deliciously big meal at Osteria Mozza!