My last trip to New York was the first time I had spent much time in Brooklyn and Williamsburg. It is quite a fascinating area but in the past, I had only ever visited specific friends, restaurants and communities there. This was in part because back then, the L train to Brooklyn (even though I lived in Soho and thus was fairly low-down on the Manhattan grid) was very slow and infrequent, not to mention slightly scary at night.

If I were to be completely honest, I still find Brooklyn slightly scary. The whole hipster, granola, knit-your-own-yoghurt vibe is fun to associate with but in truth, I am a city girl at heart. I like the convenience of commercial shops and I like big brands. There, I've said it. I don't like flannel, bespectacled men lounging around at street corners, looking like they don't shower and I hate riding bicycles. So, I'm not really programmed to embrace Brooklyn and Williamsburg but I will admit that it is a lovely part of town with burgeoning communities and some very good food. 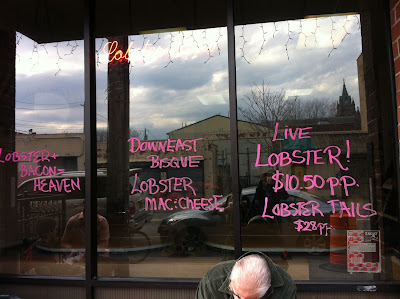 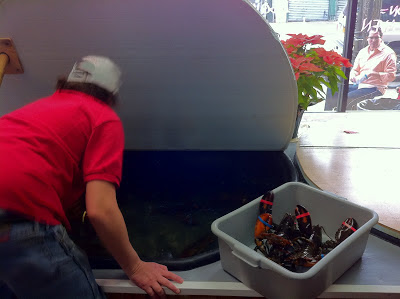 One of the places which I really loved and which unfortunately was worst hit by the storm, is a suburb area called Red Hook. This is where we went to eat lobsters and my, what a good deal it was. The place is called Red Hook Lobster Pound and they sell the freshest, warmest lobster rolls I've possibly ever had (and yes, I've been to Maine). The tubs that you see contain swarms of lobsters and this small store does a steady business of take-away raw and cooked lobster sales. But by far the best thing, is to sit yourself down and buy a hot buttered bun, slathered with cold lobster, mayo and sharp celery. I get goosebumps just thinking of the juicy goodness. If you aren't keen on going so far, you can go to the Pearl Oyster Bar in the Lower East and get a good lobster roll as well but this was really I think half the price and twice the goodness. 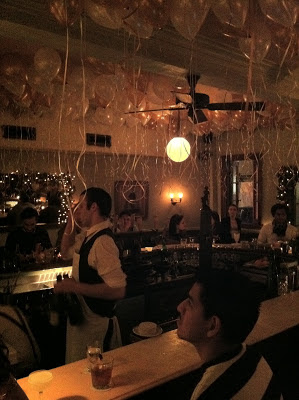 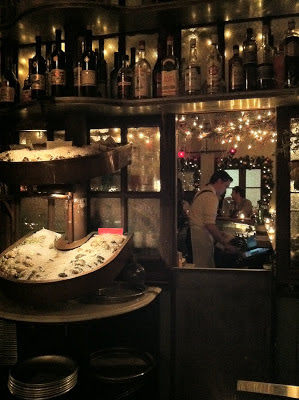 On the way back into Brooklyn, we stopped by Maison Premiere and went in for some oysters. This is a cute little Prohibition-style joint, dimly lit and with a fantastic oyster menu, as shown below. This place is owned by Josh Boissy and is known for their sharply dressed bartenders and French Quarter-inspired drinks. There was something sleepy about this place and so you should definitely go when you are prepared for a long, sexy night. The main draw is that every night from 4 p.m. to 7 p.m., all oysters and clams are just $1 each, which is a great deal. 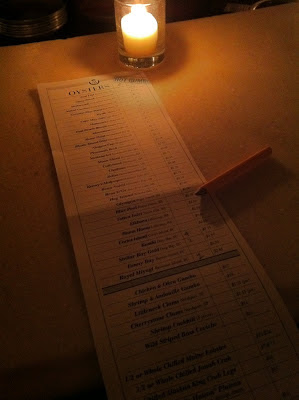 There were three places that I wanted to try in the Brooklyn area, one is Fatty Cue and the second was Franny's. Franny's is an all-organic outpost which doesn't take reservations (which is why I've missed it three trips in a row) and I was told that Fatty Cue is Southern BBQ on crack, kind of fusion barbeque. I was looking forward to the mingled smells of wood smoke, sizzling pork fat, and burnt sugar from the smoker and I'd heard of their dishes like the pig's head and the Malaysian style thick-cut bacon, roasted with coriander. I will definitely go back with Z. as he would be very intrigued, but when I was there, they were still closed for renovations, so we went to Brooklyn Star. The menu we had was their festive menu, so it is probably not representative. 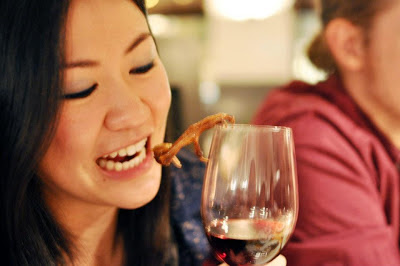 We started with East Coast oysters 3 ways: Apple crisp, jalapeno salsa and blood orange gelée. Sometimes when you go for a set meal, the opening dish is kind of like the first shot across the bow. Does it knock the lights out or does it kind of fizzle? In this case (and notwithstanding that the oysters were served on a cracked and shabby, perhaps oh-so-Brooklyn-enamel plate), the oysters weren't that fresh, large or tasty, even with the different marinades. I could only really taste the apple crisp and even then, it's not exactly something that goes well with oyster. 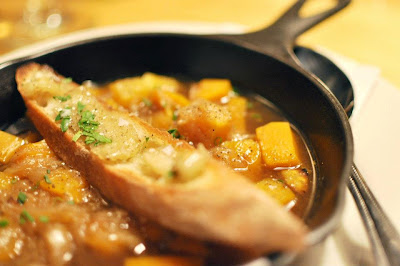 The second and probably the most memorable dish was the warm, comforting pumpkin soup with bone marrow, served in a small iron skillet. I appreciated the deftness of the bone marrow but the pumpkin soup was essentially broth with cubed pieces of pumpkin in it, which I felt was rather insubstantial. By far the best part of the meal was the roasted pigeon, light, clean-tasting and beautifully presented, it was the delicious highlight of the evening. It was however, woefully small, with half a bird per person being just enough for a few mouthfuls. 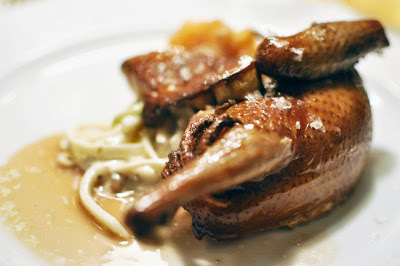 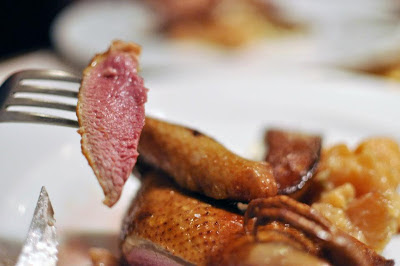 The dish that I had the biggest issue with was dessert. It was reconstituted and I don't mean re-cooked, it was simply plated- two Milk Bar's chocolate truffles and cheese with raisins and honey. Was it wrong of me to feel super cheated? If I wanted to eat Milk Bar's chocolate truffles, which, to be fair, looked ugly but were just divine, sumptious and rich, I could have bought them at any one of Milk Bar's own four street-side locations. Plating cheese and drizzling honey over also doesn't make a dessert, even though, ok, ok, it probably brought the whole menu to a cheaper set price, dessert is probably not their forte anyway and I was a bit jet lagged toward the end of the meal. 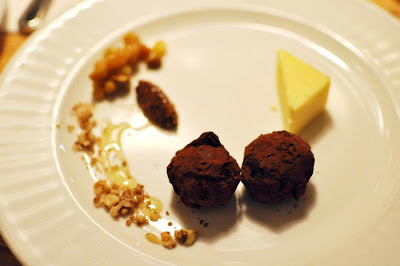 But not so jet lagged as to feel that this was a travesty of a wasted restaurant option. It wasn't bad, it just wasn't outstanding to me, particularly because the letdown was not in the cooking, as much as it was the basic provision of food. If this was a Southern restaurant, where were the fried green tomatoes and molasses brined pork chop? I don't know if the staff were rushing to go off or they couldn't be bothered to show up and make any of it but the restaurant seemed quiet, instead of humming. The only pity is that I don't know now if I would come back for brunch, which I'm told is their best menu. Apparently they have the best shrimp and grits in town and their chicken and waffles, mac and cheese and biscuits and gravy are really good (essentially none of the foods we tried were what they were well-known for) so perhaps I will make the trek back just for those. 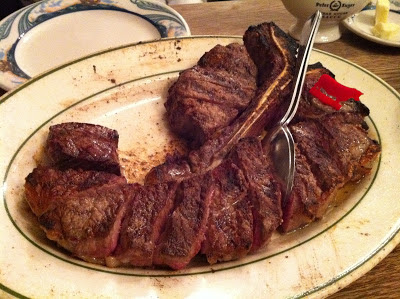 The last and most anticipated stop on my Brooklyn itenary was Peter Lugur's. This venerable steakhouse has been name the top steakhouse by Zagat 29 years in a row. It has it's own entry into Wikipedia. They only take cash, or their own Peter Lugur credit card. They have a documentary filmed about how they select and process their meats. Their brick building dates back to 1887 and is visible from the Williamsburg bridge. Their reservations are filled two weeks to a month ahead of time and the entryway and bar fill up with gold Rolex-ed fat, white bankers and dark-haired, sharply dressed male traders, every single day. Do I really need to go on? Basically, there's nothing to tell. You just have to go there and experience it for yourself. 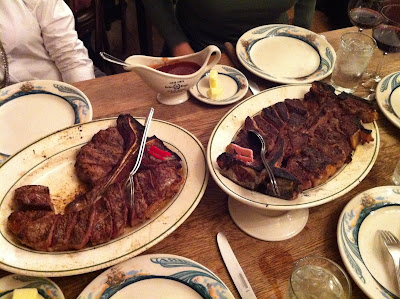 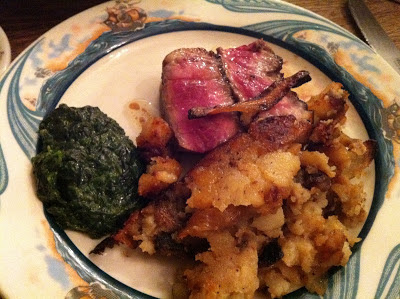 The Lugur family were German and the inside of Peter Lugur still looks like a dark wood German beer house. In the 1950s, the restaurant was traded, as the neighborhood was filling up with Hasidic Jews, whose kosher rules forbade the eating of Luger’s hindquarters (and probably also the fratenizing with Germans). If you walk around Peter Lugur's during the day, you will still find a charming scene of groups of Orthodox rabbis and stores of the huge Hasidic Jewish community, one of the biggest in the world. The menu at Peter Luger is sparse, with the focal point being a porterhouse steak sized for one to four. Steaks are served pre-sliced on an inclined plate so that the fat runs down the plate. Further, the edges of the plates are heated to approximately 400 degrees Fahrenheit, allowing diners to cook their steak further if they so choose. 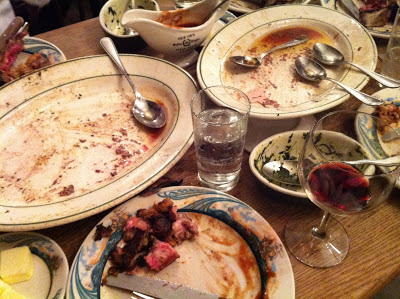 Their meat is so good. Take it from someone who has eaten more than their fair share of steaks and who cooks a mean 2-inch thick USDA prime smoked steak- there just isn't any comparison. This is the best steak I've ever eaten. I even like the cream spinach, broiled potatos, thick-cut bacon and notoriously poor service that goes with it. This was the scene of devastation after 5 of us shared two steaks, four sides and dessert. It was absolutely divine.
Posted by Weylin at 1:37 PM