We returned to New York City in time to suffer the brunt of Hurricane Sandy. Although the Village was spared the severe flooding and gale force winds that tore through some other parts of the city, as with the rest of Downtown, we were plunged into darkness and crippled with uncertainty as to when power would be restored. 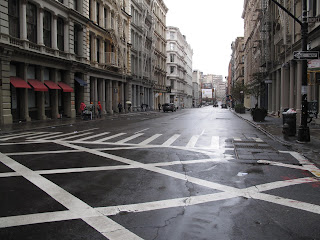 With the lack of power, downtown Manhattan very quickly became a ghost town. The eerie silence that permeated the avenues, the streets and the boulevards was like something out of a post-apocalyptic film: there was no traffic on the roads, people were walking around aimlessly and shops were grimly shuttered. You don’t realise how utterly reliant we have become on electricity until you have to navigate your way in the oppressive darkness by flashlight, shivering under the covers as the cold creeps in through the windows and walls into an unheated room.

After a couple of days with no end in sight, we decided we had to seek shelter and safety uptown. Through the kindness and generosity of friends, we were able to put up in the upper east side, a part of New York that was not originally on my itinerary. Y and E, if you’re reading this, our many grateful thanks once again. 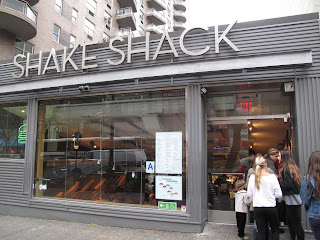 No visit to New York City would be complete without a burger and shake, and very few places are better for that than Shake Shack. S had never been to Shake Shack before, and as we were stranded without lunch plans, it made sense to stop by to take some food away. Given that school was out for the week, it was no surprise that Shake Shack was packed, with a line spilling out the door onto the street. Of course, it helps that the Shake Shack burgers are addictively good; so much so that S wanted to have them for lunch everyday. Fortunately, there were plenty of other things to eat around the upper east side. 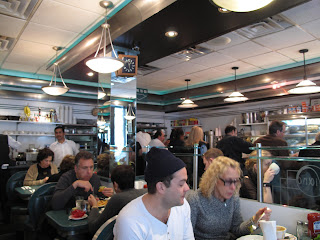 Interestingly enough, despite the reputation that uptown has for being posh and frou-frou, it’s still possible to find traditional diner fare harkening right back to the 1950s. 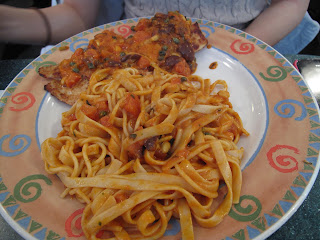 Of course, that also means that the portions are huge and the cooking is not particularly refined. S’s snapper pasta was straightforward and got the job done, although the pasta was slightly overcooked. 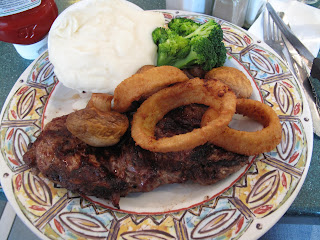 The onion rings which came with my sirloin steak were coated with a thick, unpalatable batter, but the huge scoop of mashed potatoes was lush, creamy and absolutely smooth. The steak itself had been broiled but was meaty and robust, as any good sirloin should be.

Judging from how brisk business was at lunch that day, it would seem that the upper east side still has room for an old-fashioned greasy spoon that churns out solid, reliable dishes with heart and at affordable prices. 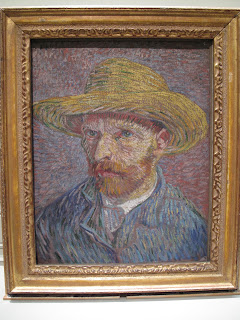 Being in the upper east side, the obvious tourist attraction is the Metropolitan Museum of Art, with its sprawling exhibitions and helpful attendants, although a large section of the museum remained close in the wake of Hurricane Sandy. 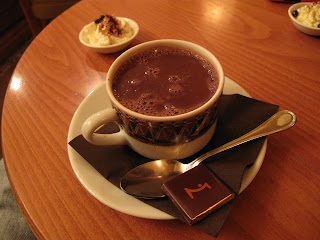 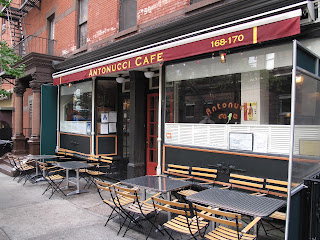 The great thing about New York is that good food is so abundant that there may be a fantastic restaurant just two blocks down that you’ve never been to or heard of. Happily, with Google, Yelp and other such services, it’s not hard to discover your new favourite lunch venue. Not too far from where we were was Antonucci’s Café, a delightful Italian restaurant that still does things old-style: striking Italian beauty manning front of house, waiters dressed in smart white shirts and black vests, and starched linens on the tables. 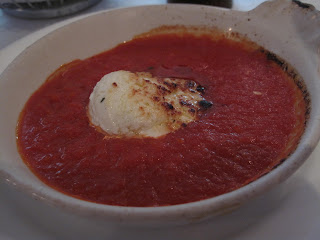 When our bread arrived, we were somewhat surprised that no butter or olive oil accompanied it, but we were more than assuaged when we were given this complimentary helping of warm tomato passata and goat’s cheese. On a chilly autumnal afternoon, it was beyond comforting to have goat’s cheese melting into and enriching the warm, savoury and delectable tomato sauce – bread never tasted so good. 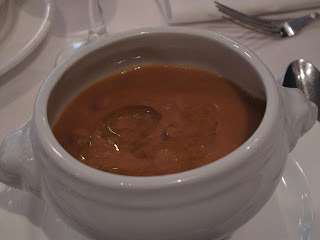 I was feeling hungry, and decided to order the soup of the day: a thick white bean soup – a sort of liquid pasta e fagioli. With a drizzle of olive oil, this hearty appetiser hit the spot and then some. 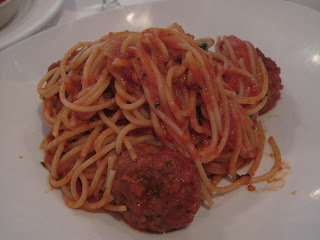 Perhaps as a result, I had difficulty finishing my spaghetti with meatballs (although the enormous helping of pasta may have had something to do with it). As with all good meatballs, these fell apart quite easily on my fork tines, being only loosely held together with breadcrumbs and/or egg yolk, revealing the glorious combination of beef, pork and veal within, all flaked through with garlic and herbs. What’s not to like? 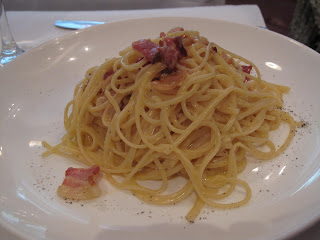 S’s carbonara was just how an Italian grandma would have cooked it: not a drop of cream but just perfectly cooked pasta, salty pancetta, and egg yolks. Definitely not a dish to be nibbled at, and we had to respond rather sheepishly when the waiters whisked away our unfinished plates, commenting that “next time you order half portions”.

Antonucci’s may not have served us the most sophisticated or refined dishes, but it was precisely that rusticity and homeliness, combined with a deft control over traditional ingredients, that made the meal so enjoyable.

Colin, thanks so much for visiting Shake Shack on your trip to NYC. It always makes us happy to hear when guests have great first experiences at the Shack.

Hope you had an awesome trip (even with Sandy making an appearance), and our team can't wait to see you again next time!