Recipe: Hummus with the Bamix 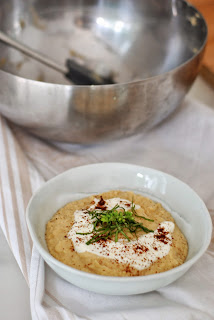 * The following recipes were produced with a Bamix which has been on loan to us, it is not a paid advertorial but we did not pay to test the equipment.

The Bamix is a Swiss consumer kitchen tool, a powerful immersion blender advertised most famously, by Gordon Ramsey. The chief advantages of the Bamix are that it has a much higher speed than most immersion blenders, it has several different head attachments and can be used directly into a hot stockpot, over the stove.

It is advertised as being able to grind sugar, cereal, spices, crush ice, chop ginger, raw, cooked or frozen fruit and rasp and slice vegetables, legumes or cheese. I’ve never owned an immersion blender and have been performing the above functions with a processor, nut grinder and regular grater or mandolin, but the attraction of being able to do them all with one machine is compelling. However, my concern is that immersion blenders tend to be quite hard to control and was not clear that certain tasks, like the grating of nuts, can be done with the specificity that you can achieve with a hand grater, for example.

The first dish that I attempted was a really simple one and driven by a simple reason also. Have you noticed that deli foods have become super expensive in Singapore? The price of hummus or spinach dip, seems to be directly proportional to the number of white expats in Singapore and both are reaching ridiculous proportions. Every centrally-located deli or bakery now sells them and I would too, because the profit margin must be huge. A thin little tub at the supermarket will cost you $5 but at a bakery, it can be $8 for a few smears on bread. Yes, I understand, it is for the ambience and the combination of prepared foods but not everyone has the means to live like that.

To make it yourself, is simplicity itself. I had a can of chickpeas, leftover from when I had this idea that I would eat more legumes in salads- you can imagine what happened there. I researched some recipes, all of which seemed to call for roughly the same ingredients.

Doesn't that sound basic (and cheap)? It took me about 5 minutes to make, probably less because the can had a pull top tab, I love it when cans have pull top taps, even though I've upgraded my can opener, I still hate screwing it around the can lid, with a passion. Tahini is a paste made from ground, hulled white sesame seeds and it's used primarily in North African, Greek and Middle Eastern cuisine. It's served as a dip of its own or used as a major component of hummus, baba ghanoush and halva. It's hard for me to imagine, as tahini has a very strong taste of it's own.

I didn't have any tahini, so I substituted with a tablespoon and a half of liquid Japanese white sesame dipping sauce, the kind that I keep for steamboat. I think you can add any white sesame-derivative product really and I like to add a little less or keep it diluted, as I don't like too strong a sesame taste. Three cloves of garlic will produce a fairly spicy hummus, I like it that way, our 4-year old goddaughter did not. 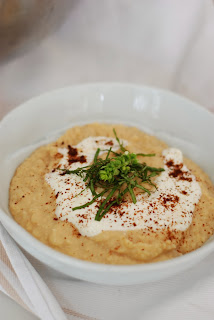 All the ingredients go into a bowl and were blended with the Bamix, then served with a topping of fresh yoghurt, sprinkling of paprika, thinly-sliced basil and some fresh sourdough crisps. This serving is probably about two thin tubs, or else $16 at retail prices, as versus the cost price, which is conservatively $3-4.

As you can see from this photo, the spread isn't actually that smooth. This was one of the concerns that I had with an immersion blender and it is one reason why I will be trialing it with food that has some degree of husk and fibre (broccoli, tomato skins, chickpeas, corn). The Bamix of course, can be used to perform simpler functions like salad sauces, but to be honest, that only requires a spoon, so I chose hummus because you can't really smash chickpeas with a whisk or spoon. A chunkier hummus is fine with me, in fact I prefer it that way, but if you want a smoother paste, you would have to either use more liquid, blend it for longer or use the whip attachment on the Bamix (however, I suspect you would not be able to aerate/whip, without adding more liquid). The Bamix, however, did not get hot during the time that I was grinding the hummus and it is indeed more powerful than other immersion blenders, like the Kenwood.

Another drawback of the immersion blender, not specific to the Bamix, is that it splatters. This is particularly true if you are grinding foods without enough liquid to immerse the rotating head of the blender and if the food is not mushy-soft. There were pieces of chickpea on the backsplash wall and depending on the size of your bowl, you may have to 'chase' your contents round and round. This could be solved with a regular processor, which has a blending cup to contain your ground bits- the Bamix SwissLine ($499 in Singapore) does come with a processor, coiled cordset and 1000ml beaker. The Bamix Magicwand, which I was using, doesn't have the beaker but has similar functions at a more entry level price.
Posted by Weylin at 12:48 PM