Recipes: Soups with the Bamix 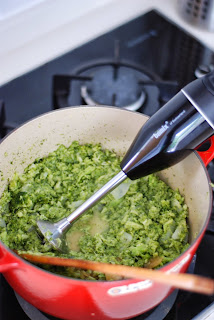 I was pretty excited this weekend about making some soups, as I had been craving broccoli soup for awhile. Why broccoli? I don't know, I don't even like broccoli. But something in Gordon Ramsey's broccoli soup demonstration had set off a sub-concious desire for the grassy, musky taste. Soups are another way of keeping very healthy and the perfect antidote to gluttony and sloth. Combined with a juice fast, they make for an excellent and filling, liquid diet. 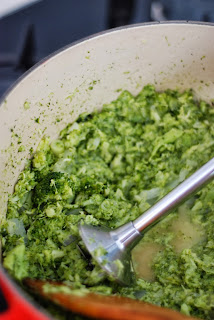 According to Gordon Ramsey, broccoli soup is as simple as blending broccoli, with the water they were boiled in, in a blender. I stewed 4 medium heads of broccoli with onions, pesto and pork bone stock, for about 15 minutes (yes I know, too long but the nutrients would still remain in the soup or so I hoped) then blended it with the Bamix attachment. The Bamix made good work of the florets and stems but the individual match-stick heads of broccoli were still remaining. It is really difficult, perhaps almost impossible to get a thoroughly smooth broccoli soup and using the whip attachment of the Bamix did allow it to be more aerated although the whipping function does not chop the pieces any finer. 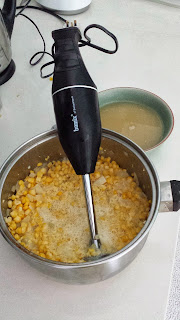 One of the concerns that I had with an immersion blender and it is the reason why I am trialing it with food that has some degree of husk and fibre (broccoli, tomato skins, chickpeas, corn) is because I wondered outloud if the blending function would be enough to puree food to an absolute smoothness (without overheating the motor, especially). I made some corn soup by stir frying corn pieces, together with a chopped white onion, spring onions and pork bone soup. I love how corn kernels plump up!

As you can see from the above, I really just pureed the corn kernels, onion and stock together, then added some milk (or you can use soy milk) to keep it viscous. I usually make my corn soup and corn gazpacho from putting the kernels through a Korean cold press juicer, known as the Hurom. The Hurom, instead of crushing (like the Phillips juicer), has a large internal screw that grinds out the pulp from the husk. This effectively presses out the juice, without leaving the skins of the husks in the soup. Although the Bamix did a pretty good job of blending up the soup, there were still pieces of corn husk it in, healthy and nutritious I know but for a cold, smooth gazpacho, I would probably still use a slow juicer. It did make short work of the onions and as a tool, the Bamix is very safe and nifty. It can be operated by a young child and the corn puree was judged very nutritious and got a warm reception from the babies we fed it to. 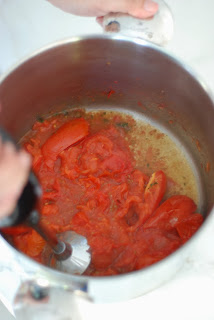 Any time that you can buy ripe Roma tomatoes for cheap it is worth it to do a roast tomato soup or even to puree and freeze them for your next batch of tomato sauce or bolognaise. You can see how red and ripe these tomatoes were- I simply roasted them with sea salt, thyme and rosemary without any oil, in the oven, for 20 minutes and then blended them in their own juices. 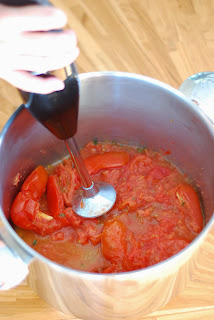 In a deeper pot, the Bamix blend and whip function made short work of the tomatoes. The Bamix was also able to go directly into the hot vegetables however after awhile, it does start to heat up. The lower part of the attachments in particular get really hot and I was concerned about that. The roasted tomato soup, garnished with black pepper, cream and Thai basil (chervil, lemongrass or cilantro also make a nice counterpoint) is shown below. You can still see some of the seeds from the tomato and I could also taste the skins of the tomato, which meant they had not been completely shredded. 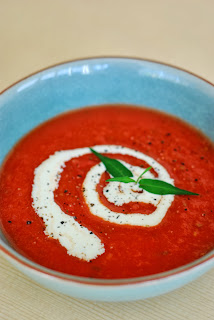 This tomato puree can be used as a soup, it can also be evaporated over the stove to make a tomato puree over pasta, or else used to cook down bolognaise. It was easy to make as well- quick, wholesome and delicious.