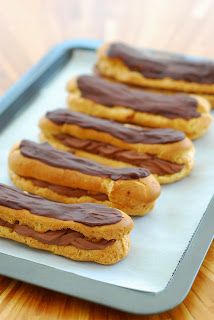 I decided to make something just a little special this holiday weekend. There are a few things that I've been filing away and some foods that I really enjoy and would like to learn how to make for myself. Eclairs are definitely one of them, I grew up eating these, they were a special treat from bakeries like Sweet Secrets and they were my dad's and brother's favourites (as I got older, I realized how unhealthy they probably were and also stopped being such a fan of chocolate). Choux pastry is a light French pastry which utilises moisture to create an airy, hollow dough (remember those choux pastry swans?) and it's one of the first forms of pastry that you would learn in cooking school. I remember learning this in food and home economics classes when I was 14 and being fearful even then, of the vigorous cooking process required to produce a risen choux dough.  Most people quote Pierre Herme's recipe as is, but it is really the execution of the technique (maybe as with many Pierre Herme recipes) that is all-important. 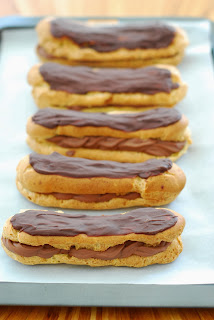 The recipe is as follows, there are three parts to the recipe, the choux pastry exterior, the chocolate pastry cream that is piped inside and then the chocolate glaze that goes onto the top of the eclairs. The choux pastry is by far the most difficult and time-consuming part. Choux pastry is really misleadingly simple, the milk, water, butter, sugar and salt are melted in a heavy bottomed saucepan and when the mixture is at a rolling boil, the flour is added all at once and then beaten with a wooden spoon around and around the base and sides of the pot until the mixture comes together into a smooth ball. This is transferred to a mixer with a paddle attachment, blended till cooled and then the eggs are added one at a time until the dough forms a smooth ribbon. 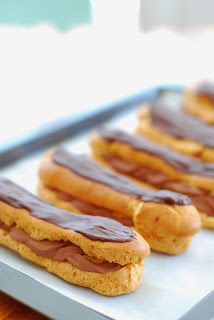 The real skill in choux pastry is the technique, how long you 'macronage' your dough for (which in our case, was too long, it should be about 3 minutes), how neatly you pipe and whether you use an egg wash to smooth over the surface (which we probably should have) and how accurate your baking time is. I've gone back to reading manuals that say that the baking time should be 45 minutes at 180 degrees in a pre-warmed oven. I don't really believe this as we did 17 minutes in a 170 degree oven and it did not seem quite enough to dry out the dough completely and prevent shrinkage, but the dough was starting to get really browned. Other tips were to bake it for 7 minutes, then slot a wooden spoon into the door, allowing the temperature to drop gradually while baking, for another 12 minutes, then to rotate and bake for another 8 minutes. Apparently these should be taken to the edge of brown, so that they do not collapse with internal un-wicked moisture, when finally removed from heat. 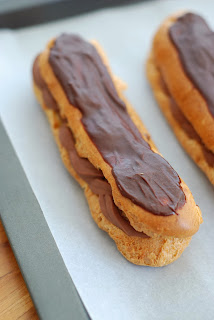 The eclair shells are then cooled, sliced open with a serrated knife and dipped in ganache, then filled with cooled pastry cream. I prefer to slice open the eclairs, as opposed to filling them by piercing a few holes along the underside of the eclair body. The taste of the fresh choux, light, almost crispy, flavourful with that vanilla-eggy warmth and the richness of the Valronha chocolate, those are all good reasons to make your own eclairs. This recipe made and filled about 14 eclairs, each about 3-4 inches long. On other blogs, it apparently makes 24, but I don't really believe that. It's also important to eat the eclairs fresh or at most overnight, as the pasty does get soggy.


In a small saucepan, bring the milk to a boil. In the meantime, combine the yolks, sugar and cornstarch together and whisk in a heavy‐bottomed saucepan. Once the milk has reached a boil, temper the yolks by whisking a couple spoonfuls of the hot milk into the yolk mixture. Continue whisking and slowly pour the rest of the milk into the tempered yolk mixture.

Strain the mixture back into the saucepan to remove any egg that may have scrambled. Place the pan over medium heat and whisk vigorously until the mixture returns to a boil. Keep whisking vigorously for 1 to 2 more minutes (still over medium heat). Stir in the melted chocolate and then remove the pan from the heat.
Scrape the pastry cream into a small bowl and set it in an ice‐water bath to stop the cooking process. Make sure to continue stirring the mixture at this point so that it remains smooth.

Once the cream has reached a temperature of 140 F remove from the ice‐water bath and stir in the butter gradually. Return the cream to the ice‐water bath to continue cooling, stirring occasionally, until it has completely cooled. The cream is now ready to use or store in the fridge- I find it useful to make this pastry cream a day before, as it stores well.


Boil the cream and pour over chocolate, stirring till melted smooth. When slightly cooled, add the butter. The glaze should be used when slightly thickened and can be brought to a pouring consistency with the addition of more cream.
Posted by Weylin at 11:14 PM