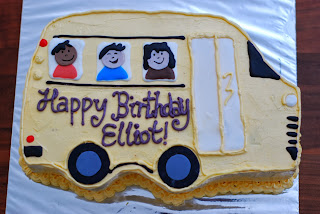 We were tasked by P to make a school bus cake for her little boy, Elliot, who is mad about buses, trains and all manner of transport. Her brief was a tasty, full buttercream cake, which we were really excited about. The cake, lemon-blueberry, came out high and beautifully risen, I was so proud of it! As I sliced it up, I could see it was crystalline and crumbly. Carving a cake was actually a lot of fun, I had never done it before, but I've always been in love with shaped cake. Remember when you were a kid and we had those cakes in the shape of numbers, or animals? 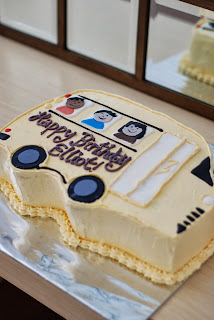 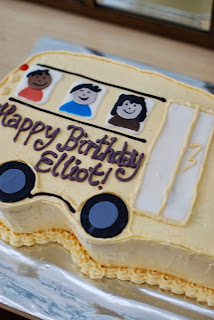 The cake had four layers, which were sandwiched with a lemon-passionfruit-mango buttercream. The buttercream on the outside of the cake was a crusting buttercream but it crusts better with more shortening. As I don't like shortening, mine was somewhat soft and not as stiff as I would have liked. I can see though, why people like to use shortening, the smoothness of the application is quite awesome. I then piped on the details and used royal icing for the windows and doors. I wound up having to re-pipe the words in buttercream (the icing piping just didn't hold as well) and that also affected my once-smooth buttercream finish. 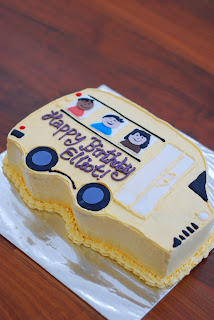 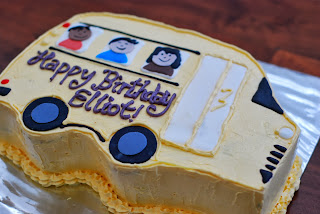 This cake definitely made me smile. It isn't the most sophisticated of cakes but it was so darn cute, fun and innocent. And in terms of taste, I have to say this was possibly the fluffiest and most natural tasting cake, compared to the more finished fondant pieces. Happy Birthday Elliot and we wish you a most wonderful and blessed ride!
Posted by Weylin at 10:37 AM