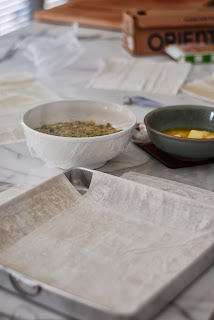 Baklava is a rich, sweet pastry made of layers of filo pastry filled with chopped nuts and sweetened with syrup and honey. I think one reason that this dessert is so popular and accepted, is that it has roots in many old civilizations of the former Ottoman Empire, in places like Mesopotamia and in the Byzantine era, spread across Central and Southwest Asia. The word baklava is first attested in English in 1650, and may come from the Mongolian root 'bayla' which means 'to tie, wrap up, pile up'. Although the history of baklava is not well documented, it is suggested that it's current form was developed based on a Central Asian tradition of layered breads. 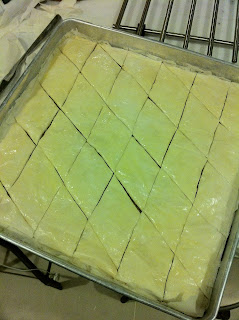 I find baklava one of the easiest and possibly cheapest, desserts to make, even though if you buy it in Singapore, it is usually quite expensive (I'm told up to $8 a slice at Suntec City, which seems an extravagant mark-up). In fact, I keep a pack of frozen filo pastry in my freezer just for the purpose of throwing together a last minute dessert should we have a group over for dinner or if we are invited to someone's home. The ingredients are merely filo pastry, pistachios, butter, sugar, orange peel and heat. The odd thing about baklava is that it tends to attract a polarisation of views, some people dislike it intensely for it's sickly sweetness and buttery texture, some people just love it and are fanactical about the proper way to make baklava. For example, there are a few recipes that mix different nuts, like walnuts, hazlenuts and pistachios in fractions, but purists say that only pistachios should be used. Also, I cook my syrup with orange peel, which isn't as strong, but many people will attest to using only orange blossom water, for a more flowery and scented taste. ﻿ 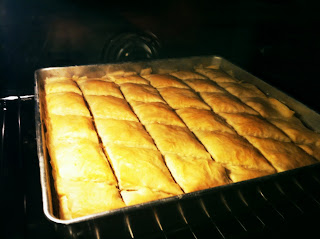 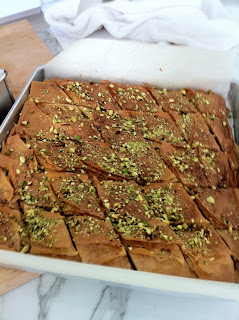 Method:
1. Preheat oven to 150 degrees C. Pulse the nuts, cinnamon & sugar in a food processor until you
reach a slightly coarse consistency.

2. With a pastry brush begin by brushing the bottom of a 9X13, or similar pan. The size of the pan is not too important, it will affect the height of your baklava but the process is still the same.
3. Layer 8 sheets of phyllo dough, making sure to brush butter between each one. I like to lay my sheets in both directions, as shown by the picture above. This is to make sure that there is less spillage of the nuts between the layers. I also try to save the beautiful, untorn sheets for the top of the baklava and to use up any more mangled sheets in the middle. Lastly, when forming the baklava, I tuck the sides of the top most sheets under those below, again, so that the nuts are trapped inside.
4. Spread half of the nut mixture on top of the 8 sheets.
5. Layer 8 more sheets of phyllo dough. (If your pack of pastry has fewer sheets, just divide the number by three, as essentially we are making three sections of dough, in-filled with two layers of nuts).
6. Spread the remaining half of the nut mixture.
7. Top with the remaining 8 sheets of phyllo, making sure to brush the top layer with butter as well.
8. Slice the baklava into small diamonds (approx 24-32) then bake for at least 2 hours until slightly golden brown on top.
9. While baklava is baking, make the syrup by bringing all the syrup ingredients to a simmer over medium heat. Continue cooking over low heat until mixture becomes syrupy (approximately 10 minutes), then remove from heat and allow to cool.
10. Pour cooled syrup over the baklava as soon as it comes out of the oven and allow to come to room temperature again before serving. The important thing is that either the baklava or the syrup has to be hot for the syrup to be easily absorbed, if not, you will wind up with a sticky mess. 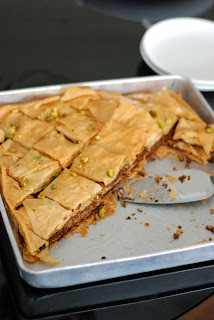