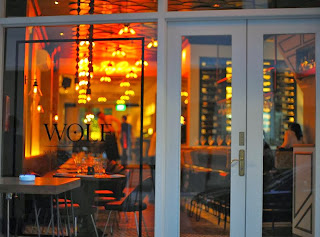 This past weekend, we were very fortunate to be part of a small group that tested some of the dishes that came out of WOLF, a nose-to-tail restaurant, the latest project by Yuan Oeij of the The Prive Group. The restaurant is heavily influenced by London restaurant St John and is helmed by Alysia Chan, the owner's niece.

Nose-to-tail eating is centered on restoring respect for the whole animal and appreciation for the lesser known parts. Because the whole animal is consumed, it is considered ecologically sound and a no-waste approach to dining that has of late, been really popular in London and Manhattan. 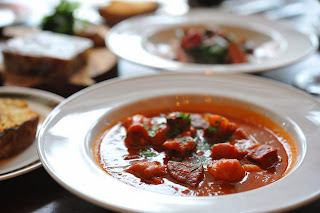 Personally, I am not a fan of offal, which probably makes me a fairly good barometer of nose-to-tail cooking and I want to put it out there that I have not enjoyed my experiences at all nose-to-tail restaurants, neither do I think it is an easy form of cooking to execute well. Like the very concept on which it is founded, I tend to find that nose-to-tail restaurants sound and look better than they actually taste. I travel a lot to obscure Asian destinations where eating the odd ends of a rabbit or a cow, isn't really by choice but by poverty, so paying more, to eat the bits which we've already ascertained aren't as prime, just seems very unappetising to me, though not for the normal reasons. Also, somehow this idea that they are doing something 'groundbreaking' (although it's no longer a new commercial idea anymore), means that the lighting is invariably dim, the service pretentious (because really, how many diners know what pig's ears are supposed to be called?) and the decor plays with glorifying motifs of cute or sympatico animals.

I have this theory that when you walk into a restaurant and you see a $8000 Mooi lamp or commissioned mural, then the food is at best, tiny and pretty and at worst, not going to be the straightforward, punchy, confident cooking that you hope. This restaurant was 'influenced' by The Spotted Pig in Gramercy and The Breslin in Chelsea also does nose-to-tail dinners- I have to say, the food here reminded me very little of both and I wasn't a huge fan of either The Spotted Pig nor The Breslin, although I understand their renown. 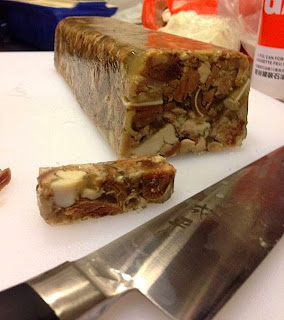 That being said, WOLF is an absolutely beautiful restaurant, the 40-seater is handsome and complete with a full wine list. The all-glass façade leads into a warm space of leather banquettes and timber tables with brass inlays of flying pigs and the attention to detail is carried through in the ceiling, covered with circular copper plates and moulding.

The centerpiece has to be a huge, roughly hewn, beautiful and masculine wall carving of a wolf. The decor is a testament to the love and effort that has gone into the restaurant and is perfection for a swanky first date or a photo shoot, the Gemill Lane stretch has become so hip and insouciant that you can't go wrong with the location. The prices are comparable to similar eateries, a 300gram rib-eye steak will set you back $68 and $38 for the beef tongue entree.


I don't want to spend too much time on the dishes, as what we tasted was a work in progress and will presumably be re-worked over the coming weeks, except to say there were many dishes that we really enjoyed on the menu. I would highly recommend the ox-tail tongue with lentils de puy, salsa verde and mint. The tongue had an exquisite texture, too often, it can become grainy and taste slightly mouldy, this meat was firm, yet pliable, had a melting and chewy mouth-feel and was perfectly offset by the slightly tart salsa verde and the rich and hearty lentils. One of the best beef tongues I have tried anywhere. 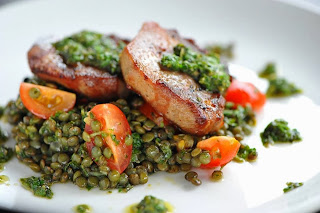 We also tried the chicken hearts in parsley, the beef lips with potato, the chorizo and octopus stew and the sweetbreads, which were all good. There were also some dishes that taste-wise, probably should not even have made it onto any tasting menu. The fennel salad with goat's cheese sounded very promising, but came out as two large, barely cooked halves of a fennel bulb, drizzled in oil and balsamic and the pear tartin, blackened to a caramel perfection at Yuan's previous restaurants Brown Sugar, unfortunately came off puffy and pallid here. 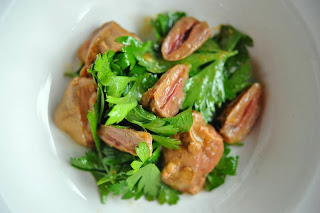 One of the weak points of the restaurant is that I don't get a sense that each member of the kitchen and service staff are seamlessly competent in what they are doing (unlike, say, blistering and tight restaurants like Esquina or Burnt Ends or Luke's, which is right next door on Gemill Lane). On the other hand, I think that might be too high a standard to hold and compared to many restaurants, certainly places like Pollen or Cataluyna, WOLF gets top marks for a more cohesive theme and taste.

Part of this is perhaps the lack of experience as they are just getting started and the chef is fresh off her Sunrice training, having then been a sous-chef at Cocotte and completed a two-week stage at St John's. It can be challenging to micro-manage a large kitchen staff and control the standard of every single plate of food that comes out, which may be why there were hits and misses in the more mainstream dishes.

I am not sure that the taste experience here elevated the food to a new level for me, but overall, I am really happy that local restaurants and groups can be competitive and successful in Singapore's intense but frequently hollow restaurant and restaurant marketing scene, and introduce diners in Singapore to new food concepts and culinary experiences. I would definitely encourage you to wander down Gemmill Lane and step in to enjoy the buzz when WOLF is up and running.