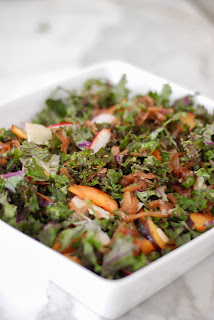 One thing that I've learnt over many years of food writing and tasting, is to appreciate my vegetables. Some people learn this as adults, either as result of a vegetable food that they particularly discover and like, or out of necessity and health reasons. This appreciation though, comes a lot easier if it is inculcated young. I recently had the misfortune of having several dinners with children who had the worst attitude toward vegetables, "Mum, I don't want to eat any of this Green Stuff" they howled, about the tiny bits of green herb on their buttered buns (they were eating burgers, for crying out loud) and I made the mistake of assuming most mothers would swiftly if gently correct this behavior. I was even prepared for a lecture. But, lo, they proceeded to find a knife and scraped off the green for their children! 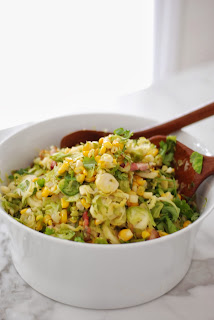 I don't know if they were politely trying to avoid a tantrum or if they deliberately allow and encourage poor eating habits, but some mothers tell me their children have their greens blended, their favourite foods are meat and carbohydrate-heavy or that they themselves don't eat vegetables. Which is a bit sad because apart from being truly good for you and generally a fat-free food, they are missing out on an experience of food, cooking techniques and flavour that is so essential and varied. That keen sense of healthy nutrition and subtlety of flavour is, especially in today's world, one of the best gifts you can teach.

As you know, we have been using our smoker fairly often (more on this later) and while we've been branching out to try different kinds of meats, such as pulled and crispy pork, prawns, salmon and the variations of beef provenance and feed, from jamon iberico pork jowl to Argentinian grass fed or USDA prime rib, it has also given us the opportunity to experiment with sides. At first, I just prepared steamed sides, I love this because it's simple and quick to do and it makes use of the new variety of vegetables that we have in Singapore. I remember when I was growing up, we had local vegetables with local names- chye sim, kang kong, kacang botol and there wasn't a brussel sprout to be had for love or money. How far we've come since! Even though vegetables, like all food, have been going up in price, the volume and availability is still relatively good, especially if you shop at a wet market or a wholesaler. 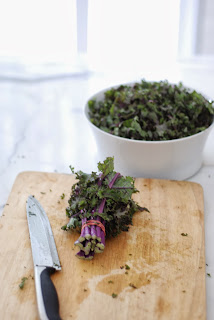 Waking early would reward us with steamed platters that I particularly enjoyed, tri-coloured carrots (the purple ones are available in supermarkets, for the same price as washed packaged carrots) and broccolini. I would also make a simply, garlicky bruschetta, drizzled with vinegar, olive oil, sea salt and thinly sliced stripes of basil, to take advantage of the different types and colours tomatoes available.

One thing that I have been keen to do is to increase the proportion of vegetables in the meals (which would require more than steaming) and widen our repetoire of vegetable sides, in particular, create some innovative combinations for salads that will complement the meats while showcasing unique ingredients of their own. 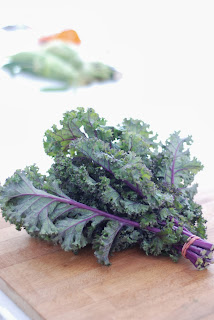 One salad that I tried in San Francisco (also more on this later) was a beautiful local kale salad at Frances Restaurant. I had never really had kale before, here and there, in juices, soups and mixed salads but never in a single bowl that made the ingredient shine. Kale is all the rage across the US and UK, it's as if chefs have suddenly decided that this menu item is hip. I didn't realize for example that there are different types of kale, lacinato or black kale, red kale and green kale.

Lacinato is the type of kale that is commonly found in Tuscany and this is what the salad was originally made with. This I found in Singapore at Supernature ($14.50) and when it ran out, as it often does, I picked up a more asian variety of kale at Eat Organic ($11.50). While this variety was cheaper, it had a thick stem (like kailan), which meant quite a lot of wastage. Of late, I have found Cold Storage muscling in on the twice-a-week delivery of kale to the organic stores and red and green Australian kale has popped up on their shelves ($10). So this vegetable is a luxury in Singapore, but this does make an entire, large salad that easily feeds more than 10 people.

Red kale should really be called purple kale. It's beautiful to photograph. 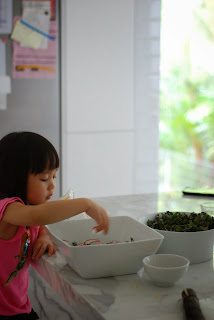 I washed out the leaves and flicked them, then towelled them dry (no need for a spinner here). Lining them up, I sliced the leaves finely from top downward, stopping when I reached the central stems. I reserved the last parts of the kale for juicing the next morning, it goes well with and balances out the sweet of pineapple and green apple juice.

The salad is simplicity itself to make. Thinly slice a half cup of toasted almonds, a small piece of pecorino romano and 4 small, baby radishes with a mandolin. Slice up two peaches or two plums into thin layers. Layer the salad leaves with all the ingredients. See, so simple a child can assemble it. 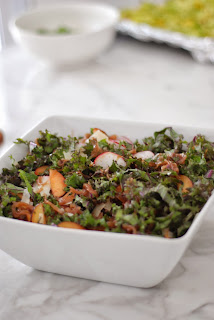 To make the salad dressing, thinly slice two red onions and caramelize them by heating them in a pan until softened, then adding two tablespoon of white sugar, waiting for it to melt and then two tablespoons of balsamic vinegar. Swirl through to cook thoroughly, then remove from heat. Add olive oil and white vinegar to the mixture in the pan to form a thin dressing with the carmelized onions and pour over the kale salad when cooled or ready to serve, keep refrigerated otherwise  so the kale remains crisp. 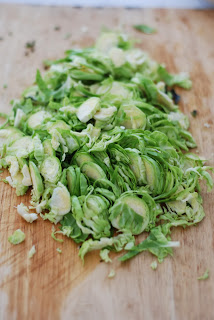 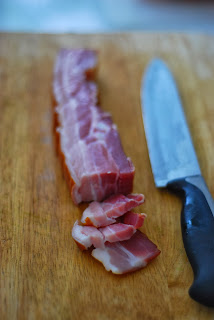 I try to make a warm salad and a cold salad, so I sliced three handfuls of brussel sprouts finely. I probably used 30 sprouts for a huge bowl of salad, there was excess from 10 people. There are several ways to cook brussel sprouts, for years I thought people ate them only in their full green glory, boiled and so I was never a fan. Then I discovered that the sulphuric smell comes from defensive chemicals contained in the sprouts that are activated when they are over-cooked. This and the complex sugar raffinose, also contained within cabbage, sprouts and leafy vegetables, will create flatulence (just saying..). My favourite way to cook these is to stir-fry them just until they are soft and then to roast them in the oven. If you stir-fry them for too long, I find it really brings out that bitter note in the sprouts, whereas roasting them makes them caramelize to a more balanced sweetness. 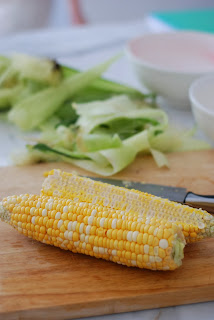 Slice up some bacon, I like to use thick chunks of bacon and then cube or julienne the slices. Slice kernels of corn off two cobs. Another highlight of weekend morning marketing, I picked up these beautiful full ears of corn, still in their husks. Peeling off the husks always makes me feel like a prairie woman- poor deluded urbanite! You can really tell the difference between these ears and the skinny ones that I find in the regular supermarket, the kernels are so much larger, juicier, sweeter and plumper. I fried the bacon in some oil then added the brussel sprouts and corn, and about 100ml of water, frying just until the corn plumps up. 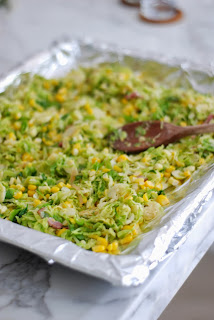 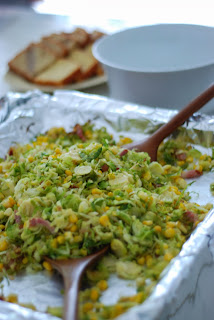 Then I tipped the mixture into an oven tray and roasted until the sprouts were cooked. While ladling them back into the bowl, I added fresh chopped cilantro. I like my salads rather plain, because I associate that with home-cooking, if you need more salt or oil, you can add fried shallots, or pepper, or even a dash of sour cream and slices of red peppers.

If you have a favourite salad recipe, send it along to me, I would love to try it!
Posted by Weylin at 11:58 AM