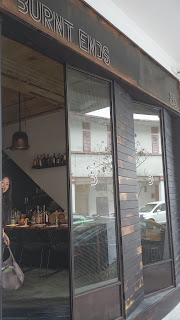 Ladies and Gentlemen, stop the presses, I'm crowning the new It restaurant of Singapore (the last It restaurant being The Naked Finn, sometime before that, Esquina and Mozza and before that still, Luke's and way before that, Artichoke) and it is Burnt Ends. Beyond a shadow of a doubt. An It restaurant, has to have certain characteristics- it has to have absolute attraction. That is, it has to have the je ne se qois of Disneyland- that special something, that life and buzz and pace of being somewhere special, a place where you are happy when you're there, and if you're unhappy before you're there, you're happier for being there.

It isn't necessarily the structured beauty of a white-tablecloth high-end restaurant and it can be the quality of insouciance in straight-up great food, great ambience, great style, preferably in that order. It has to possess a personality, it has to be what people want. And often, I find, although you do find those rare special few places, it winds up being a restaurant that you can't eat at every day (just like how even though she is never short suitors, no one, really, can date an It girl every day, or at least, not for long). This isn't the local where you can go for a quiet dinner or a comforting meal, this is the girl-down-the-street-and-around-the-corner whom you go out with for a drink and a good time. 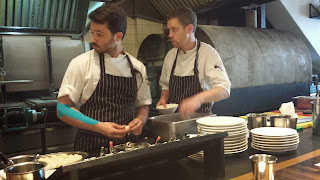 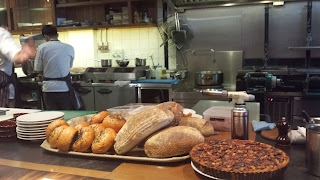 A lot of them seemed to take their marketing material and billboard fonts more seriously than the substance of their food. Many of them probably couldn't turn out large volumes consistently, never mind elevate food at a global level, with new taste combinations and flair. After awhile, they were even starting to all sound alike as we went through seasons of one-word, half noun names and then moniker odds to colours and odd geographical legacies- Chop Suey, Morsels, Suprette, OCF, The Green Door, The Black Swan, The Market Grill, The Cajun Kings.

And this is excluding the flood of Italian and semi-Italian eateries, pizzerias and wishful, wistful bakeries flooding each neighbourhood. Good grief! How is a blogger to keep up with it all? And have you seen the prices of food recently, especially food in hospitality? How can I justify paying $80 for a 200-gram steak when that is a month of commuting fare (and when I can smoke a far heavier and superior one at home for $35)? Most restaurants out there, except the dismally unsuccessful, are making a decent return from the new Singapore of free-wheeling youthful diners and free-spending expatriates and tourists, to the extent that restaurant groups have easily grown from one to five in half a decade and chefs are the new investors in eateries. 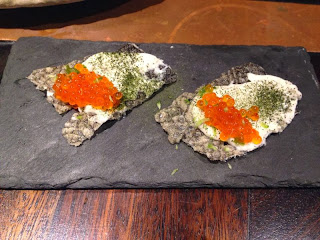 The upside is, once in awhile, a place like Burnt Ends comes along. I want to tell you their provinance is different, but it really is not. The owners here are Loh Lik Peng (Majestic Hotel, 1927, Cocotte@Wanderlust Hotel) and Andre Chiang (Andre). The space is intimate and expertly crafted. From their eye-catching giant fig tart, to their uber-thick letterpressed kraft cardstock business card, this place could fit in in Soho in New York or Shoreditch in London, it is that contemporary in culinary standard and attention to detail. Is it creative? Yes, it is. Is there much service? No, there isn't.

I had been to Burnt Ends once with a friend for a boozy lunch and made a booking to go back on a public holiday. Thankfully, it was raining cats and dogs that day and pretty much no one else was out, except the party of 6 which had the best reserved seats in the house (that later turned out to be Andre Chiang, little surprise- he also mentions Burnt Ends in his FB posts, raving about the incredible food, haha). If you make the trip down, try to sit right in the middle of the bar, in front of the chefs, so that you can take in all the action and live theatre of the kitchen. Don't sit at the ends, where you have only the smoke of the giant coke fires and the surly gaze of their sommelier. 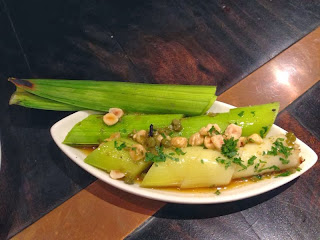 It's rare to find a place that even my mum thinks is fun and trendy, she has an even more particular palate that either C. or I and her dislikes run a mile long. Halfway in, when she said cheerfully, how I wish I could have a cold glass on white wine! I knew this concept was something that would please and impress most. We ordered a bottle of their cider, 4% alcohol, for those who are just looking for a touch of bubbly. 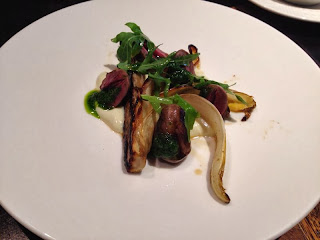 We began with the salmon skin roe that you see atop, thin morsels of flavour and briney eggs that were gone in a flash. Then their charred BBQ leeks with pasley and hazlenuts (titled Leek, Hazlenut and Brown Butter). The leek was literally black when it came out of the smoker, they peeled off the outside layer to reveal that deliciously soft and succulent interior. Ingenious and definitely something I will be trying in our own smoker. In terms of cost, this reminded me a little of Franny's in Brooklyn, that charged $16 for one similarly caramelized leek, cut into two. Although this was a huge fat Australian leek, it really is an awful mark up for something that is as cheap as chips in a wetmarket. The first time that I visited, we had bruschetta, or rather, sourdough bread slices rubbed with garlic, smoked and layered with fat italian tomatoes and a verdant green parsley basil reduction. It was excellent, no less because their sourdough bread is very good. As you can imagine, not many of the items on the menu are vegetarian but there are some small and simple vegetarian dishes like this, leeks or Cos lettuce salads to be had. 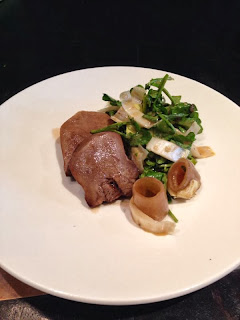 This was followed up with what I believe were duck hearts and fennel- as you can see, without a professional lens and reflector, the food doesn't look particularly appetizing but it is much more hearty and attractive in real life. Each dish was also cleverly balanced with watercress and salt, providing some sharp to help balance out the smokiness of the meats. We then had the beef tongue, with caramelized onions, followed by the grilled squid.

The beef tongues (Wagyu Tongue and Beer Pickled Onions)- I actually prefer the braised tongues at WOLF dining, because I think tongue tends to get tough when seared too quickly. The grilled squid is the most famous dish on the menu and although I liked the diversity of taste in the dish, with the corn and spring onions, the squid itself I felt was not really the right balance of bounce and chewiness. I think it was much better than ordinary squid but for an Asian palate used to some fantastic stir-fried baby octopus and sambal squids, this could have done better. All of it was well executed, just that some dishes were better than others. 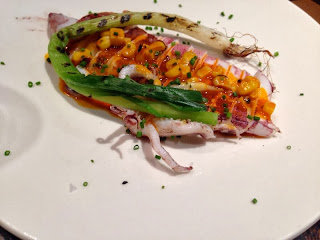 The dish that followed is the second favourite in the restaurant, the pulled pork burger (Burnt Ends Sanger), with a heap of red lettuce and their spicy mayonnaise-tomato-horseradish based sauce. This is very good, succulent and juicy, I find the sauce overpoweringly hot and peppery but the others seemed to like it. I must say that because it was split in 4s, it was a lot less gelat than when I had it in a lunch of 2. The chefs were very gracious about splitting everything for us so that we could try more dishes, which I really appreciated. The pork is served atop a freshly baked and sliced bun, which was excellent, soft, warm and pillowy. 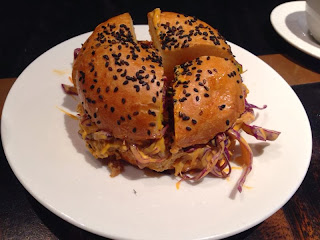 As far as the mainstay of the menu goes, this would be their beef (Flank, Burnt Onions and Bone Marrow). In the previous time that I had been at Burnt Ends, they had a fish dish, a flounder with crispy fried drippings, smooth, tender and probably my favourite dish of the day. If they had any fish when you go, that should definitely be one of your picks. The second time I went back, they had had a massive Friday night and sold out of all the several fish on the menu for the entire weekend (yes, they are doing that well). So we could only have the beef.

The chef is very good about estimating how much space you might have after you submit your rolladex of dishes and will use that to estimate the cut of beef to proportion to your party. In our case, this has generally ranged from 130-160g. As someone used to smoking 1.4kg of prime rib or rib eye, it is almost laughable to think that you can get (read: pay for) the same effect with a thin little slice of 130g beef. Indeed, on both occasions, the beef was a little charred, a little bitter on the exterior and didn't have enough of the taste of smoke. But it was very juicy and sliced beautifully on the inside, still one of the better beefs in Singapore. 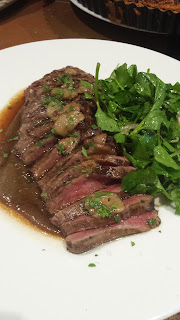 Here's a second picture of the meat, so you can see what I mean. I'm all for charred surfaces it was a lovely pink inside but when there's only 130g of meat and the outside is that black, it's quite honestly, burnt. Again, I could have used more variety in their salad (watercress) but it's the beef marrow and onion reduction sauce that really makes the dish shine. 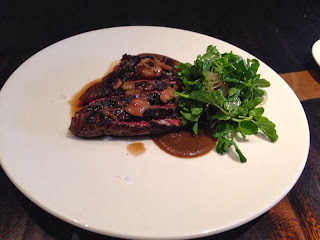 Sometimes an It restaurant is where you can pinpoint exactly how they can improve (as oppose to something mediocre where there's almost nothing much to point out). So how could Burnt Ends have been better? It could have oysters, cold, fresh, sharp oysters to cut through the heaviness and grease of the food and meat. The steak could have been less bitter, the skin had been burnt to a charred and sour skin. The desserts could have been lighter and more elevated, similarly to give a bit of clean and astringent finish to the meal.

We wound up going across the street to Keong Siak Street for their molton chocolate cake and fresh-fried doughnuts with cinammon cream, as we weren't tempted by the heavy fig tart at Burnt Ends, but what I would have really loved would be a simple lemon sorbet or a fluffy sticky date pudding with cinammon cream, or even a sharp lemon and raspberry cake. The meal could have been cheaper (we averaged about $50 a person by sharing but if you pig out with alcohol, it would be more like $130 a person) but then, hey, it won't be, because it's Singapore.
Posted by Weylin at 10:33 AM