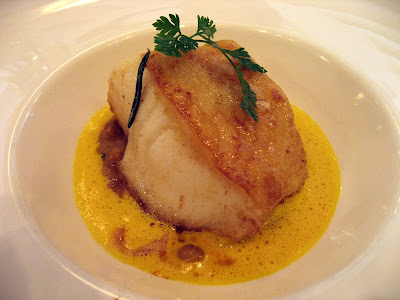 Thank you M. for the photos! This is a restaurant I visited awhile back, when I had the pleasure of Miss M's wonderful company and taste. She suggested this place which I had been wanting to try, it's located in Keong Saik street, a stone's throw away from Ember and in an old shophouse.

It's another place which has been opened by a chef-owner, previously the head chef at Les Saison. The place has been recommended to me but I was also told that the dinner menu here was a ridiculous price (and only prix fixe but I'm not sure about now), so I was happy to try it for lunch, where they had a good lunch set for $38. 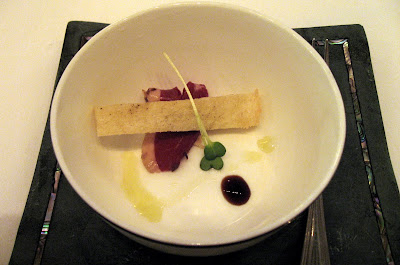 The interior of the restaurant was regular and not that note-worthy. It had great wooden ceiling cross beams but the whole room was dark wood with cream walls and non-descript paintings. It had the air of a food-serious restaurant though. 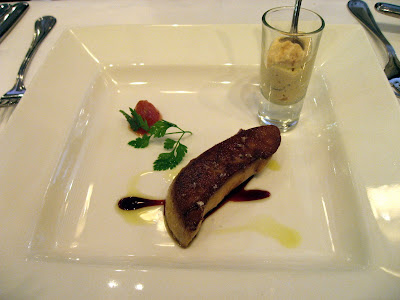 The amuse bouche was a slice of smoked duck breast served with a warm baguette, a bit reminiscent of Gunthers. The bread was fantastic, the duck was pretty decent, though not a knock-out, especially because it was over really fast! I opted for foie gras as the first course, which was pretty well done, it had a warm, brandied juices, not really imaginative but well executed and comforting.

We wound up both having the same main dish, which is pictures at the top of the post. It was a roasted cod served with a carrot and cardamom bouillon. Generally, given that cod is a very oily fish, it's difficult to go wrong, but I felt this one was plump and I particulary liked that they had grilled a crusty almost breadcrumbed exterior onto the fish.

M told me that this was from the cod having been floured before it was seared. The carrot and cardomon sauce was unexpected and gave the dish a sweet and lasting finish. It was very good, the biggest compliment I always pay a dish is that it had me thinking about how to create its taste and that's exactly what I was thinking of when I finished the main. 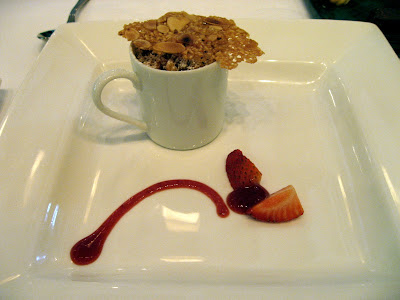 For dessert, we had the apple coupe with crunchy almond tuile and the dark chocolate cake with raspberry coulis. Neither were speaking volumes to us but the apple coupe was definitely the more unique and far more enjoyable, it was a deconstructed apple pie in a cup the bottom was lined with cooked down apple chunks, then topped with a chilled vanilla custard, followed by a sprinkling of sugar cookie crumbs. The different textures and cold temperature made the dessert easy to eat and not too heavy.

The good thing about the set meal is that it includes petit fours and tea/coffee. We were pretty full, or at least, I was from the foie gras. I was happy that the food was of a high quality and each dish had been paid careful attention, even though it was the set meal, I didn't feel like there was anything production-line-ish or lacksadaical, rather it was practiced and a deft touch with the combinations of flavours. I definitely look forward to going back and for a special meal, I'd consider the dinner degustation!