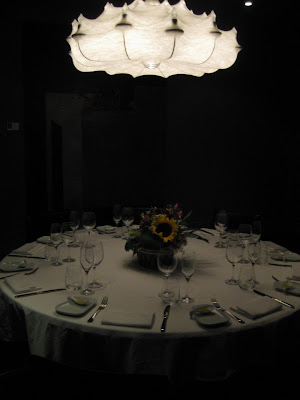 Despite the bloggers best attempts..ok, and maybe my slightly less than enthusiastic attempt, Le Papillon has closed down. In it's place, is a sexy new restaurant called Otto.

It is helmed by executive chef Giacomo Gallina (whom some may know from his time at Bice, Goodwood Park), who came over from Dolce & Gabbana's Milan restaurant and the maitre'd is his daughter.

The place has had an overhaul, it's gone from light and refreshingly watermelony grey, to dark and sensual shapes. The staff has also undergone a revolution, when I walked in, I noticed the same guy who'd been at Bonta before.

My parents had raved about their dinner there, which had consisted of a fantastic shoulder of lamb and grilled fish fresh from the chef's home visit to Italy. My mother even went so far as to say that she never really enjoyed western fish as much as asian preparations but this was so very good. 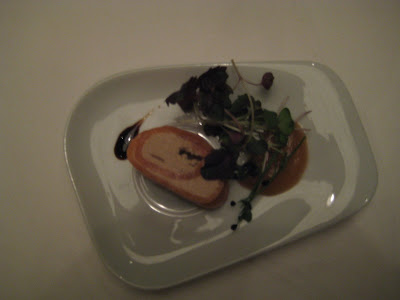 So it was with high hopes that we returned there to eat. There was just one small catch, at their initial dinner, the host had left it to the chef to prepare the meal, omakase, as it were. So, we decided to do the same. Can you guess what happened?

Well, I had looked at the menu prices in the main dining room before stepping into the private room that they accorded us. The prices for the quadrotti ($28++), premium cod fish ($40++), signature ossobuco ($44++) were somewhat on the high side, but it didn't look that bad (for example, many Club Street restaurants have those prices and higher, too) nor that dinner should run over say, $100 a head without wine. The lighting was a bit dim (no better in the private room and that's why I'm afraid the pictures don't look very good) and they had shut off the larger private function rooms which are still being done up. 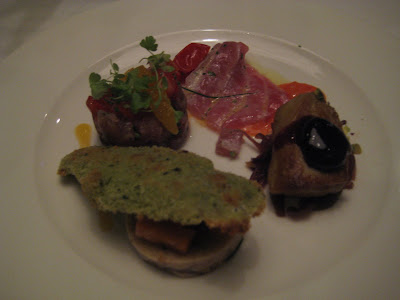 Our dinner, however, came up to a staggering figure. (Suffice to say it was way more than any wedding dinner price) For not very much food either, since we halted the meal in the third course and the plates were fairly small. The water bill, was also fairly eyebrow-raising. I'm not sure, now that I know how much it cost, that I would go back again, especially because I found the food, not bad by any means, but prone to the oilyness and heaviness of Italian food that I'm not such a fan of.

The first course, was an amuse bouche, a salmon cream wrapped in a smoked salmon fillet. It was good and refreshing, thought over quite quickly.

The second was a plate of appetizers, there was a thick sashimi of tuna, a piece of foie gras with a large brandied cherry and breaded something or other. The breaded thing really did taste of something-or-other but the tuna was thick and good and the foie grase was decent. Though can I just say that the Italians should leave the foie gras and the creme brulee to the French, who just have a different standard. 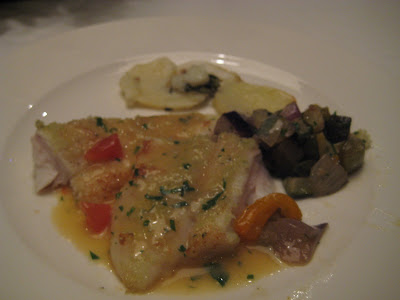 The main course was two grilled Italian fish, they looked like turbot and they were crispy and well done. However, when finally distributed on our plates, it'd become a little too cold and heavy for my liking. I think this had more to do with the service than the cooking though. 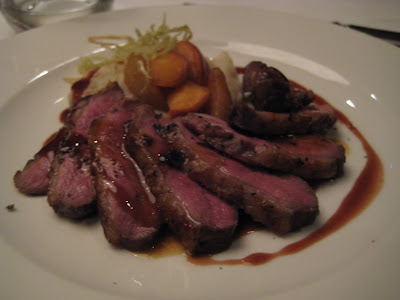 Only my godbrother had room for another main, which was meant to be a roast shoulder of lamb, but when it came out, what he got was a plated breast of duck. This was a bit chewy but had a wonderful, deep orange taste. 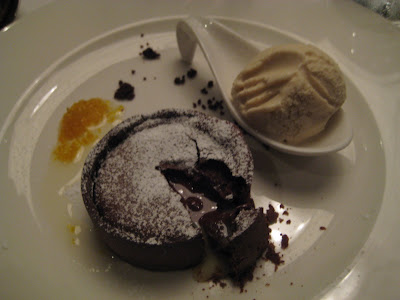 The last dish which we all had was a chocolate tart. This was very well executed, a moulded chocolate round that bled warm chocolate and white chocolate when cut. It was a good riff on the popular valronha molton chocolate cake and well combined with a coulis of liquid orange peel fluff which sharply off-set the dense richness of the cake.

Everyone had a good time and the food definitely was beyond good standard. The chef has a flair which perhaps might be better served by the regular menu choices, which I will stick to the next time I come here! To give the place the benefit of doubt, I don't think my experience, having allowed the chef a free hand, is that reflective of its true standards, it's probably just that, after having been saddled with such a clearly-knife-sharpened bill, it rather leaves a bitter taste in one's mouth! Or perhaps I just have bad karma with this location....