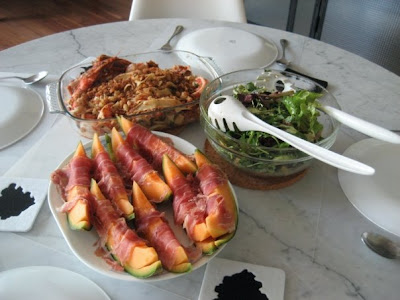 It's been a year since we embarked on the journey of pho for M's birthday. How amazing is that?

This year, we decided to go with a distinctly more Western menu! L. brought parma and melon, I tossed together a salad and D. and I started on our tiger prawn papardelle. I bought a kilo of fresh, large prawns at the wet market in the morning. I'd been eyeing these for a couple weeks and waited to have a worthy celebration. 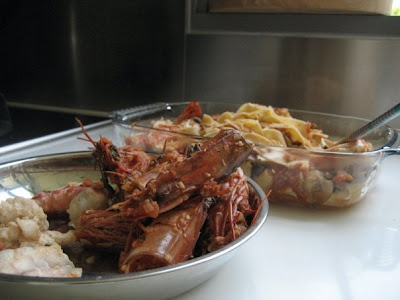 They are even more expensive than crayfish, though granted, much of the weight in crayfish is from the shell which can't be eaten. You need to pull off the prawn heads (and the whiskers) and shell and de-filibrate the prawns to begin with. Out of perhaps eight prawns, there was one gunky one that hadn't gone to the bathroom before being fished. 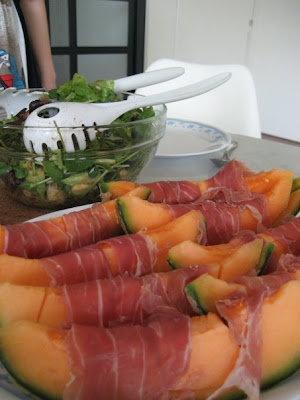 While D. dried and ladled the pasta into a serving dish, I placed the prawns on the top of the shells, letting them steam into pinkness. I prefer doing this to submerging the whole prawn so that your seafood stays firm, rather then getting soggy. Remove the prawns, lay them on the pasta and add three tablespoons of regular pasta sauce to the mixture in the pan.

We cheated a little by using regular pasta sauce. You can do it the hard way and add tomato paste and more herbs and another round of tomatoes and it will cook up into a sauce. Then we poured the hot sauce over the pasta and prawns, removing the heads to a dish. I didn't think we'd need the heads but the girls fell on them like vultures, sucking out the meat that had been infused with white wine. I guess since these are large prawns, there's a lot of juice left in the heads. 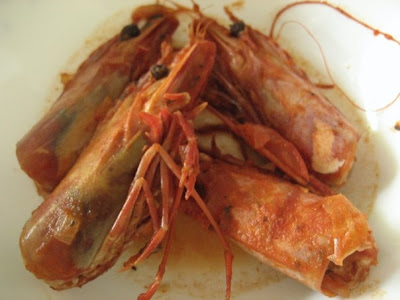 One great thing to do is actually to roughly tear up day-old ciabatta bread to make breadcrumbs and fry them in oil with thyme. Beware though, you are going to have to add quite a bit of oil and keep frying till they are hard and crisp. Then drain them and sprinkle them over the pasta for a crunchy first bite. It really enhances the texture and of course, the taste of your dish.

This is a really awesome recipe, the sweetness of the seafood tastes great with the savouriness of the tomato and sharpness of the onions, with the herbs to round it all off (and the breadcrumbs for effect and kick!). You must have really fresh seafood though but it is so worth a trip to the market. After lunch we had the cake, the presents and the dog-chasing. Lookee! 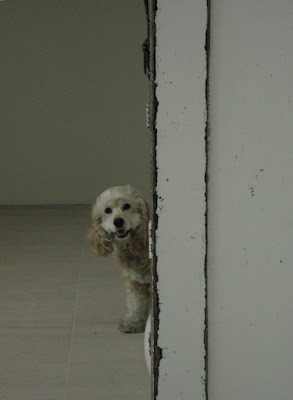