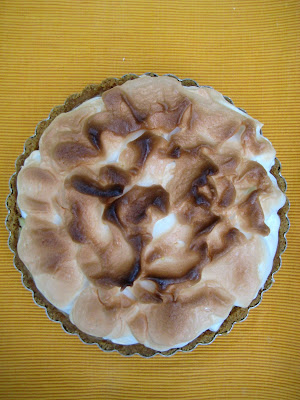 One of my favourite recipes has to be lemon curd. This stems back from college, when my 'big sister' L. used to make pots of home-made curd that was finger-licking good! She's had more of a culinary impact on my life then she'll probably ever know!

Later on, she told me she'd found a secret lemon cream recipe, that could be folded into a thick chocolate mousse, or used in cheesecake. Intrigued, I finally realized what she was talking about, Pierre Herme's Lemon Cream.

You can find my previous post about it
here or look up Dorie Greenspan's cookbook. I decided to go the whole hog this time and make a key lime pie, of sorts, with the meringue.

I was visiting my cousins in Pittsburg last year and made them an apple pie the first night for dessert and a promise to cook something everynight for dinner, upon which my cousin K. not missing a beat, solemnly said, you know... my favourite pie is key lime pie, if you're stuck for ideas tomorrow! So this is belatedly for him, I guess!

Lemon Tart
Recipe from Baking: From My Home To Yours by Dorie Greenspan
Serves 8-10

I usually use graham crackers, crushed and stired together with melted buter to form a pie tart. You can use the recipe below, which make a pate sable crust, more like a shortbread. I like the old-school feel of the graham though.

For the graham crust:

1. Crush half a roll, 200g of digestives biscuits finely with a mortar and pestle. Melt 75g butter and stir it into the crushed biscuits. If you use more butter, it is easier to form a dough, but it's a trade-off in terms of oiliness!
2. Using the back of a spoon, press the mixture into and around the edges of a tart pan and bake for 15 min at 130 degrees. When you take it out, the tart should be harder and dryer but not burnt, nor completely solid.

For the pate sable crust:

1. To make the crust, put the flour, icing sugar and salt in a food processor and pulse to combine. Add the butter and pulse until the mixture is coarse. Add the egg yolk a little at a time, pulsing after each addition and then processing in 10-second pulses once the whole egg has been added until the dough forms clumps.
2. Turn the dough onto a flat work surface and lightly knead the dough until all dry ingredients are just incorporated.
3. Butter a 22cm (9 inch) fluted removable-bottom tart pan. Press the dough into the pan evenly. Freeze for about an hour.
4. Preheat the oven to 190°C (375°F). Butter the shiny side of a piece of aluminium foil and fit it tightly against the crust. Bake for 25 minutes.
5. Carefully remove the foil, and press the dough down gently if it has puffed using the back of a spoon. Return it to the oven for another 8 minutes, or until it is beautifully golden brown. 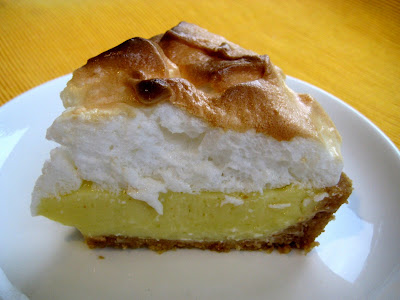 For the lemon cream, you can follow the same recipe given before or use the proportions below:

1. Simmer a little water in a saucepan. Put the sugar and lemon zest in a large heatproof bowl and let it sit over the boiling water. Make sure the boiling water doesn't go into the lemon mixture. After 10 minutes, turn off the heat, rub the mixture together with your fingers until the sugar is moist, grainy and aromatic. Whisk in the eggs and then the lemon juice. You can, by the way, use limes or those Thai lemon-limes available in supermarkets, if pure lemon is not your thing.
2. Set the bowl over the pan of water and whisk continuously until it reaches 80°C (180°F). As it gets close to temperature it will start to thicken. This can take up to 10 minutes, so be patient!
3. Remove the cream from the heat and strain it into the blender. Discard any solids. Let the cream stand at room temperature for about 10 minutes, or until it cools to 60°C (140°F)
4. Turn the blender on high, and add the butter a few pieces at a time. Scrape down the sides to incorporate the butter. Keep the machine on for 3-5 minutes once the butter is in to ensure a perfect lemon cream
5. Pour into an air-tight container and refrigerate for at least 4 hours (it will keep in the fridge for up to 4 days). When you are ready to assemble the tart, whisk the cream and spoon it into the tart shell.

This cream texture gives body to your lemon tart. There are three alterations that you might like to consider. One is that I scrape a vanilla bean into the lemon mixture, to give it a kick. It subtlely makes the taste richer and more nuanced. The second thing you can do, if using graham crust, is to put a layer of coconut cream into the tart before layering on the lemon cream. I use the packet coconut cream available in stores. It makes the tart slightly more irreverant and island-y.

The third is the addition of an egg-white meringue. Now you have the tart baked and the lemon cream set and you've assembled a beautiful lemon tart (the lemon cream is just spooned into the tart and doesn't have to be baked again). It might be gilding the lily, but you can beat 2 egg whites with a spoonful of sugar, until they are stiff and glossy. Spoon the meringue roughly onto the top of the tart, going all the way up toward the tart edges.

Pop the tart in the oven on a high shelf and grill it until the meringue starts to brown. Alternatively, you can also use a flame-thrower to give your meringue some colour. When done, the meringue should be firm and have developed a brown skin. The tart can be kept in the refrigerator for up to a week.
Posted by Weylin at 2:03 PM