Are you a chocolate person? Or a citrus person?

I am definitely a citrus person, which doesn't mean I don't like chocolate, it just means that I appreciate tastes wrought from lemon, lime and orange more, especially if its well done. I'm particularly a huge fan of lemon tarts and my 'big sister' in college used to make these pots of lemon curd that I could just sit there and scoop out of. 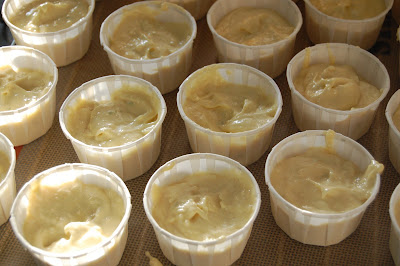 One recipe in the Dorie Greenspan book that I really enjoyed making and that you should defintely try out, is that for lemon cream. This was a recipe which she says came from Pierre Herme and it is truly unlike any lemon curd or cream recipe that I have found.

I think the key difference is really that unlike regular lemon curd that is made by mixing the lemon rind, lemon juice, with egg, sugar, then butter, this one doesn't add the butter till right at the end, when the lemon mixture is almost cool. The butter is added, slightly soft, in the blender, such that the mixture emulsifies, forming a thick cream, rather than a softer, clearer curd.

Start whisking as soon as the mixture feels tepid. It will cook till fairly thick. Keep whisking to stop the eggs from scrambling. The bubbles will get bigger, and then, as it gets closer to 180 degrees F, it will start to thicken and the whisk will leave tracks. As soon as it reaches 180 degrees F, remove the cream from the heat and strain it into the container of the blender and discard the zest.

Turn the blender to high (or turn on the processor) and, with the machine going, add the butter about 5 pieces at a time. Scrape down the sides of the container as needed as you incorporate the butter. Once the butter is in, keep the machine going—to get the perfect light, airy texture of lemon-cream dreams, you must continue to blend the cream for another 3 minutes. I actually kept the machine going till the cream thickened up into a spreadable consistency but you can also leave it to harden in the fridge. I'm a huge fan of lemon curd and I actually like this cream slightly softer and peakier, but there's something about the full thick cream version that is ultimately luxurious. Not to mention tangy but smooth and luscious. 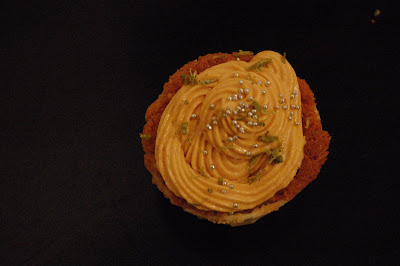 I made lime cream and also lemon cream. As the perfect counterpart, I would suggest making macadamia nut cupcakes, from the recipe that Aun posted here. The recipe is awesome, the macadamia mixed into the cake makes it moist and crumbly and when perfectly baked, it resembles sugee cake, it's flaky and melts into your mouth. 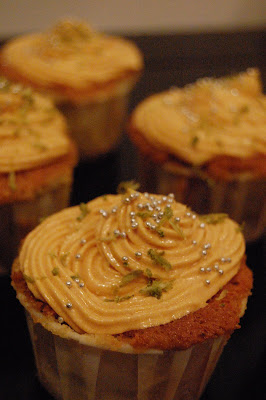 Instead of a lime syrup, I mixed up a batch of swiss merange buttercream and then mixed in healthy gobs of the lime cream, which makes it taste awesome, though slightly softer for piping. The whole combination was super yummy, definitely a keeper.
Posted by Weylin at 9:47 AM