At the end of the night, I decided that Flogger Dinners are most enjoyable. Not because, as some of the esteemed online food critics in Singapore have said, you can eat and snap and eat and snap (and talk, of course) to your hearts content but rather because some of them are so gosh darn discerning and educated about what they do, that they inform your own understanding of what you are eating.

Take for example, Ivan's pictures, taken on two point and shoot cameras (one for brighter light, one for dark). I saw food details in his pictures that I didn't even see in real life. I saw vegetables in the mince, I re-tasted sprinkles of herbs on the fish, feta in the sauce, poked a gelatanous skin on the soup. 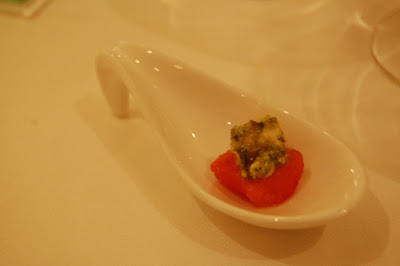 But now, on to the main event. We started the meal with an amuse bouche, his signature, of watermelon topped with herb butter and feta, a great combination of savoury and cold, sweet flavours. 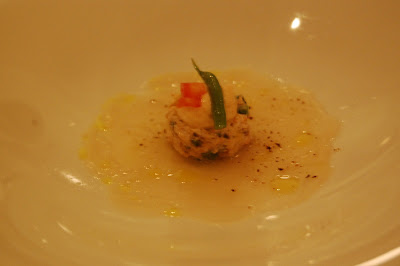 Then, a cold appetizer of Hokkaido Scallop Carpaccio and Barracuda Fish Mousse with Miso Cream. The carpaccio tasted distinctly of scallop, though nothing really suggested Hokkaido scallop and the fish mousse was overwhelmingly salty with the miso cream. I would have prefered even a unexpected taste like say, green apple cream, just to really put it out there. 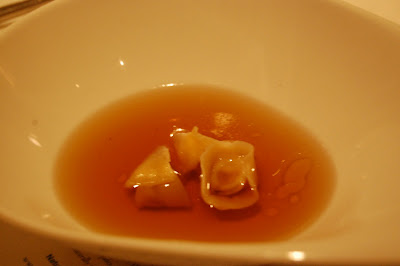 The second course, the soup, was a jasmine tea perfumed duck consomme made with Fiji Water and Foie Gras Tortellini. (The Fiji water came from our kind sponsors) This is a tiring dish to accomplish but one that should pack a punch. It was definitely delicately conceived and presented, with the tortellini rather like golden tadpoles in a clear mud pond. To do it justice, I even ate carefully and then looked up to see Sook and the same dissatisfaction mirrored in her eyes. "I don't know" she started apologetically, "there's something missing?" Yup, I agreed. What was missing was the depth. The powerful, heady taste impression of a full mouthful of foie gras which leaves you in gasping exonerated state. Balanced by the cleanest, cleaner than clean taste of duck consomme. It didn't have that kick. If you don't know what I'm talking about, go eat at Les Amis. 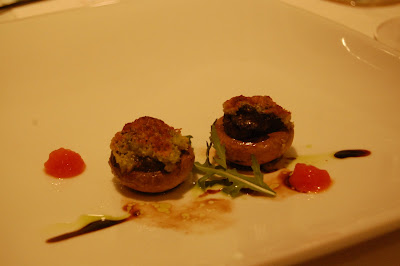 The third hot appetizer was Escargot with Herb Garlic Butter Crust on Button Mushroom Gratinee with Parsley Oil and Argula Salad. This was an example of a wrongly sized plate, a huge flat dish, with two button mushrooms, with escargot sitting atop them. It was savoury and slightly ridiculous, given the marooned leftover strands of argula but other than being oddly conceived, it was pretty good. 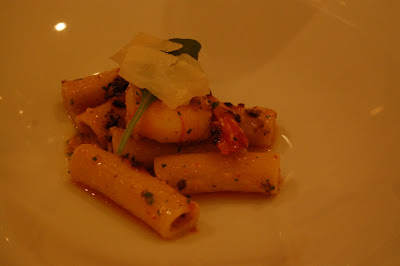 The Rigatoni Pasta Tossed in Crustacean Oil, Tiger Prawn, Shaved Bottarga and Parmesan Cheese was what I had been looking forward to but unfortunately my portion had a indiscriminate amount of oil which had set in a slightly solid spreadable way beneath the pasta, which was already cold. Somewhere between the disappointingly black pungent bits of bottarga that tasted like haybee, the shrunken tiger prawns and the chunkier than anticipated garlic, I salvaged the rest of the dish on my plate and ate that. It wasn't bad but it wouldn't be something I'd order again because it was so good. 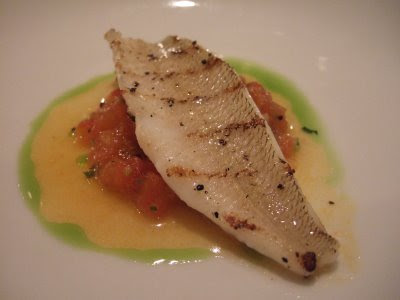 The Fish was a Char-Grilled King George Whiting Fillet with Toasted Mustard Seeds and Saffron-Tomato Sauce. This dish was the most unanimously disliked and it was probably because, as Ivan rightly commented, one couldn't taste the fish because it didn't taste fresh. I think the problem is that if you start with a thin sliver of fish, its difficult to keep a smooth and fat texture in the cooking process. The tomato sauce was a bit astringent and I couldn't taste the saffron. I also don't understand why you would attempt to also serve fish, when you don't have to. It's a difficult dish to dove-tail into preparation because timing is essential, so why do it at all, if it's not going to be the star? 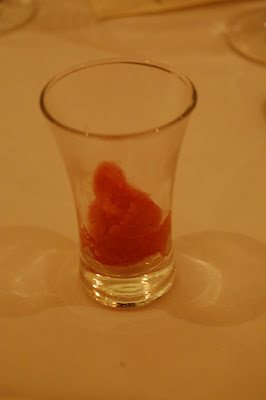 The intermezzo sorbet was blood orange, except they ran out toward the end of the table and everyone else got a raspberry swirl ice cream which Leslie grumbled over as "Walls" (Food bloggers are an unforgiving lot, this is why you never deny them). By this time, we were definitely getting testy and impatient for prizes and free gifts and the drive home to think about what we had eaten, but we had two more courses to go. 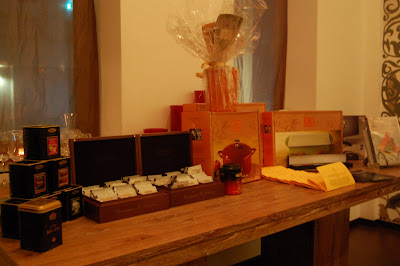 While waiting then, I might take a moment then, to talk about service. The same gripe as everytime I've been to Le Papillion. The waitstaff wait, like they've never waited a table in their life. They are possibly, worse than foodbloggers at waiting tables. There were 6 of them, for 30 of us (plus a couple walk-in tables) and they bumped into each other, dropped items, cleared plates that didn't need clearing, didn't clear plates that need to be, hovered around smiling gratutiously, constantly poured water like it was turning to wine and generally became and looked more and more agitated as the night went by. It was awful. 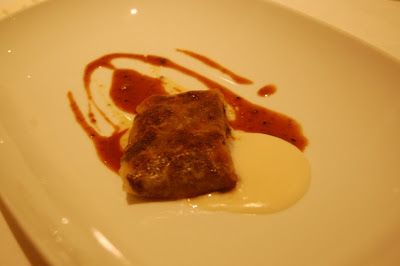 The main was a Slow-Cooked Oxtail in Feuille de Brik Parcel with Truffle Butter and Jus Gras. This was fantastic. It had great depth and fullness of beef flavour, slow cooking and dribbling meat juices. It was yummy and yes, slightly oily when pressed with a fork but hey, who's counting calories. We all enjoyed it immensely. For dessert, we had a Passion Fruit Symphony of a souffle, a creme brulee and a macaroon. People disagreed over which they liked best, some liked the creme brulee, which was soft and supple but too sharp for my taste and with a crust of not-quite- browned-through sugar. Personally I liked the souffle, which was a delightful yet subtle cloud of passionfruit flavour. It was like biting into densely spun floss and I don't even like passionfruit normally. I would definitely order this again. No real impact from the macaroon though, which was more like a sponge passionfruit layered cake bit, sandwiched rather pointlessly between two halves of a small macaron. Props should be given to the specialised dessert chef, dessert was good. 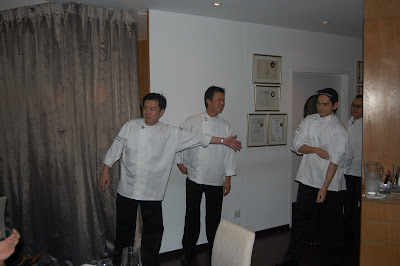 Let's be absolutely honest. I want to like and I do really like Anderson Ho and Le Papillion. I believe it deserves a chance, more than the snowflake's chance in hell that it's getting now, with the half empty Red Dot building, half empty parking spaces and half empty restaurant (on a Friday night). But I also didn't absolutely believe in the meal that we had.

Do I have exacting, demanding standards? Yes. Was I expecting a lot out of an already extensive menu and an overstretched kitchen? Sure. But I have had, even in Singapore, mind blowing, mind bending examples of simple cuisine, fresh food and startling creativity. This experience was instead... slightly frustrating.

Let me clarify that there was nothing wrong with the meal on first sight, maybe even for some people on second sight, but for me, it was frustrating because the joy and deliberation that I know Anderson has for food, did not really speak for itself in the food. Some of it was too cold, some too salty, some just not clean enough a taste. It added up to less than a consistent and confident expression of deftness and style. 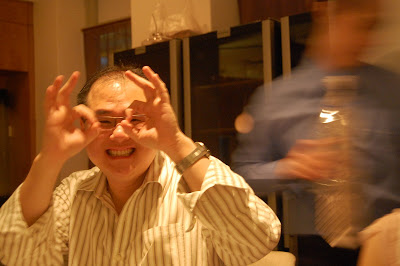 It was the company that made the dinner but isn't that the case for all the best dinners? Anderson Ho is not gifted with the easy-going charm of publicity chefs. He has an itchy, diffident ackwardness toward the smooth, social contract between restauranteur and patron, chef and audience. But he is a dearly talented chef, an enthusiastic, earnest connoiseur and a genuine friend who actually reads and remembers each blogger. Go visit his restaurant, on a day without a hitch, I think you'd enjoy the experience.