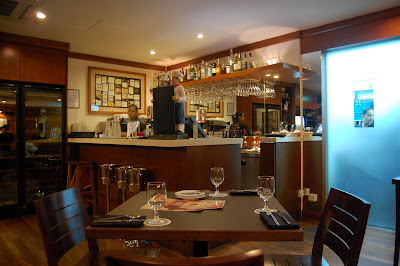 For Colin's birthday this year, we decided to have a casual family dinner at the Bistro Au Petit Salut in Holland Village. Since the move of Au Petit Salut to its new swanky location in Dempsey, the old original Au Petit Salut has been re-made into a more bistro type restaurant. The old yellow walls and medium wood furniture is gone and in its place is a darker, sleeker environment. 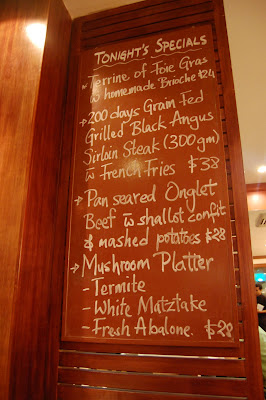 I liked it a lot, the look is a lot cleaner and there are a lot more choices for food, which wasn't the case before. Part of this is because Patrick has moved over to Dempsey and Jason is at the helm of the kitchen, allowing each to focus even more on their menu and ingredients. The night that we were there, there were a whole bunch of specials which I really appreciated as my chief complaint about Au Petit Salut before was that the menu choices were stale and rather unimaginative. 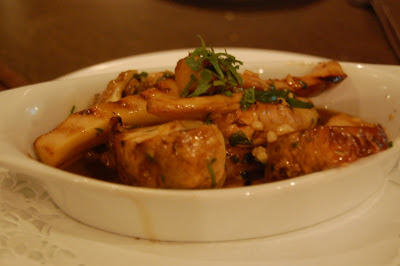 We ordered a mushroom dish, with termite, white matztake and fresh abalone mushrooms. It was really savory and yummy. And relatively healthy! That matters a lot nowadays. 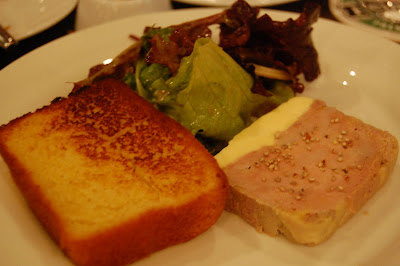 What I had to have though, once it was pointed out, was the extremely unhealthy cold foie gras terrine. Rich and smooth, it came in a generous slice and was fantastic. Luxurious. 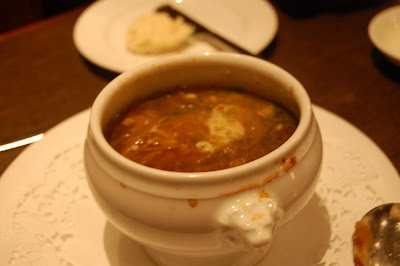 The nice thing about the bistro is that the old favourites are still there and still well done, like their French onion soup. 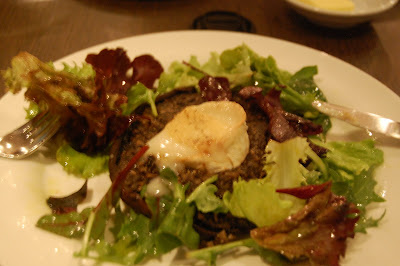 Colin had a portobello mushroom with goat's cheese, which was also very good. The appetizers set a good tone for dinner, they were all of high standard, the produce was fresh (maybe they've benefitted from joint purchase with Au Petit Salut Dempsey) and they came to the table piping hot. A plus! 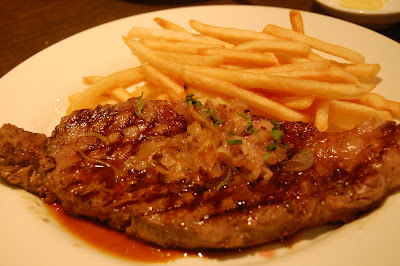 My mom and I shared a 200 day grain-fed Black Angus Sirloin Steak which was lovely, very juicy and tender. As I get older, I find that I really shouldn't be eating whole steaks anymore (except of course, when you can't help it or when your stomach just says so). She was confused though, as to how grain-fed was different to aged and how come Black Angus and Sirloin were the same piece of meat. Oh Mummy..!

Colin left me to do the honours, waggling his eyebrows dramatically and muttering something under his breath about tastebuds. I keep having to remind him that despite my earlier attempts in life at raising his hopes in this regard, he is unfortunately not adopted and actually related to the rest of us in the family. 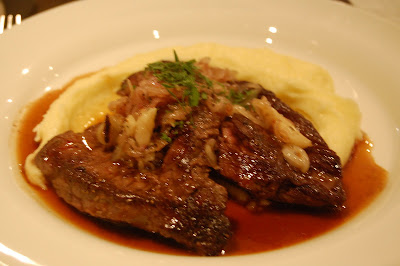 The other main was a Pan Seared Onglet Beef with Shallot Confit and Mashed Potatoes, which was also good but I prefered the Black Angus Sirloin.

The restaurant has this curious system where they have a set dinner for a certain price (I believe it was $48) and then you can also swop in a starter, main and dessert from the specials, for the price of $48 plus whatever the excess price of the particular special is. Does that make sense? It didn't make that much sense to us, there was the added complication of all starters are $10, all mains $30 and all desserts $8 or something like that.

Anyway, if you order all three, your bill saves you a small sum of $2 or something and the point I was trying to make was not that I understand the pricing mechanism (I clearly don't), just that the prices aren't as high as Au Petit Salut at Dempsey, they are relatively attractive and the best thing is the staff are trying harder than they have for a long time. It was endearing and commendable effort on the part of the chef especially and definitely deserves your support.

I was going to say that the service of some of the wait staff, especially those who look like they've been bought in through the immigrant channel, is lacking and they need better training (note to Alice) but Colin remonstrated "Aiyah, you're so evil". Really though, you can tell when it is lacking when you are biting back requests because you know they probably won't understand you and the problem will only get worse. 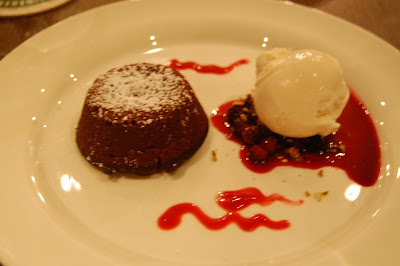 So onward to a part of the menu that actually needs work- the dessert. The fresh hot desserts have been taken off the menu, to simplify things but that really an effect of dumbing down dessert as the last course. 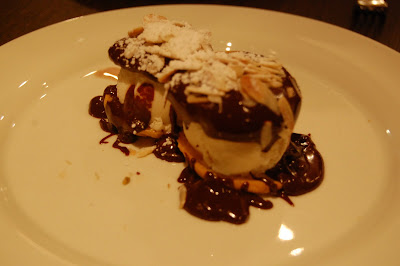 The chocolate cake was hard and the profiteroles uninspiring. In this day and age, unless they are a knock-out, one shouldn't be serving profiteroles. The ones at PS Cafe are by the way, filling, fantastic and a lot better than the ones we had here.

Go pay them a visit, the standard is improved and higher than I've ever remembered. Apart from dessert, I really enjoyed this meal and it's become one of those places you want to bring your friends to.
Posted by Weylin at 6:12 PM