What I really want to do, sometime soon, is write a post about the different places you can shop, if you are catering for or cooking a dinner. I can think of quite a few places in Singapore that I go to for both very gourmet and very local produce.

One very local place is Tekka Market, I suppose, which is in Little India, along Buffalo Road. It's no good going there, though, if you don't deeply appreciate the different cuts of meat and what you can do with them.

"Shin meat" is really too encompassing a phrase in Singapore. It's like we use shin meat for everything and anytime someone describes a particular (especially Chinese pork dish) stew or roast to you, it's like they'll say, oh, you use like, Shin Meat. Well, at Tekka, they have this meat, which is called literally...Gold Coin Meat. Yes, I can say it in Mandarin, but it's more descriptive in Cantonese and there's a little styrofoam sign indicating it in the butcher's display case anyway, so you can't miss it. 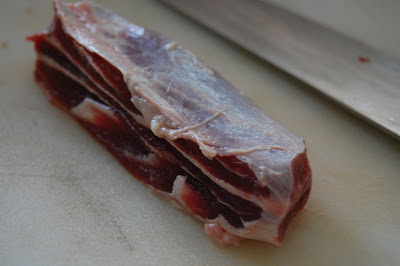 The best thing about this meat? It's $8 a kg. Which by the way, is cheaper than anything similar that you will buy at a supermarket, or even at any of the other markets. Okay, so the best thing about the meat is that it's versatile. Look at this picture. Isn't it a beaut? 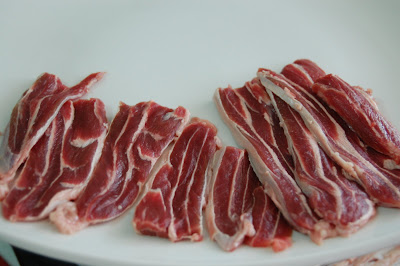 With that kind of striated fat, you can lightly roast it with a marinade, you can steam it in a soft supplness, you can do so many things (sorry, vegetarians...but eating meat is a Joy!) 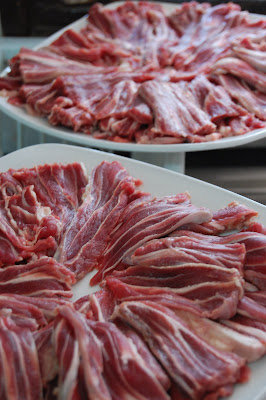 I did two things with this meat. I sliced it length-wise up for dipping quickly into the broth and eating with the pho. And I made...I don't know the English name for it, Ngau Gan. Which is Cantonese for beef that has been flash boiled for 5 seconds, then slowly steamed with vinegar, dark soy sauce, cinnamon, star anise and rock sugar, till it becomes soft, spicy flavourful and melt-in-your-mouth tender. 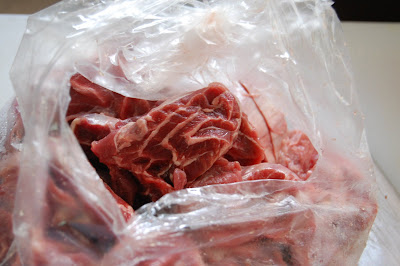 To do so, you basically cut the meat cross-wise and this is what you get. Then you flash boil them for alright, not 5 seconds, but literally 2 minutes, just until they start to turn from red to pink and light grey. Don't they look like brains? 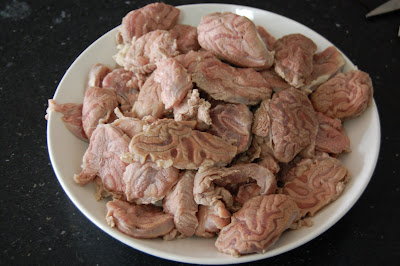 Then you add all the ingredients, soak the beef in the sauce and place it gently in the steamer over as small a flame as possible. Then steam for three hours. Yes, three hours. The more you steam, after a certain point, if the process has been slow enough, the softer and darker the meat gets. You can do this the day before, refrigerate the meat overnight, to let the taste slowly permeate through the meat and then put it back on a steamer to finish the job the next day. It was fantastic eating. 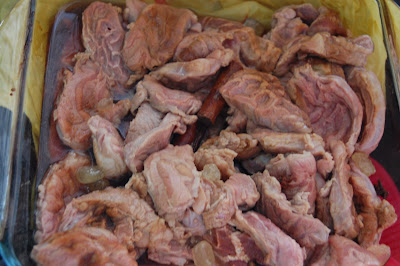