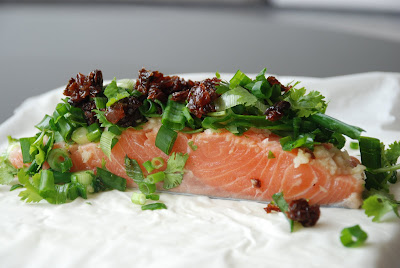 4 Salmon fillets (cut into fat strips, one for each guest)
Three cloves of garlic, chopped
A large root of ginger, grated
3 limes
Three bunches of spring onions, including the white stems
A fistful of cilantro
350g of raisins/sultanas/cranberries
Thai sweet chilli sauce
Frozen filo pastry, thawed (two sheets for each parcel so in this case, 16 sheets)

This dish is something I've been stuck on for awhile and everyone who's tried it has been struck by the unique flavours and juicy texture. It's the simplest thing in the world to make and an easy dish to prepare fully before-hand when you have large parties.

Buy some salmon fillets, prefably without bones and have it de-scaled, cleaned and seasoned with salt and pepper. Marinate the salmon for awhile with grated ginger, garlic and lime. It's up to you how much you want to use, for me, I prefer that the ginger and especially garlic are not overpowering but I like to have more lime. I had 8 people for dinner, so I used 4 fillets and sliced each into two fat strips. 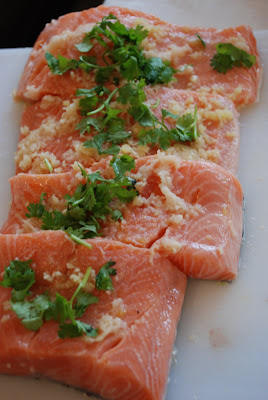 The amount of spring onions, cilantro and raisins is also variable, I like to use a more generous amount. Chop up a handful of spring onions, cilantro and raisins. Yes, chop the raisins, so that they are raisin pieces, rather then whole raisins. Normal black grape raisins will do, but I've tried this dish with cranberries and sultanas and it only improves.

Seperate two sheets of filo pastry and butter in between them. Place a stripe of salmon on top, just right of the center and heap the spring onions and cilantro on it. Follow with the raisins. Then, wrap the fish like you would a present, folding the short (right) side over and the two edges on the top and bottom, then rolling the package toward the far end of the pastry sheets.

These packages can be neatly laid and stacked in a baking tray for up to two days, refrigerated. When your guests arrive, simply pop the whole tray into the oven and bake for 20 minutes at 140-150C degrees. It is almost impossible to overbake salmon but you want it to be crisp on the outside and slightly undercooked, juicy-bright and soft on the inside. 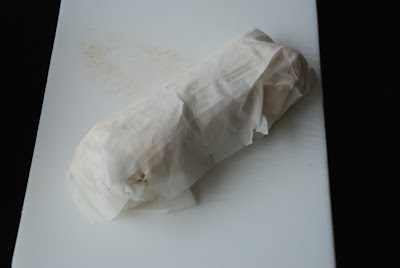 The pastry will form a crackly crust to the parcels and the vegetables release juice upon cooking, which is then soaked up by the raisins, which will get all fat and slightly sticky. (In case you're wondering, you chopped the raisins to break the tough skin that would otherwise prevent the vegetable juices from being soaked up easily).

Mix a few tablespoons of Thai sweet chilli with a tablespoon of water or lime juice and drizzle it over the fish parcels. The combination of the raisins, cilantro, salmon and sweet chilli gives a good kick which really makes the taste of this dish outstanding and memorable.
Posted by Weylin at 5:05 PM