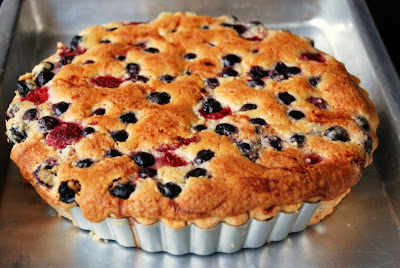 I have a strange quirk, I don't like raw almonds much and I dislike almond essence (and hence almond jelly) immensely. However, I quite like almonds pieces when they are baked into biscuits or a cake.

This recipe uses up the second half of the pate sucre dough but the filling, instead of a lemon curd or pastry cream, is a almond filling which bakes into a solid pie. I had my doubts about this recipe because from the pictures (It's terrible how these are misleading sometimes isn't it!) it looked like the almond cream was very thick and I was afraid it would produce a semi-solid yet heavy dense pudding like almond-y filling.

Instead, my conclusion was that this recipe is actually very briliant and it tastes, like a mouthful of comforting home food. It was warm and berry-full, juicy and yes, slightly dense but wonderful nonetheless. All the guests enjoyed this immensely and I would definitely make this again.

The only warning though, is that of course, I gilded the lily and tipped in heaps more blueberries than I should have (but worth it, look at those dimples!) and as such, the baking time was a lot longer than suggested here. It might be different for you but I think the pie would take much longer to brown than the recipe states, even with fewer berries.

This sweet pastry dough is like a delicate butter cookie rather than a traditional flaky pie dough. The almond cream is said to have been created by French pastry chefs in honor of the 16th century Italian nobleman Marquis Muzio Frangipani, who invented a technique to infuse gloves with the perfume of bitter almonds. You can also use apricots, cherries or poached pears in this recipe.

1. Sift together the confectioners' sugar, flour, and salt into a bowl.
2. Add butter in a food processor and process until smooth, about 15 seconds. Scatter the flour mixture over the butter, add the egg, and process just unitl the dough forms a mass; do not over mix. Turn the dough out onto the counter and divide it in two. Shape each half into a disc, wrap in plastic wrap, and refrigerate for at least 2 hours or up to 1 day. (Freeze half of the dough, well wrapped, for up to 1 month.)
3. Dust a work surface lightly with flour. Dust the dough lightly with flour and, using a floured rolling pin, roll it out into a rough 12 inch circle. Lift the dough often, make sure that the dough does not stick to the work surface; dust the work surface lightly with flour as needed.
4. Transfer the dough to a 10-inch removable bottom tart pan by rolling the dough up onto a rolling pin into the pan and unroll the dough over the tart pan. Gently press the dough into the pan, especially where the bottom and the side of the pan meet and up sides. Remove any excess dough. Prick the bottom of the tart shells all over with a fork. Chill the tart shell for 20 minutes.

1. Place butter, sugar, and almond in a mixing bowl and beat with an electric mixer on medium speed until light and fluffy, about 5 minutes. Scrape down the side of the bowl with a rubber spatula. Add the egg and mix until it is light and creamy, about 3 minutes. Add the all-purpose flour and beat on low speed until it is incorporated, about 30 seconds. Do not overmix. (Place the almond cream into an airtight container and store in the refrigerator for up to five days or freeze up to one month.) 2. Preheat oven to 350°F. Bake chilled crust until just set; the tart shell should have little or no color, about 18 minutes. Cool crust on rack for 15 minutes. 3. Spread filling evenly in crust. Arrange raspberries, atop filling, fitting in as many as you like. Sprinkle with sliced almonds. Bake tart until filling is golden brown and set, about 35 minutes. Cool tart completely on rack.