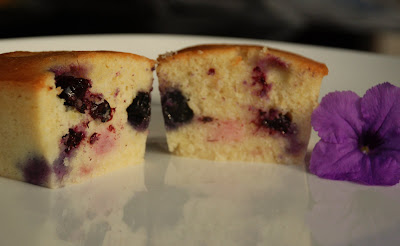 The exciting part of this weekend is that I received a lovely gift of some punnets of blackberries, raspberries and blueberries. It's like the last hurrah of summer before the world sets into winter. I immediately went into berry baking overdrive.

The first recipe, which sounded really pretty, was raspberry friands. The "Friand" is a small, moist cake made with almond meal and flour. It is of French origin and may be related to the Parisian "financier" cake and the ubiquitous madelaines. It is most common in France, of course, but also now in Australia.

The friand is supposed to be quite a small cake, if you've ever seen these trays with little depression-moulds, they are usually in the shape of shells (madelaines), or rectangles (friands). Other little french tins that can be used also have cute names like Dariole or Barquette moulds.

Unfortunately, I don't have any of these trays and I used small loaf tins. You should use the trays though, the reason is that this recipe, which uses quite a bit of whipped stiff egg white, produces a little cake that is very soft and spongy on the inside and crusty on the exterior. So you need the cake to be small to have a good bite, since the inside is so steamy.

I was also a little trigger happy with the berries. In the recipe, it says to push in two raspberries into the thick batter of each friand. Of course, I tipped in a cup of berries and as a result, the interior of the cake was even softer and fruity then I had planned. Still, fresh out of the hot oven, it was still lovely. 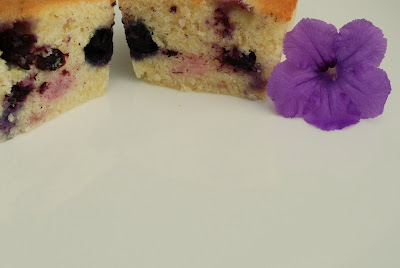 1. Preheat oven to 180°C.
2. Prepare a friand tin or 6 individual dariole molds by lightly brushing them with butter.
3. Melt butter in a saucepan over low heat until golden in color. Set side to cool.
4. Place almond meal, icing sugar, flour and baking powder in a bowl and stir to combine.
5. In a separate bowl, whisk egg whites until foamy. Add the egg whites to the flour mixture and stir to combine.
6. Then add the cooled butter and stir until thoroughly blended.
7. Spoon the mixture into the tin/moulds, dropping some berries halfway through. Fill the tins/molds 1.5cm from the top. Place a berry on top.
8. Bake for 20-25 minutes, until tops are golden brown and springy to touch.
9. Cool for 10 minutes and unmold the friands by tapping the bases lightly a couple of times until they are released. Dust with icing sugar.
Posted by Weylin at 11:15 PM