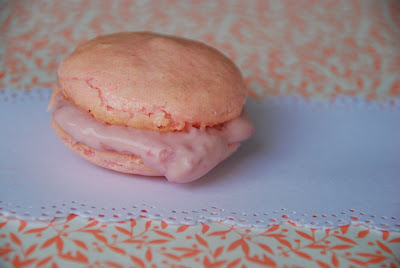 My original thought, upon contemplating the berries, is that I wanted to make a white chocolate raspberry ganache. So I did. It was really rich and yet berry light and what I really wanted it for, was to sandwich between macarons.

I don't know why I suddenly had the craving to make macarons. It's really quite a torture as it's a delicate, exacting process that has little to recommend it, except an incredibly self-righteous high when you get it right.

It involves aging egg whites for a day to dry them out, then whipping the egg whites till stiff and doing the macronage process, which is folding in a mix of almond and icing sugar, which has to be ground till really fine. This process of folding is ridiculously instinctive, one fold too few and the mixture doesn't actually blend, one fold too many and your mixture has become too liquid and too thin. When you pipe out the macarons, they spread, crack and don't develope the beautiful smooth domes and frothy "feet" at the base.

This is a recipe for masochists but little beats the taste of a freshly made macaron, it is as rich as it is ephemeral. It's the encapsulation of awe and greed, just as this recipe can sometimes be the encapsulation of kitchen weirdness and madness. I have some friends who are masters of this and maybe you can be too.

The recipe has three steps, making the macaron shells is the hardest. When you've mastered the technique, you can change the taste and make chocolate, peanut, green tea, for example. Making the filling is easy and you're only limited by the scope of your imagination (you can make chocolate ganaches, berry fruit, mango, green tea, chestnut, ginger, salted caramel).

The third part is sandwiching the shells and the piped in filling- the perfect macaron is a compact size of about a 1.3 inches in diameter, with high shells and a five layer sandwich created by the split between the smooth shells and crumbly feet of each macaron.

The filling layer should be solid and thick, with a great flavour and maybe even a hidden block of chocolate or crystallized ginger in the center. The shell should be dry to the touch but shatter upon a bite into it's inherant crumbly texture. Unfortunately, my ganache hadn't been frozen long enough and so was a bit liquid, instead of the dry, rich paste that should have been squeezed through the piping bag. 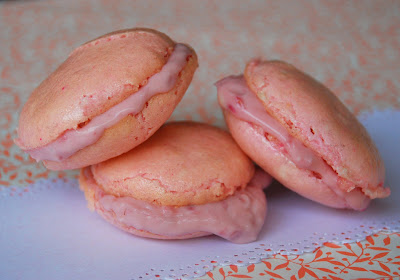 1. Grind the powdered sugar and ground almonds in a food processor till fine.
2. Whip the egg whites in an eggbeater and drizzle in the granulated sugar. Egg whites should be stiff enough for you to upturn the bowl without the egg whites falling out.
3. Mix the almond mixture into the bowl with the cocoa powder for chocolate shells, or use a drop of food colouring gel. Don't use liquid food colouring as it make the batter too soft.
4. Fold in the mixture by lifting with a spatula, along the sides of the bowl from the center, in the base. Do not over-fold, as you will cause the egg whites to collapse. You should fold about 50 strokes and it is obvious when you've overdone it because the mixture starts to lose it's stiffness and fall into a thinner viscousity. This difference in texture is easy to feel through the spatula in your hand, as the mixture will start to feel less thick.
5. It is better to under, then over-fold, as the mixture will continue to thin on the baking sheet.
6. Spoon the mixture into a piping bag and pipe out onto a silpat mat or parchment paper on a baking tray.
7. Leave the little coin-shaped macarons out for an hour to dry somemore. This creates the smooth skin of the macaron.
8. Preheat the oven to 315F and bake for 8-10 minutes, depending on their size. Let cool completely.