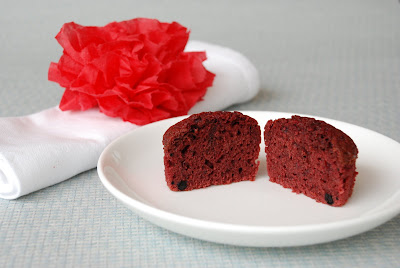 I have slowly moved to this new paradigm of not having any plans for the weekend. I'm not sure why that is, perhaps I'm stressed or perhaps I'm just getting old. It's not fair to say nothing though, of course, I have wonderful meals with friends, check out some new places when I'm able, dress up dress down, hang around, in all too Singaporean-a-fashion. Time to take a long trip to the US, I think, this little residential town is getting too small!

As a sure sign that I was starting to feel restless, I dug up some old macaron recipes that I'd been meaning to try. Some New York Times recipes and some oldie but goodie festive recipes (to come soon!). One of them, was Red Velvet Cake, a hot sexy coloured cupcake made popular by Magnolia Bakery in New York. This is an old school American-as-pie product, which people get nostalgic about, the same way they get about their grandmothers.

Personally, I had always thought Red Velvet Cake was sponge cake dyed a brilliant hue of crimson. Then it occured to me that maybe it did have some flavour, like cocoa or maybe even beetroot. I'd been wanting to try to make it for some time and had to wait for the right occasion, which presented itself when a friend asked if I would make cupcakes for her daughter's birthday. I made an assortement of chocolate, orange and you got it, red velvet cake.

This is the recipe that I got from the New York Times, it's not the Magnolia Bakery recipe because all of those are cream-butter-and-sugar recipes, whereas this is a grapeseed oil-and-buttermilk recipe which I find much more moist. My cupcakes were not a fire-engine red though, so my suspicion is that you either have to be much more heavy-handed on the red food colouring then I was prepared to be (yes, it really did say 6 Tbsps and I guess I shortchanged it) or cut down the amount of cocoa and replace it say, with minced or juiced beets.

What I read later on is that a Red Velvet Cake is really a Southern Devil's Food Cake that has red food coloring added to it and is so called "because it is supposedly so rich and delicious that it must, to a moralist, be somewhat sinful." Cute! I even found a post on Colin Goh and Yen Yen's Live from New York blog about it. I used a buttercream frosting because it was for kids but if not I would advise using a traditional Cream Cheese/Whipped Cream Frosting with Fresh Coconut Shavings, the icing recipe here is from the Waldorf Astoria. I would also advise making a whole cake and frosting the layers- makes for a really dramatic contrast with the red and white colours.

Recipe by Elisa Strauss in the Confetti Cakes Cookbook:

* If I were to do this again, I would decrease the cocoa powder to just two tablespoons and add 1/2 cup of pureed beets.

1. Preheat oven to 350 degrees. Place teaspoon of butter in each of 3 round 9-inch layer cake pans and place pans in oven for a few minutes until butter melts. Remove pans from oven, brush interior bottom and sides of each with butter and line bottoms with parchment.

2. Whisk cake flour, cocoa and salt in a bowl.

3. Place oil and sugar in bowl of an electric mixer and beat at medium speed until well-blended. Beat in eggs one at a time. With machine on low, very slowly add red food coloring. (Take care: it may splash.) Add vanilla. Add flour mixture alternately with buttermilk in two batches. Scrape down bowl and beat just long enough to combine.

4. Place baking soda in a small dish, stir in vinegar and add to batter with machine running. Beat for 10 seconds.

5. Divide batter among pans, place in oven and bake until a cake tester comes out clean, 40 to 45 minutes. Let cool in pans 20 minutes. Then remove from pans, flip layers over and peel off parchment. Cool completely before frosting.

1. Softly whip cream by hand, in electric mixer or in food processor. Cover in bowl and refrigerate.