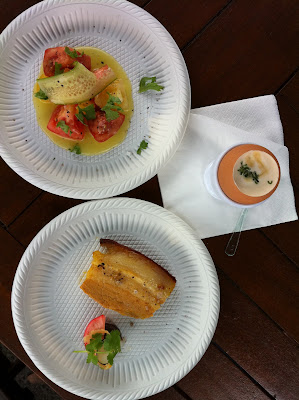 I attended the Savour fair this past weekend in Singapore, which was held at the F1 pit building. Tickets were $42 each with $21 of those dollars redeemable in Savour dollars.

The ground level of the carpark had been covered in white marquees, with the more atas (high-end) restaurants and brands setting up stalls. There were local names like Gunthers and but also foreign names like L'Apage and Pujol and each restaurant was housed in a marquee and fronted by low table counters where staff hawked a trio of dishes. There were also booths manned by food-related brands like San Pelligrino and Acqua Panna.

All the restaurants were offering tastes of their 'specialties', like L'Apage, where we purchase their cold egg and tomato
What I found disturbing was, these places were charging obscene prices for a tiny smear of food- this thin slice of pork belly for example, cost $21 dollars! And so it went, each stall was $14 for a bit of this and $19 for a piece of that, all served in disposal little cups and bowls with plastic utensils.

I know that the idea was to introduce these signature dishes and foods to people who might not have the opportunity to travel to eat at these well-known restaurants. But I would have thought that even the chefs would have found it insurmountable to charge those kind of prices for the product. The portions were far less than what you would have experienced at the restaurant itself- for example, Gunther was offering, literally, a mouthful of their cold angel hair ostrecia caviar pasta for $19 but at the resturant, a full and far heartier dish of the same doesn't cost much more.

Some of the items were so small, it was laughable, for example, people were carrying expensive sushi maki or molecular xiao long bao around in miniscule cupcake wrappers. In the end, we had to wander over to the Chinese restaurants, like Hua Ting, that were offering more substantial plates of XO carrot cake and noodles.

You also blew through the Savour dollars at a slightly ridiculous rate, the books of tickets came in $3 denominations but the lowest price of any dish or even a glass of cider cost $9 and most of the food on the ground level cost $21 so you would use up an entire book of tickets on a thin slice of pork belly or thimble of cerviche. Thankfully the rain came pelting down and we had to migrate to the grandstand area where the exhibitions and classes were being held.

These areas were lots of fun to explore. Each floor had three exhibition areas and each would hold up to 20 stalls, selling everything from organic vegetables (Zhen Xin) to soy products, cupcakes, to macarons, to bread and meats. This is where, we discovered, we should have come for lunch. Food here was much more reasonably priced, $9 for a set of sausages from The Greengrocer or a toasted panini, to $6 for a slice of Windmill Pie and $6 for a coffee from Oriole. Even then, it was somewhat artificially priced in denominations of $3 and made items more expensive than they would have been in-store. I was happy to pay the premium to be able to sample different food businesses, many of whom operate from a home kitchen or suburban location, which I would otherwise not get around to ordering from and collecting.

There were two exhibition areas devoted entirely to wine and the import of various liquors and oils. Half of a floor was also taken up by 360 Foods, which had set up a make shift supermarket area, showcasing their fresh meats, hams, cheeses, oils and sauces. The clientele was primarily well-heeled, with many groups of young, PR-looking girlies and there was even a non-alcoholic and children's play with food area set up.

In the classes, the group was slightly more professional and with a culinary background (for example, several popular classes were oversubscribed and everyone in the 40 strong crowd owned a Kitchenaid). I saw several culinary entreprenuers and many bakers that I've met over the years. We attended two classes, a bread making class and a food styling class. Both classes (since they were free, I wasn't that judgemental) were very interactive and fun to attend. The bread class provided us with samples of flour, yeast and a generously-sized ball of dough each, to roll out and knead.

One thing that I felt could be improved was probably the logistics of the fair, particularly at the classes. While there were ample service people around, they were aimlessly directing traffic and didn't seem to have much control over the situation, the rooms nor the attendees. Also, the facilities were clearly lacking; for example, during the bread class, we didn't have the opportunity to make bread from scratch, nor to, at the end, make any bread product at all. Even with the instructor's lovingly prepared dough, we were not able to roll it evenly on the filmsy plastic white tables, nor did we get a really good scientific explanation to bread making, as was done in the bread and cheese classes I attended in New York.

In the food styling class, it was a struggle to get the session going and this was not for want of effort or preparation on the part of the teachers. There was one chef and one photographer, the chef was struggling to chop vegetables on a small plastic cutting board and cook inside an enclosed, indoor space, on a thin small pan, perched on an Iwatami stove, on a white plastic table. The space was limited and the smoke from the cooking had nowhere to exhaust, forcing the cook into a harrid agitation and a slap-dash feel to the recipe. The oil splattered across the tables and the condensation from the pan, because of the tight space, wafted up onto the TV screen where the photographs were being flashed- I don't think the set up really did the classes any justice and for such a large event, the staging seemed inadequate and ill-conceived, even though the talent and substance was good.

Although I enjoyed myself and found it a good use of the $21 entrance fee, I felt that the tone of the fair was extremely commercial and there were many aspects (the steep food pricing, the food proportion from the celebrity chefs, the staging of classes and the interaction of the stalls) that could have and hopefully, will be, tremendously improved.
Posted by Weylin at 11:40 AM