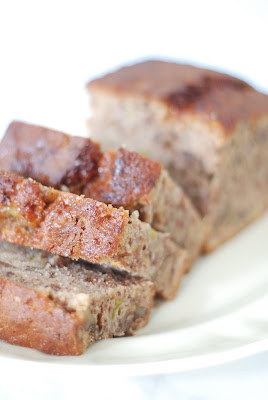 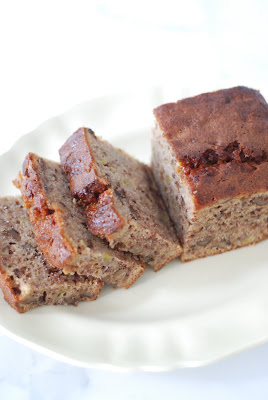 I'm somewhat of a traditionalist when it comes to banana bread, it has to have the right texture, more dense and sticky than cake, but sweeter and more cake-like than bread. I've tried all kinds of recipes and some disappointingly turned out more like cake and served better in wedges than slices. I've tried recipes with oil and with butter, with sour cream and with buttermilk (I've tried some without either but those tend to produce a very flat tasting cake-like texture), with walnuts, chocolates, cinnamon and nutmeg.

I can now truly say that I think I've found the best and my favourite banana bread recipe. Trust me, that's no small praise. Strangely, the providence of this recipe is nowhere near Australia, it comes from Chef Joanne Chang of Flour Bakery in Boston. Even more oddly, despite having quite a bit of time in Boston, I'd never heard of this bakery and was introduced to it's cookbook by a friend in Singapore who'd bought it at the Kinokuniya sale.

When I tasted the bread, I was delighted by it's rich texture and flavour. It had just the right mix of sourness and sweetness, cinnamon and nuttiness from the walnuts. It was also easy and quick to make and held it's shape well when baked, sliced and even frozen. I've since made the cake thrice and tweaked the recipe ever so slightly.

There were two very similar versions of the recipe, one from the cookbook and one via Food Network, so I used the cookbook recipe as a default. Here is the recipe, transposed with metric weights for convenience. The recipe doubles and triples easily, if you want to bake a sheet cake. I made one for my mum's qigong group which she served while warm, I was sure there would be leftovers from a 14x14 inch cake but it was all gone!

Method
1. Set the oven temperature to 350 degrees or 170 degrees C.
2. Line the bottom and sides of a 9x5 inch loaf pan, or a 6x6 inch square pan with parchment paper.
3. Sift together the flours, baking soda, cinnamon and salt
4. Beat the sugar and eggs with the whisk attachment on an egg beater until light and fluffy. Make sure the mixture is light in colour and truly thick and fluffy; it should take at least 15 minutes.
5. Drizzle in the oil; add it in a small steady stream so that it is gradually absorbed, do not add it all at once
6. Add mash bananas, sour cream and vanilla.
7. Fold in the dry ingredients and walnuts. For a better texture, try to fold in the flour rather than mixing it into the egg beater. If using the egg beater, do not overmix as the flour will work into a stiff gluten, which undermines the softness of the bread.
8. Pour into the lined tin, smooth the top and bake for about 1 hour. Check after 45 minutes. I find that it usually takes an hour for my oven, up to 1.5 hours if I double the recipe.
10. Keep warm at 100 C before serving.
Posted by Weylin at 10:14 PM

Sounds yummy! Can I find t when do you put in the sliced bananas into the mix?

that looks delicious! i love banana cake as all the banana breads i've tried in the past are dry and unexciting. but yours looks fabulous :)