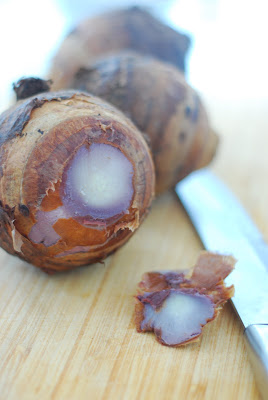 I first heard of this recipe from a friend, whose sister had copied it from the Straits Times. They were a Teochew family and as many do, they were big fans of 'Orh-nee' or steamed yam.

She was so proud of their home baking that she insisted I try some, which I did, hesistantly. One of my perculiar food dislikes is what I call mushed-bean textures. This means that a lot of Mexican foods and more inconveniently, a lot of Chinese desserts are off-limits for me. The list is quite wide, from refried black beans, to red bean, green bean, yellow bean, mung bean, 'ling yong' or yam soups or desserts. It isn't the taste that I don't like, but the mouthfeel of the starchy, pastey texture. (I love, for example, Indian yellow dhal). 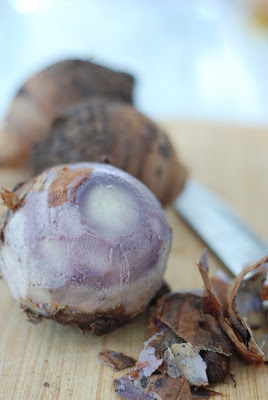 I'll tell you a secret. When I was young (for this food dislike has been a long time in the making), at the birthdays of my grandparents, I would take the birthday buns- traditionally steamed 'ling yong' or lotus seed buns encased in sweet white dough and dyed a soft pink hue to resemble peaches, a Chinese symbol for long life and, lifting the long Chinese restaurant tablecloths, surreptitiously and gently lob it under the table. I've always thought about the little pile of buns that must have built up over the years.

Having had the good fortune to have been born Cantonese, where traditional desserts tend to be clear, thin, smooth and syrupy, this was generally not a problem. Nowadays, having married a Hokkien man, the deception has become harder. His family is incapable of appreciating that anyone can systematically reject all their traditional desserts and the concept of mouthfeel hardly seems a necessary or adequate explanation. I don't think they've noticed, for example, that I never eat mooncakes. 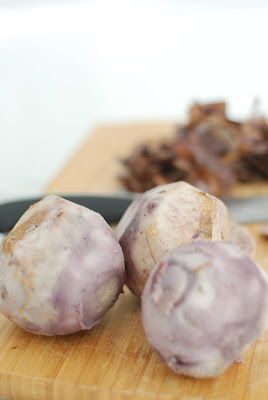 I've of course, never been a fan of yam, or taro, as they call it in the US and my idea of taro extends to about as extensively as pearl milk tea. But this orh-nee cheesecake (orh-nee is steamed yam, mixed with cream, oil and coconut milk and blended and steamed into a smooth but thick pudding) was actually not strong and it wasn't oily either. It wasn't delicate, but then, cheesecake generally isn't and it was flavourful. I dug up the recipe which was featured by Rebecca Lynne Tan (her sister was a friend of mine) and realized it was from a fellow blogger. You can find the recipe on her lovely site here. 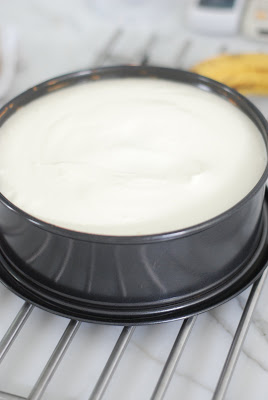 My chance finally came this past weekend, my godfather, who is Teochew and loves orh-nee, was coming to dinner and I had leftover cream cheese and sour cream in the fridge. I bought three lovely Thai yams from the market (this recipe just needs two yams but I didn't know that) and was completely seduced by their gorgeous purple colour, if yam tasted the way it looks, I would totally be a convert! A tip to the wise; only the head of the yam steams into a beautiful, deep purple softness, the butt of the yam is where you get the striated pattern and dry hardness, like taro chips.

The most tedious part was probably peeling the yams, the recipe itself was a cinch and I particularly liked that you don't have to use a water bath in this recipe. I tweaked a little bit of the recipe but not intentionally, I used less butter in the crust, omitted the purple colouring and I only belatedly realized that I had halved the amount of cream cheese. If I were to do it again, I would whip the egg white first, then fold it into the yam to lighten and fluff up the texture. I would also peel and cut the yams before instead of after steaming and steam them wrapped with a few knots of pandan leaves to highlight the fragrance. There were fourteen for dinner and this dessert intrigued everyone, even those who like me, weren't a fan of yam. It was particularly popular with the older folk who liked that it wasn't sweet and it had a lovely baked, savoury-sweet aroma. 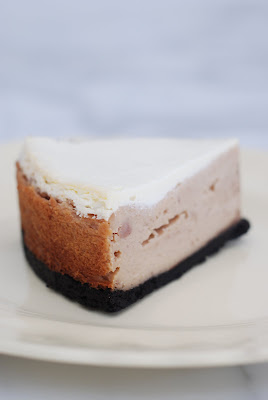 Method
1. Preheat the oven to 150C
2. Steam the yams for at least 30 minutes until soft.
3. Process the Oreos till fine, mix with the melted butter and press neatly into the base of a 9inch springform baking tin. You can also use a square tin and cut the cheesecake into slices.
4. Freeze the pan for at least 30 minutes until the base is set.
5. Puree the yam in a food processor until smooth
6. Beat the cream cheese and sugar till it is smooth and creamy, using an eggbeater. Add the eggs one at a time and add the corn flour. Beat until smooth. (This is where I would have whipped the egg whites separately and folded them into the mixture).
7. Fold in the whipping cream and add the salt. I used the processer to mix all the ingredients together, as it was just faster and more convenient. Unless you are going to beat the egg whites or whipping cream separately, it doesn't really make a difference if you process all the ingredients into a smooth batter.)
8. Pour the batter into the base and bake for 60 minutes.
9. The edge of the cheesecake should be set and the centre may still be a bit wobbly. Bake on a lower rack if the top starts to crack, this will help to keep it moist.
10. Whisk the sour cream, sugar and Kara coconut cream (santan) together and pour it over the cheesecake to form a topping.
11. Return to the oven and bake for 20 minutes. If you want a browned top, you can try grilling the surface of the sour cream topping.
12. Take the cake out of the oven but keep it in the pan till it cools completely. Chill in the fridge for at least four hours (I put mine in the freezer for two, as I was in a hurry). Unmould only when the cake is completely cooled through.
13. The recipe should serve eight slices but in today's calorie-concious society, the guests all carved really slim pieces, so there were easily sixteen slices.
Posted by Weylin at 10:37 PM