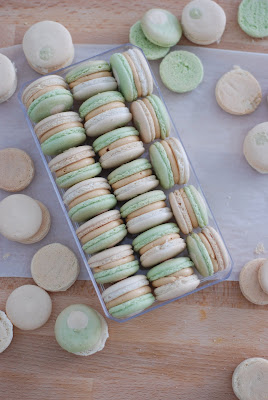 I'm not quite sure why I leapt into making PH's Frivolite macaron, which featured salted caramel and dried green apples. I already had so many things to do today! The lesson clearly, is that you must not delve into PH's delicious book unless you want to while away an afternoon! 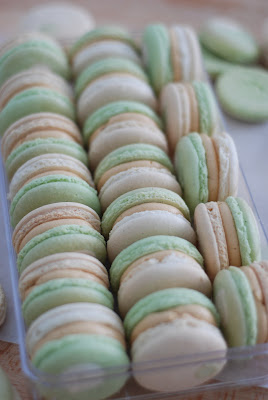 I think part of the reason is that I'm making three new PH flavours with MB on Labour Day and this was part of my plan to get excited! The other reason is I'm a new aunt (well, aunt-once-removed, since it's my cousin's new baby) and I thought I would make a classic but pretty flavour to welcome little baby girl J into the world. 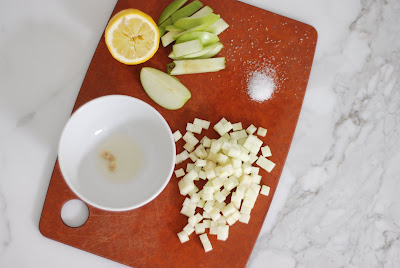 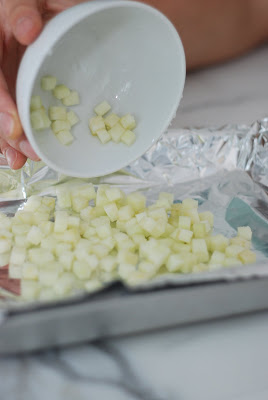 This recipe is a fairly simple one, without any staining of the shells. The first step was to cube a green apple, he calls for 8mm cubes, sprinkled with lemon and granulated sugar, then dried in a 90C oven for 1 hour. 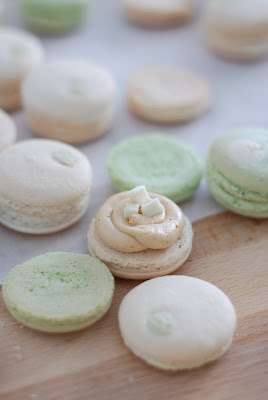 This is really simple to do and the results are interesting. The cubes of apple shrink in and become chewy, almost like a soft, fiberous pillow. One thing about these small pieces is that they often get lost in the salted caramel, if I were to make it again, I would slice small coin-shaped rounds of apple and dry those to make for more bite in the macaron filling. 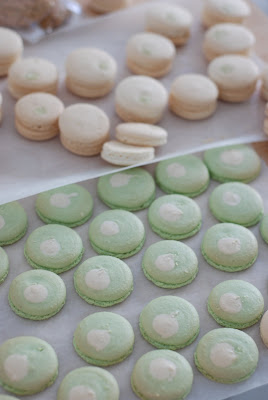 Of course, I was also tempted by other colours and patterns of shells, in particular his Chilli Chocolate macaron named "Hope", which featured red and white shells, each dripped with the alternate colour. The lesson here is to drip the alternately coloured batter while the shells are still wet and before they form a shell, then, like the green shells, the pattern will be part of, rather than built onto the surface (as in the white shells). 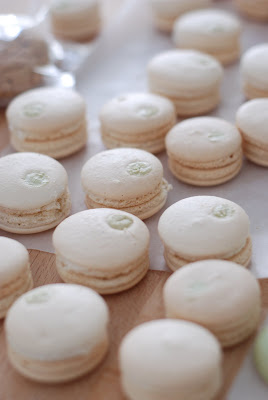 To my surprise, the shells came out roughly the same size. This is probably because the green shells were piped slightly smaller. This batch of macarons were also much fluffier than the last few, I've realized that if I whip the meringue at a faster speed but for a shorter period of time, the meringue volume is larger and the shells will get some air bubbles, but the texture is much lighter and aerated. 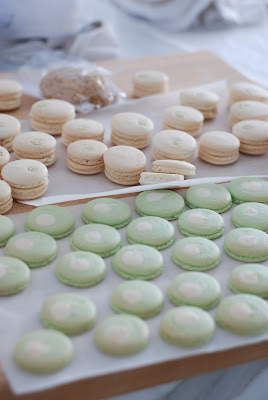 I also brought the baking time down by a minute, which produced a just-right texture. This was evident from the macaron height and the crisp yet delicately fragile feel of the underside of the shells. I knew they were good since my picky father praised both the look and taste of the macaron as "I must say, these are very good". 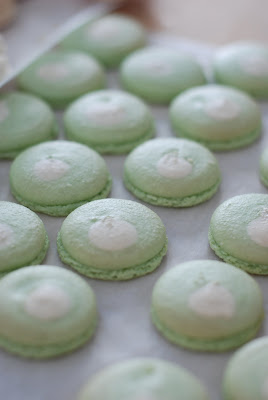 I matched up the green to the white shells and piped in the salted caramel buttercream filling. If you follow PH's salted caramel recipe, you will get a more caramel heavy filling, as he beats in butter, rather than butter meringue. His filling will be stronger, sweeter and denser, but probably more liquid, so the macarons will definitely be flatter but the apple pieces might be easier to discern. 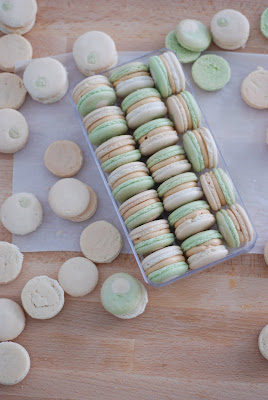 I think they look really pretty in the mixed colours, don't you? I looked up the Frivolite recipe online and found the recipe easily available but most of the pictures of the macarons on blogs, to my mind, don't pass as macarons- either the filling is melted, the shells have no height or the bakers have taken real liberties with the colouring.