I am not generally a fan of buffets, as I think food should be freshly-prepared and consumed at the peak of its perfection, rather than laid out for hours as it loses moisture and attracts bacteria. 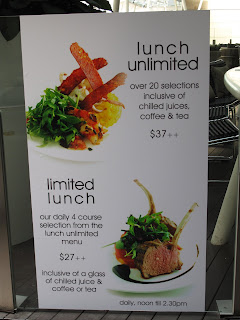 However, there are also the "new generation" buffets, where a never-ending stream of food is served to you without you having to walk to any buffet counter. The newest and most talked-about of these is 7atenine, which offers a "tapas" buffet for lunch, meaning you are given about 15 courses of bite-sized morsels, with an option to request further portions of dishes that you enjoyed. 7atenine also offers an Express Lunch, but really, it's obvious that people come here for the full monty. 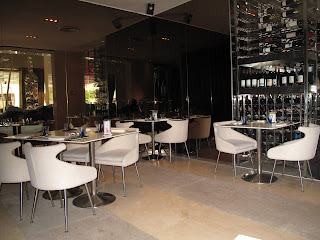 7atenine boasts an al fresco dining area, but I imagine that during lunch most people prefer to sit indoors, where the air-conditioning is fairly dramatic, cooling the entire restaurant despite the fact that the door is left wide open.

The restaurant's menu is divided into various themes, i.e. "from the sea" or "from the land", and you can specify particular preferences when ordering. Otherwise, however, you give the chefs discretion to prepare your meal, and you'll receive a mix of tapas. A recurring trend with many of the buffet dishes is that they can either prepared far in advance, or do not require very much preparation, which obviously makes a lot of sense, given 7atenine's concept. 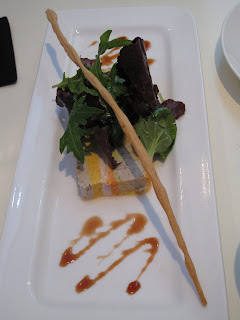 Our first dish was a summer vegetable and feta cheese terrine, which was rich and creamy, but I thought it undervalued the summer vegetables: blitzed up into a terrine, their vibrant colours and fresh texture were inevitably sacrificed. Blogger is having trouble uploading this photo, and Flickr seems unable to resize it to the dimensions I want, so you'll just have to live with some extra-large photos. The tuna tartar with wasabi cream and tamago was a juxtaposition of textures, but not so much tastes: the wasabi cream was not very strong, and the tuna tartar did not, for some reason, emerge as forcefully as I thought it should have done. 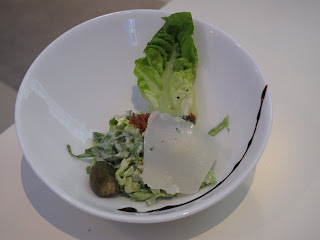 Another recurring trend at 7atenine is that its hit to miss ratio is not very promising. It is generally very difficult to mess up Caesar salad, but because the lettuce leaves were all julienned, they tasted limp and lifeless instead of crisp and bursting with vibrance. Nor did it help that the salad was rather too lukewarm for my liking. 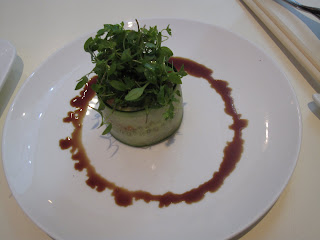 The apple and ham salad was also well-intentioned, seeing as how ham and apple sauce is a fairly classic combination. Unfortunately, the salty ham hock was somewhat overpowering, and the cucumber ribbon splayed rather than sliced when I attempted to assault it with my knife and fork, creating a bit of a mess. 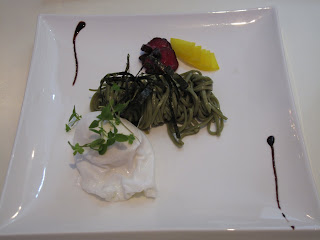 The pasta course was a serving of green tea pasta garnished with seaweed and a poached egg. The pasta was served chilled, rather like a green tea soba, and while this was by no means bad, I thought the dish was, overall, not as well-balanced as it could have been. The green tea pasta was (and was meant to be) fairly neutral in taste, and though the poached egg provided a natural, rich and unctuous yolky sauce, that too was also a bit bland. I thought a pinch of sea salt could have done much to perk up the pasta. The last of our appetisers took the form of beef tenderloins served on hot stones. These arrived sizzling and sputtering, exuding a delectable trickle of meat juices, and you could see the meat visibly cooking on contact with the stones, achieving a subtle gradation from brown to pink to red. 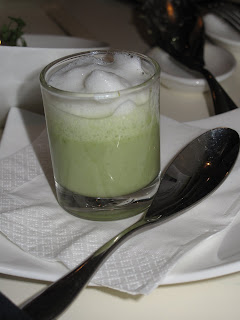 Leaving the "starters" segment of our meal, the initial main course was not very promising. Supposedly a zucchini cream soup, the stock used was far too strong, and the dish ended up tasting like green chicken soup, with no hint of the delicate zucchini at all. 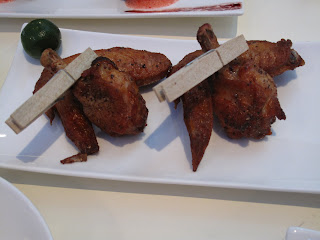 I'd heard a lot about 7atenine's chicken wings, and their "love them or hate them" clothes pegs. Personally I think they're quite cute, though I am a bit dubious as to their functional utility (some have suggested they're meant to prevent your fingers from getting dirty but that seems unlikely). Chicken wings are chicken wings - very difficult to get wrong, but not very much you can do to make them outstanding either. The next course was my favourite of the meal: udon parmesan and truffle sauce. Something like a cross between a carbonara and a creamy mushroom sauce, this worked very well. The heady aroma of truffles, the heavy stickiness of the parmesan, and the starchy udon melded into each other, absorbing and cross-infusing, and the end result was a delectable, albeit rather rich, carb-heavy dish. 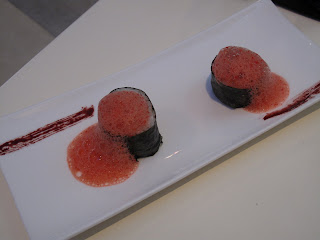 The following dish I was not quite so fond of, however. Billed as "tomato sushi", it was exactly what it sounded like: a sheet of nori wrapped around some rice, which enveloped raw tomato and was topped with (what I assume was) tomato foam. This didn't really work for me: I don't really see the point of combining a fruit with rice and calling it sushi. 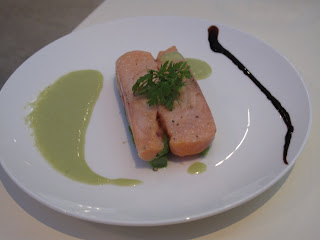 The fish course was a pan-seared salmon with asparagus, which was competent, though somewhat unremarkable. This is not necessarily the fault of the restaurant: salmon is one of those unrewarding foods that, even if perfectly-executed, never quite achieve sublimity; yet when they are slightly mis-cooked everyone thinks you're useless. 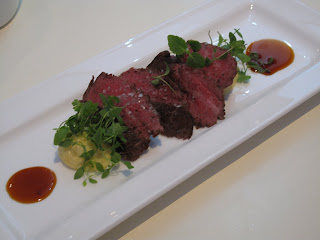 The wagyu beef sirloin with polenta was not that satisfying; sliced rather thinly the meat soon became cold and dry as the precious moisture quickly leached out. 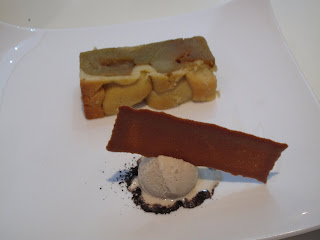 I always feel that desserts are the worst part of a buffet, and 7atenine was really let down by its desserts. The apple tarte tatin was not at all pleasant; the apples were jarringly tart and the pastry surrounding it was thick and stodgy. 7atenine pioneers a brave concept, but its execution, as yet, leaves much to be desired. There are many more misses than hits, which is a great pity, as the food is innovative and inspired, and is trying to avoid being labelled as "gimmicky". Hopefully 7atenine can work out its teething problems and provide Esplande-enthusiasts something other than the arts to be excited about.