"Don't worry," my father said, seeing a shadow of apprehension cross my face, "the food is not going to be that exotic." 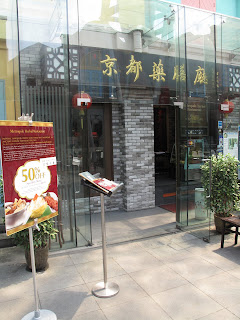 The Metropole Herbal Restaurant in Clarke Quay is one of my father's new favoured Chinese restaurants, and after having lunch there with him and some of his friends, I can see why. Usually I'm a bit leery of Chinese herbs, as they tend to be strongly flavoured, evoking some rarely-encountered tastes and oral sensations. But the Metropole Herbal Restaurant serves delicate and sumptuous Chinese fare without you having to politely decline every other course. 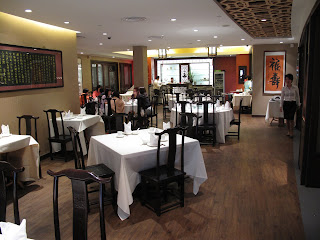 The restaurant seats 100 diners quite comfortably, and is pretty quiet at lunchtime, ensuring prompt and friendly service. Apparently, however, it's rather crowded for dinner, so a reservation is advisable. 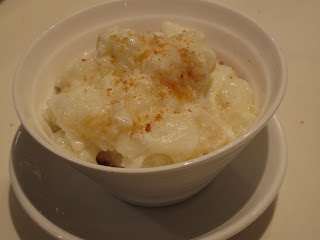 Being a herbal restaurant, all the dishes are intended to improve your health and well-being in some way, while still being delicious and even hearty. Our first course was a bowl of scrambled egg whites on a crispy potato nest with shredded scallops, said to be good for lowering cholestrol. The egg whites were fluffy and slightly creamy, and when contrasted with the crunchy potato strands, laced with some vinegar, provided a burst of varying tastes and textures. 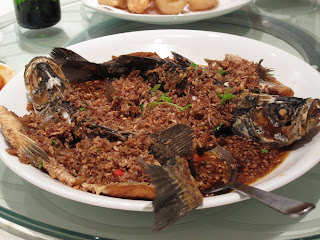 Next up was the obligatory fish course, which appeared to be fried, though the flesh remained soft and delicate, lubricated by an umami sauce that was liberally enlivened by some fried "stuffing" - almost like Chinese rice krispies. This was a popular dish, and deservedly so, as the sauce was light and sweet, easily complementing the smoothness of the fish and the crispiness of the condiment. 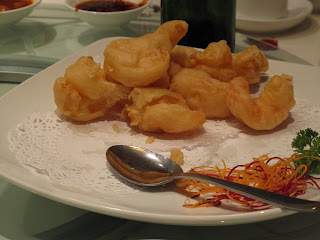 The prawn fritters were a little heavy for my liking; I thought the batter seemed a bit stodgy and deflated, though that may have to do with our humidity. Otherwise, they come served with a creamy mayonnaise - safe but nothing that special. 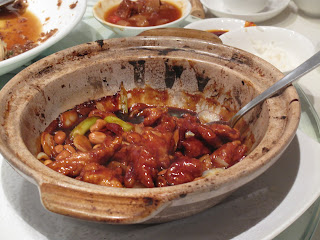 The following dish was a spicy hot pot of chicken, peanuts and greens in a thick, sticky sweet and sour sauce. This was served with some steamed and fried man tous, but, being the youngest at the table, I had to observe hierarchy and refrain from having any as there weren't enough to go round. I hear they are very good though, and are unusually shaped; twisted and wreathed to resemble seashells or fans. 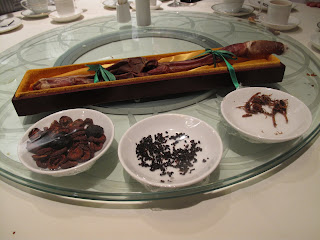 Lunch ended with a presentation of some of the more exotic ingredients the restaurant uses: deer's whip, dried ants and scorpions. Thankfully, none of them went into the preparation of our lunch.

The Metropole Herbal Restaurant is a nice change from the usual offering of Cantonese, Teochew or Szechuan cuisine, especially if you're sick of the mindless parade of poor cafes and restaurants in the Clarke Quay area.