Berjaya Hotel at Duxton Road has, I am told, a very long and distinguished history, though just what this history is I have never quite discovered. The tasteful nude portraits adorning the walls of the lavatories, however, hint at something slightly less genteel.

Nonetheless, it was with some regret that I learned the hotel's French stalwart, L'Aigle D'Or, had closed, and had been replaced by a new Italian restaurant, Saraceno. Still, I had fond memories of L'Aigle D'Or and was keen to see if the newcomer would live up to its illustrious forebear. 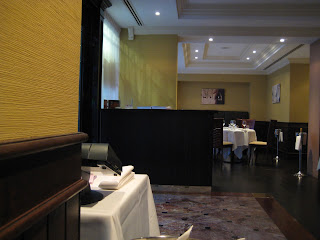 Apart from temperature, the restaurant creates an impression of ample space; diners are seated a decent distance from other patrons, though this does not mean that boisterous conversations do not still penetrate your own private tete-a-tete. 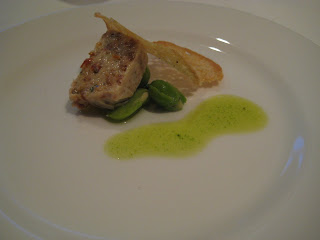 Our amuse-bouche took the form of a chicken parfait with fava beans, which was tasty enough, but somehow just seemed like a miniature starter, rather than the intricate morsels designed to tantalise the tastebuds. 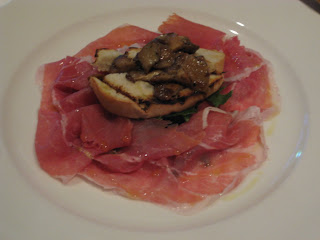 I ordered a helping of prosciutto with porcini mushrooms, which had a nice rippling of fat and was quite delicious. 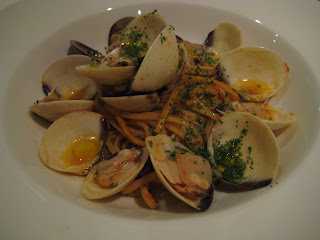 I find that some sort of vongole dish is becoming increasingly popular, which can be a dangerous thing, as some unscrupulous restaurants put it on their menu but serve you clams out of a tin. Saraceno's version came with plump, voluptuous clams that definitely had not seen the inside of a tin, but sadly the dish was let down by a few features: the pasta was overcooked, rather too much oil had been used, and an excessive use of chilli had obliterated the delicate perfume of white wine. Still, none of this is irreparable, and I hope that these minor infelicities do not, in the long run, detract from the wonderfully luscious clams. 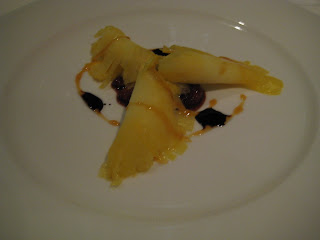 One of the desserts Saraceno offers is both unusual and inventive. Ravioli di ananas comprise thinly shaved pineapple slices curled over lemon sorbet with a drizzle of balsamic vinegar. The tartness of the pineapples, the citric fizz of the sorbet and the sweet acidity of the vinegar create a panoply of flavours that refresh the palate. 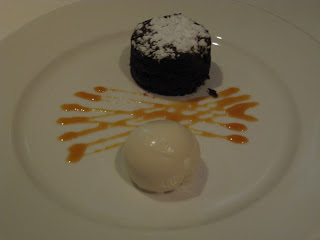 More traditionally, Saraceno also offers a warm chocolate cake that is quickly becoming de rigueur in all self-respecting restaurants. Suitably warm and delectably unctuous, I think the best defence against all those who rail against how plebeian the warm chocolate cake has become is that it's now essentially a comfort food, rather like creme brulee.

Saraceno can afford to fine-tune some of their cooking, but their prices are quite reasonable and service is both prompt and personable (the table next to me managed to cajole the waiter into bringing them some "Chinatown roti prata" instead of bread; and they really did bring some roti prata!). The restaurant is as yet undiscovered, and with enough discerning patronage, has the potential to become a diamond in the rough (no aspersion intended on the Tanjong Pagar area).