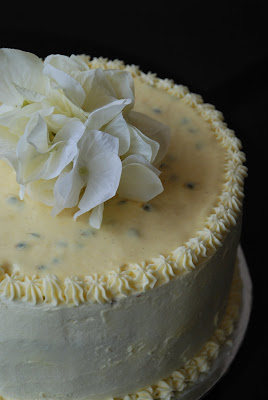 Most of you would probably have been familiar with my last post about having a craving for the springtime yellow lemon tiered cake that appeared in a Martha Stewart magazine some time back. Even if you had not been, you may have seen my last enthusiastic, slightly ghastly perhaps, attempt. While I was gratified by the height of the cake, I felt that my icing skills could use some work.

The cake turned out a medium yellow, with pale yellow and chrome yellow iced ribbon and some purple daisy and silver dragee decorations. With its lemon poppy seed zing and the flavoured buttercream, it was absolutely delicious but had a bit of a party pop flair to it. A kid's party, that is.

Undaunted I went out, bought a turntable, then proceeded to procrastinate making another cake. The problem was really that the number of steps involved in making a layered cake and then finding an occasion big enough to eat an entire cake, was still such that it remains quite a party trick. First, you have to make each flavour of cake. For this cake, there were two flavours, lemon pound cake and lemon poppy seed cake. You bake each cake in a round cake tin of the same size. then you turn out each cake and slice it evenly into two half rounds. 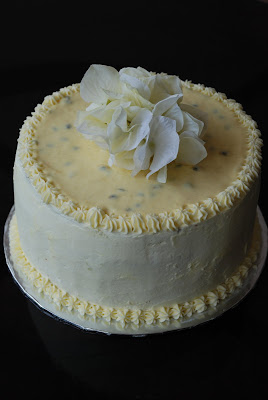 Then you stack each half alternately onto each other, beginning and ending with the flat bottom of each cake and sandwiching each layer with home-made lemon and passionfruit curd (yes, this is where the excess lemon and passionfruit curd from tarts went to). The next step is to smear some buttercream around the sides of the cake to even out the round shape and then to refrigerate it so that the whole cake sets and the crumbs that inevitably flick off the sides and top of the cake set into the thin layer of cream.

The last step was a few hours later when the cake was relatively hard. This involved softening the buttercream, then smoothing layer upon layer till the whole cake was smoothly and evenly covered with cream. Scraping the remaining cream into a piping nozzle, I made a dam of piped stars along the top and bottom circumference of the cake (all the better to hide my messy icing endings with, my pretty). I could have left it simple and neatly covered, if a little boring looking. The top of my cake had been very well-iced. But I thought, oh, what the hey and added a layer of passionfruit curd on top, then topped the cake with flowers.

When you finally get done messing and smoothing about with your layered cake, there is something immensely satisfying but almost paranoid about the feeling you get. It's a bit like having a child actually, after all your efforts and worries and anticipation, it's a bit overwhelming, almost, to see your expressions and features, but in this case, your aesthetic and crafting vision, take physical form. 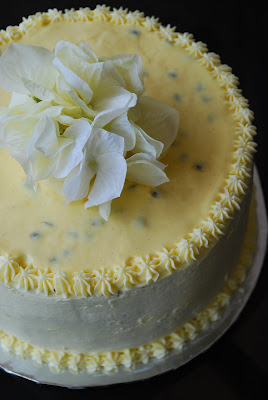 Halfway through, I thought- this cake would look so sophisticated, if I iced it in tan-coloured salted caramel cream and then topped it with a circumference of white icing and a topper of white flowers. Or what about pink buttercream with a brown and fuschia flower topper? (I am so excited to get my Sarah Masjid Organic Cakes and Cake Decoration book soon!).

As it was though, the palette of ivory, white and pale yellow made for a very understatedly gorgeous, if a little feminine, cake. The cake was rather thick, it must have stood at a good four and a half inches tall (even though this cake had three layers inside, rather than the previous cake that had four), so I cut each slice fairly thin. It was dense, lemony, sandwiched in lemon passionfruit curd and delicately iced in buttercream. And when I sliced through it, it cut cleanly into three gratifying distinct and beautiful layers. Lots of oohing and ahhing, just as a good party trick should have.
Posted by Weylin at 5:47 PM