I've noticed that Singapore is starting to display It restaurants, which (at least in relation to It girls) Wikipedia defines as something that "receives intense media coverage unrelated or disproportional to personal achievements", and that the reign of an It restaurant is "usually temporary"; as it either becomes famous in its own right or its popularity fades. 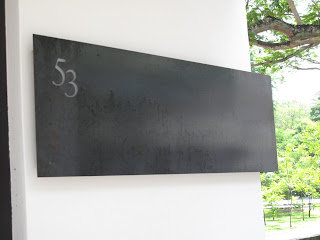 Derogatory overtones notwithstanding, FiftyThree is one of the latest It restaurants that is charming, sexy, and giving diners here lots to talk about - mainly the rather extravagant dinner bill, but also the minimalist decor, the inventive cuisine and the exclusive clientele. 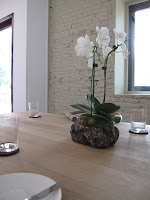 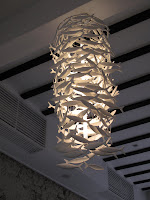 Long wooden tables match the soft, pale stones adorning the walls, and the white orchid centrepieces emphasise the light tones the restaurant intends to evoke. The fish lamp seemed oddly out of place, but the coralstone material the fish were made of at least allowed it to match the walls, though I suspect its inclusion was more sentimental than decorative.

Due to the restaurant's size, FiftyThree does not accommodate very many diners, and this may lead to some awkwardness. You can check the restaurant's website for further details, but we were rather dismayed at being seated at the entrance to the kitchen which, curiously, has no door, resulting in odours from the kitchen wafting over us - not a pleasant experience when you have an important post-lunch meeting. The staff were quite accommodating, however, and managed to move our table some distance away from the kitchen, alleviating, though without eliminating, the problem. Apparently the alcove-like second floor is wonderfully quiet for a long, intimate lunch and very well-spaced. A table upstairs is a good idea unless you are a large group. The bread "basket" is an unusual affair at FiftyThree. More a gunny sack than a basket, and more muffins than bread, and accompanied by a shallow dish of buttermilk butter sprinkled with oats and barley, there are a few cavills regarding the bread. While I appreciate the effort it takes to warm up the bread and the heat-beads in the bag, this also means it takes the bread quite a while to arrive, which, when coupled with the fact that there are only as many pieces of bread as there are people at the table (give or take a few), and that the waiters are not particularly spontaneous at replacing the bread bags, can be a somewhat rocky start to the meal.

My main complaint about FiftyThree, as will soon become apparent, is that like an It girl, it manifests much potential, but is far too precious for its own good. One example of this that irritates me is that the website has no menu, which makes it exceedingly difficult to remember what precisely it was that I ate, and whether the food this week is different from last week's.

The menu in the restaurant is also unhelpful: I would appreciate more information about my food than the main ingredients it contains. "Broken Hokkaido scallops. Chicken oysters." is a shopping list, not a menu. 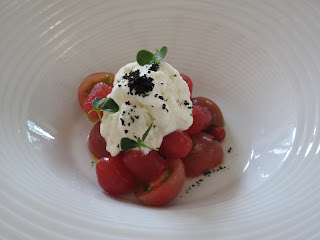 But when it comes to the important things, namely, the food, FiftyThree does not disappoint. My starter of sweet, skinned Japanese cherry tomatoes and chilled watermelon cubes, paired with a horseradish foam, was cooling, spicey, invigorating and inspiring, all at the same time. The dish was disarmingly simple, but packed an arsenal of tastes and sensations. 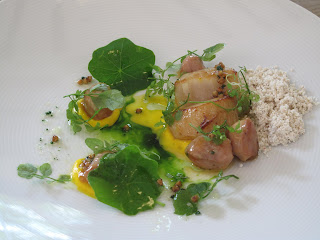 My father had the aforesaid scallops with chicken oysters, the other ingredients remaining anonymous since there is no online menu to cross-reference. Apart from a rather petite serving of scallops, the ingredients worked well together to create a luscious, toothsome whole. 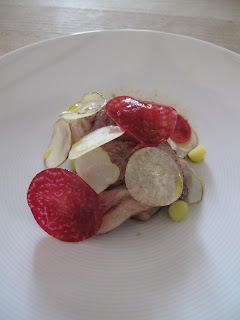 My own rump of lamb was slow-cooked sous vide and pan-seared for flavour, served with finely-sliced discs of beet and turnip. Succulent and tasty, with the right amount of bite and give, this would have been a lovely dish if there had been a bit more of it, but FiftyThree tends to serve smaller portions than you'd expect. 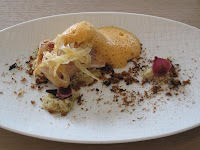 Due to the aforementioned lack of a menu, I cannot remember what exactly these two dishes are, except that the one on the right is a cod dish with what might have been paprika foam. 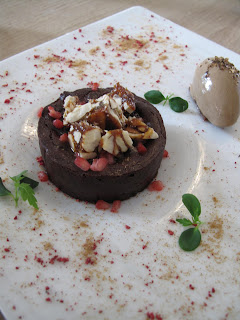 One of our desserts was FiftyThree's version of the ubiquitous molten chocolate cake, which came studded with nuts and what might have been candied fruit peel. I didn't enjoy this unreservedly, as I thought there was too much going on on the plate: the oozing chocolate, the chewy fruit, the crunchy nuts competed for attention rather than working harmoniously together. 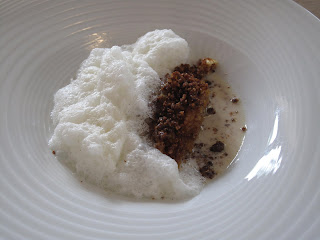 I had the apple risotto with rosemary foam, which turned out to be apple that had been finely diced and caramelised so as to resemble risotto grains. Rosemary seems an unusual herb to use in dessert, but with its pungency diffused, the lemony scent actually worked quite well with the sweetness of the apple. An interesting and creative dessert, this is not something you see everyday.

In addition to the food, FiftyThree boasts an extensive wine list. In fact, only about a fifth of the menu is dedicated to food, which may be attractive to all the oenophiles out there. FiftyThree is definitely going to attract lots of customers with its modern approach to fine cuisine and its rather personalised service, but unless they start being more accommodating and less uptight (and a bit more generous with the portions during lunch), true celebrity may always be just out of reach.