Macarons: More than a one-trick pony? 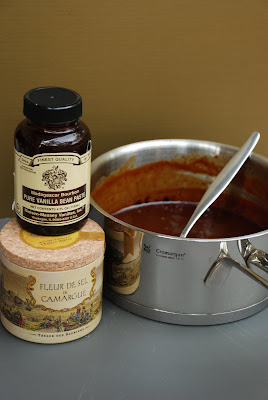 After a tremendous weekend of macaron baking, I was satisfied that I sort of had the technique down. Sure, it wasn't perfect, sometimes they were a little flatter and they still had an annoying granularity that K's macarons seem to be devoid of but they all had happy, thick, luscious feet and they peeled off the paper easy enough and I was feeling pleased with myself.

You would think that would be reason enough to kick up your heels and sit down with a dark chocolate ganache or a salted caramel macaron. But no, Z. had to taste them and say, yes, but how come you always make these same flavours? "That's all I know how" I replied rather haughtily and with as much dignity as an amateur macaroner can be expected to have.

"You are a one-trick pony", he beamed. Well, technically, I was a two-trick pony...or a two-flavour pony, which I suppose, is kind of a zebra. Point taken. With Colin's suggestion that I could try (meaning, I suppose, that he wouldn't mind eating) a passionfruit and milk chocolate macaron ala Pierre Herme and the long weekend ahead, it seemed like a good time for further experimentation.

For a week, I randomly pondered flavours and colours. Could lemon curd be sandwiched in a macaron? How about glace ginger- never mind that I don't even like glace ginger but it seemed a terribly sexy thing to put in your macaron. Green macarons? I'd done green tea before, with chocolate ganache and even with chestnut puree for my cousin when he came down with the mumps but I'd been slightly biased by the pasty, rather musty taste of chestnut and the ease with which it curdled.

Lychee and raspberry?, I texted K. Basil and lime? Raspberry White Chocolate? One late night, it came to me- Rosemary shells with Pineapple Jam, I suggested to K. excitedly. For Chinese New Year! "Too exotic for me, I doubt the old people will like", the answer came back. I guess the symptoms of macaron madness are fairly obvious. I was undeterred. The long weekend rolled around and by the time it did, I grudgingly admitted that coffee buttercream would probably be a good place to start and that no, I had never in my life liked black sesame so I probably shouldn't embark on that. 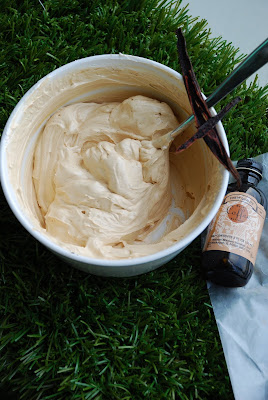 I didn't understand how I had managed to leave it till months into my macaron experience to make coffee buttercream but truth be told, I was a bit worried about pouring acidic coffee into buttercream. I dissolved the coffee granules and added, for good measure, a teaspoon of Neilson-Massey's beautifully flavourful coffee essence and half a vanilla pod. I needn't have worried, the buttercream swirled into a creamy smooth, speckled coffee coloured mix that was easy on the eye and on the wrist. The reality was I was so concerned, I probably under-flavoured the buttercream, though I discovered the next day that the taste does get stronger as the days go by.

I piped it into hazlenut shells and sandwiched dark chocolate ganache inside the swirl. I also used chocolate shells for the coffee and dark chocolate combination of filling. This found quite a bit of favour with the older people, I noticed, in particular, the men, rather than the women.

In this round, I'd used a french butter, so the lot of buttercream was white. Not wanting to miss my chance, I flavoured it with ginger juice, lemongrass juice, vanilla seeds and grated ginger. Then I piped it into plain shells and buried a small piece of glace ginger within each. 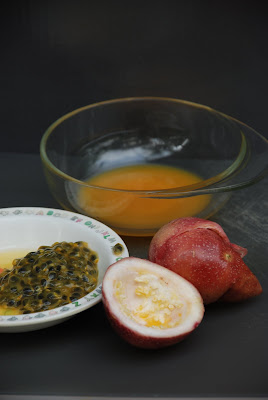 What was left? The rest of the batches were tinted yellow and flavoured with passionfruit juice, which I extraceted by straining the seed (the seeds then went into the lemon-passionfruit curd). Then half were sandwiched with lemon curd and the other half with milk chocolate. This turned out somewhat alright, except that in my zeal, I had put in a couple drops of Nielson-Massey lemon extract, a very bad idea as it overwhelmed the passionfruit juice. 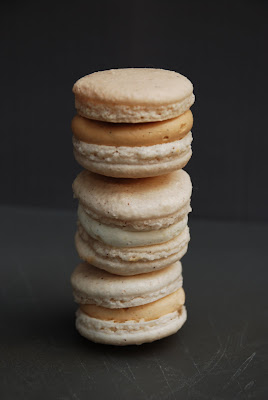 At the end of the day, I had solved some mysteries. I understood that the reason for my grainy macarons was because my sieve was not fine enough and also, my macronage process was not comprehensive enough. But the biggest lesson I'd learnt, is that nobody actually wants to eat ginger macarons and even lemon curd or raspberry white chocolate macarons, oh yes, they have their occasional fan....but most of the feedback, went something like, more dark chocolate ganache ones and no ginger! I guess the reason I'm a two-trick pony is that those are the ones that people actually like!
Posted by Weylin at 7:01 PM