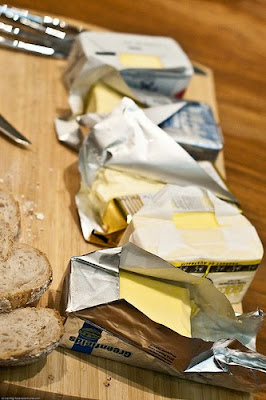 Over the last couple years, I'd written many diatribes about supermarkets and grocery prices in Singapore. Alarmed by the rapid rise in price of basic food and dairy prices, I wondered how the average Singaporean was coping and if they were being scammed by grocery companies, which were, the last time I checked, still making healthy profit margins.

Of course, we in Singapore are lucky, there are a multitude of cheap eating stalls and generally, you can still afford to eat well but gradually, it appears that you won't be able to afford to cook. Last week I decided to act upon an idea that had been brewing for a while and, instead of reviewing a restaurant, try to add value as a blogger by reviewing something far more sensible.

My central premise was that all butters are not created equal. But surely, some butters were more economical than others and I wondered, is there a difference between butters? Was it possible to get a good deal? The best balance between taste and price? Which was, for want of a better term, "luxe for less"?

These prices compare to the creme de la creme butters (literally), at $5.60 (from NTUC) for Lurpak, which was the unanimous favourite amongst all the bloggers and $5.20 (from NTUC) for President. I avoided buying a block of Anchor ($3.70, $3.20 on special at NTUC) because I already knew we all disliked it and made a concession for SCS, even though some had already registered their distaste for its oilyness, only because it's such an iconic Singaporean brand.

Generally, most of the low-range butters that are available in Singapore are from Australia and a couple are from France. The first conclusion is yes, there is a difference between butters, both upon a blind tasting and also when you use them in say, butter cake. I tend to find that the more solid, pale-coloured french butters are in fact, a lot less oily than the darker yellow butters, say like SCS. Your cake tends to be less dense in texture, with flaky granules rather than melted, heavy ones. I also think where the butter is a dominant feature, like in buttercream, there is a rich wholesomeness to using President for a macaron filling and it clearly gives a white, rather than a yellow tint to the cream.

Our notes on the butter tasting were that Goldtree, as I suppose you can expect from its dark yellow colouring and super cheap price, had no taste at all and was declared the worst one. Greenfields had a weird synthetic, very buttery tasting aftertaste, which, although artificial, didn't taste completely out of sync. SCS was also rather buttery, with a similarly oily aftertaste.

The Petit Normand was a lighter tasting butter, somewhat tasteless unfortunately but with the characteristic paleness and sweetness of french butters. Elle et Vire was the best tasting, the lightest and the one that approximated the nuanced flavours that one associates with good quality butter. It was probably the closest proxy for President butter that we had.

So there we have it. Apparently one can buy President when it goes on special and just hoard and freeze it (Lurpak apparently, never goes on sale) but if it were my choice, I guess I would use Le Petit Normand or Elle et Vire (on the 6 piece special price) for my baking. Or maybe skip the mid range altogether and use Greenfields for regular baking and upgrade to President for buttercream!
Posted by Weylin at 9:21 AM

Thanks for the butter review! Helps a lot! I've been using SCS for the longest time, only occasionally using Golden Churn (tin version) for pineapple tarts and I was wondering whether I should try other butters.