I've been putting off blogging this entry for a number of days (weeks) now because I've been distracted, so I apologise to those who've been anxiously awaiting new updates about where to eat.

Every once in a while, I am reminded of why, for me, dining out is more than just a matter of going out, forking out some money and eating what's placed in front of me. It's true that eating is such a visceral and fundamental part of our being that, to some extent, writing a paean about it seems ludicrous. But if we've turned writing, singing, or some other natural human activity into artforms, why shouldn't the same be true of eating? 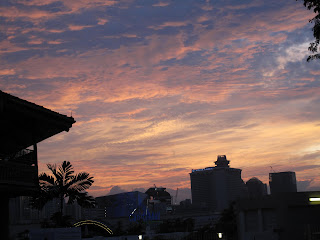 In which case, it's not just about the food. Everything from the fall of the tablecloth to the design of the bathroom, and even the blush of falling twilight, comes together in a confluence of sights, sounds, smells, tastes, and expectations, well before you've even entered the restaurant or picked up your fork. 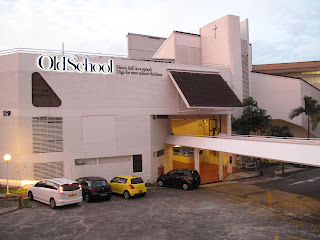 One of the places where I've had a bit of an epiphany is Chalk at Old School. I'd never even heard of Old School, on Mount Sophia, and I was pleasantly surprised when I got there. An old Methodist Girls' School has been converted into an arthouse district, complete with independent cinema, a popular bar (Timbre), and a lovely restaurant. 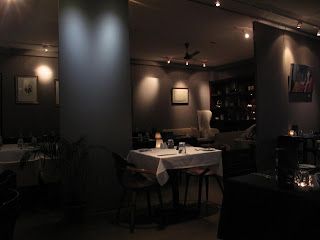 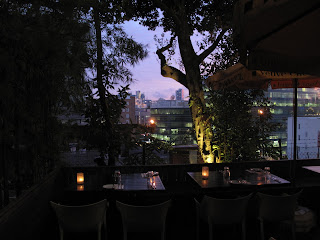 Chalk is a large restaurant, with both indoor seating and an outdoor verandah. Lights are dimmed and tables are spaced far enough that only snippets of neighbouring conversation filter through from time to time. Service is fairly on the ball; waitstaff take the trouble to clearly explain the specials of the day, instead of rapidly mumbling some prepared speech.

As for food, Chef Marcus has brought with him a confident and skilful team, and Chalk is one of the few restaurants that handles both Italian and French cuisine with equal deftness, without collapsing into hopeless confusion. The restaurant also offers tantalising daily and weekly specials; look out for them on the chalkboard. 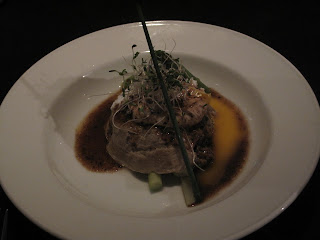 My starter was a mushroom timbale served with a poached egg and some asparagus. A light, almost creamy mushroom pate enriched by the broken, runny egg yolk and made more interesting when contrasted with crunchy asparagus spears, this dish was not technically complicated, but was executed with straightforward ability - something that sounds simple enough, but is so rarely attained by restaurants. 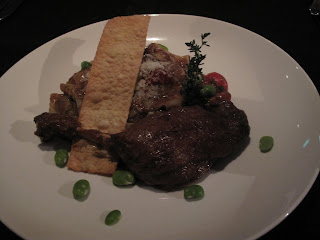 This theme continued with the main course. A braised duck pappardelle is not, all things considered, a particularly creative or difficult dish (though I must confess I have yet to produce one that I've been wholly satisfied with), but done well it is sublime, and Chalk's version is definitely done well. The helping of pappardelle was just right, the sauce was just the right consistency and the duck leg was braised beautifully. The beans lent colour and texture to a deeply robust dish, providing a nuanced lightheartedness in their unexpected presence. 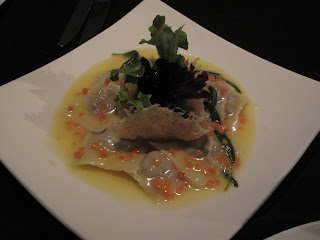 The other duck/pasta dish on the menu is the duck ravioli with a butter sage sauce, which I didn't enjoy as much, but is something out of the ordinary, served as it is with tiny diced carrots and a lush, smooth sauce perfumed with delicate hints of sage. 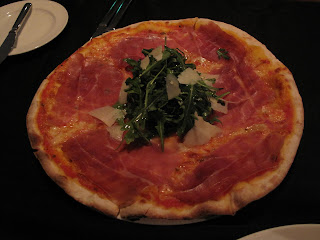 Continuing the Italian trend for the evening, the pizza was thin, crusty, and tasty, packed as it was with slices of parma ham, a handful of arugula, and just the right amount of cheese. Pizza aficionados should not be disappointed. 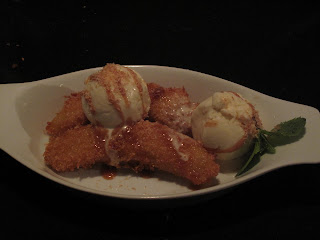 Desserts run the gamut in Chalk: on one hand you have the traditional puddings and souffles, while if you're lucky (depending on how much you like bananas), you might get fried banana fritters with coconut ice cream. I suppose these are essentially goreng pisang, but they went well with the coconut ice cream, which was mild and complementary, without tasting powdery or artificial, as shaved coconut usually does. 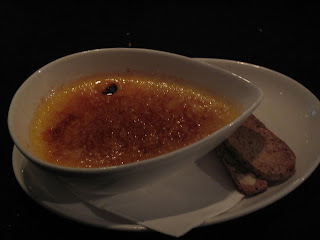 For the more traditional dessert purists, there are also classic favourites such as creme brulee, served in a classically shallow dish, maximising the space from which the browned, glistening shell of caramelised sugar winks up at you. 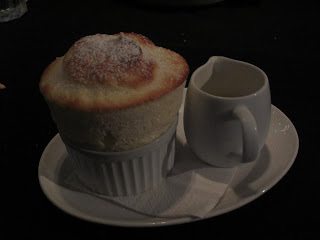 My own dessert was a passionfruit souffle, served with creme anglaise. There is something unabashedly suspenseful about ordering a souffle, part of which comes from it having to be cooked a la minute. The question is always, "was it worth the wait"? Well, Chalk's passionfruit souffle certainly was: towering majestically out of its ramekin, the souffle was airy, not too eggy, and the characteristic sour-sweetness of the passionfruit embedded within every cloudy tuft and bubble of protein.

Another dessert to try is the sticky toffee pudding, which no self-respecting Australian chef leaves off the menu. A rich, pillowy pudding that never feels dense or heavy, glazed over with a thick, unctuous coating of toffee syrup, paired with a creamy vanilla bean ice cream, I imagine the average time before the whole pudding disappears is something like twenty seconds.

It really is back to the Old School philosophy of eating with Chalk, nestled on Mount Sophia: old-style attention to detail in food preparation which results in some truly enjoyable food at generous prices (in their words, "we don't do +++"), meticulous and hands-on service, and a charming ambience. Chalk may not produce mind-boggling high-end gourmet cuisine, but they take acute pride in serving you high-quality, contemporary, tasty and beautiful food that is treated with respect, which is more than can be said for many restaurants that purport to be exclusive or avant-garde. Honest, intelligently and well-cooked food not only respects the dish, but more importantly, the diner, in providing him more than just a meal, more than just fuel for the body, but in engaging him in an unspoken dialogue that whets the appetite, excites the mind, enriches the soul and nourishes the being: in short, a true experience. I can think of no more appropriate restaurant to be commemorating the Old School than Chalk, and I look forward to further offerings from this delightful location.

Your blog keeps getting better and better! Your older articles are not as good as newer ones you have a lot more creativity and originality now keep it up!