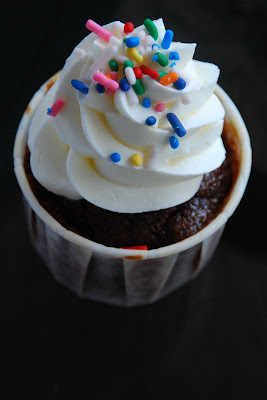 These were my little minions for an office tea to celebrate the anniversary of a colleague and the almost-end to a tough work period. The base was a chocolatey, chunky chocolate banana cake and I beat some buttercream for frosting.

Now that I have discovered Italian buttercream (as opposed to Swiss Meringue buttercream, do you know the difference?) and since discovering that buttercream is actually not meant to be yellow, I've been icing everything white. I'm developing a white fetish (how wrong that sounds) for cakes because I know I can make bright white frosting. This is after I spent 3 years believing that buttercream was inherently yellow (it isn't, I just wasn't making it with French butter cos you know, heck, French butter is expensive) and thus has to be tinted into a darker, more palatable colour. And now that I've discovered which are the cheaper French brands of butter to buy in bulk, I can have French butter most, or at least, more of the time. 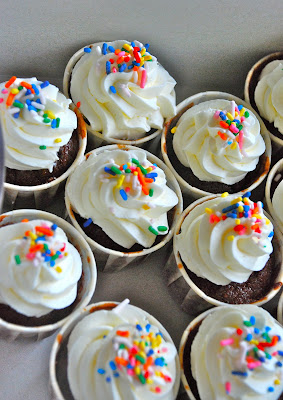 All this explains why the buttercream was, of course, white. I was also, though, having a hundreds and thousands infatuation. While I was searching for the best chocolate cupcake in sites like these, I had come across the cutest picture of chocolate ganache cupcakes with old school hundreds and thousands. Something about it triggered a childish memory of eating chocolate frosting (no kidding, I used to eat it out of the Duncan Hines paper jar) with sprinkles at the back of tuition class and suddenly I was craving childish cupcakes.

These ones come pretty close. They were delish and in their small, considerate size, even my health-conscious colleagues reached for one, abstained from scraping off the frosting and didn't ask the guy next to them to share!
Posted by Weylin at 10:03 PM