While in Beijing, I was privledged to learn about and sample some of the new products that different food and beverage companies are releasing in the China market. Since they are already in-store, I won't be giving away any trade secrets by sharing some of these innovative and tasty ideas with you. 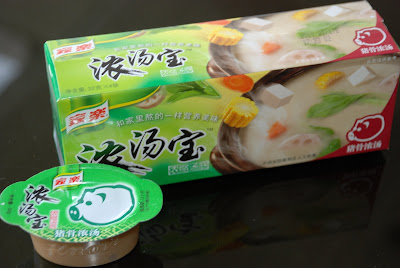 This was my favourite by Knorr's (Unilever), it's a soup base to make a classic Chinese thick, double-boiled soup. This is clearly a product that is targeted at Chinese tastes and can be extended for sale in other Asian regional markets.

Market research has shown that typically, the focus is on pre-packaged soup and soup mixes but this product is clever both because it's compact and it helps you make soup, rather than trying to sell you a supermarket soup. Although the soup market is huge in China, I think it's hard to find a generic and successful formula because soup is a very personal, family taste and is considered a home-made specialty. 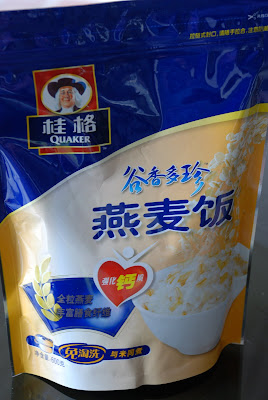 This was a product by Quaker oats, or Pepsi Co, which is a riff on their exisiting and popular oats. Actually, the chinese eat a lot of oats already because of their high nutrient content, so this is an innovative way of eating oats. You can pour it directly into a rice cooker and steam it together with your rice, as well as make a nutritious porridge or baby food. 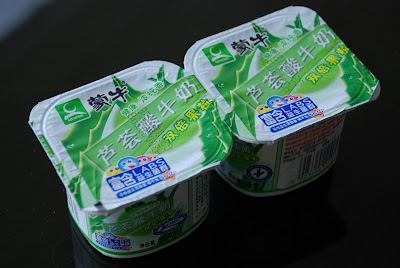 This is another great product, this time championed by a local company, China Mengniu, which is a dairy and milk producer from Inner Mongolia. This is their yoghurt milk drink, which is extremely popular in China, that has aloe vera bits in it. I was recommended this by a non-Chinese friend in fact and it has a wide popularity and appeal. The range of yoghurt and yoghurt drinks is just mind-boggling and really, good luck to Vitagen and Yakult! I wish we brought in just a fraction of China's varied offering in the sour milk category.

Given the size, breadth and potential of the Chinese market, there are now so many overseas companies and brands in China, many of which aren't even present in most of the rest of Asia. You notice that food bloggers are usually all up about French or Spanish foods and produce but actually as a rather enthusiastic consumer (let's not lie, eh), I often wish I had more access to the Mainland Chinese grocery and retail market.

You might recognize some of the big names, like Proctor and Gamble, Coca-Cola, Estee Lauder, Sephora, Carrefour, Walmart and H&M but there are actually tens of hundreds more, in part because of the large brand portfolio of some of these companies. For example, Estee Lauder owns LaMer, Clinique, Estee Lauder, Bobbi Brown, MAC and I believe Origins, so they own about half your cosmetics counters! Similarly, P&G and Unilever combined probably own half your processed foods and personal care shelves. While in Beijing, I was fortunate enough to do some store tours to a Walmart superstore, which cracked me up because of the cute red outfits and Uncle Sam's smiley face insignia on the souvenir badges. The produce though, was distinctly Chinese and I was impressed with their fresh, chilled and processed offerings.

These are two of the meats that I bought and carried back home. One is dried Chinese/Shanghainese ham and the other is the similar but saltier Fo Tui (literally, Smoked Leg), these are great for slicing up to flavour soup or to cook with steamed chinese cabbage. I bought some interesting local produce from Nanjing as well but more on that in a later post when I finally get around to cooking my purchase!

I'm looking for people to try out some of these products! Leave me a comment and address, if you're interested in testing out the soup base or oatmeal-in-rice. I'll send you some in return for your feedback!
Posted by Weylin at 10:17 PM