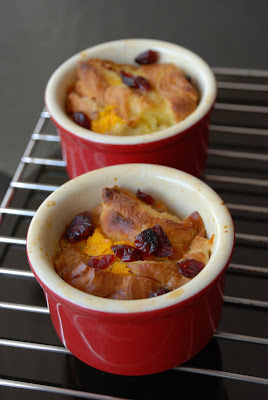 Notice how good things tend to come with a B&B....B&B Italia, Bed and Breakfast Inns and the third B&B I like- Bread and Butter Pudding! I'm not sure why I like this classic British dessert, except that my mom did say she had a lot of craving of this when pregnant with me.

By the way...these are my new red Cuisineart ramekins from Corduroy and Finch's crockery sale. I remember when I was younger, I used to dig up "English Teatime" recipes for bread and butter pudding and try to use Gardenia bread to create what was invierably a pretty soggy, fatty bread tart. Well, those days are gone. 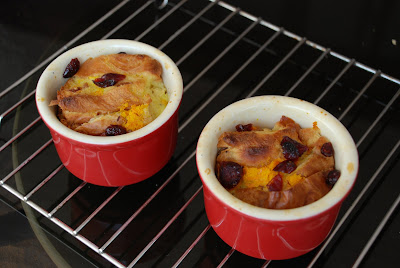 This bread and butter pudding is light, yet custardy and I haven't found a single person who didn't like it. I made it for a family dinner a couple nights ago in a larger tray and it was immediately finished and complimented by the older and younger people. The recipe is super simple, quick and virtually fool-proof.

What makes it special is, I think, four little steps that I do different- I used brioche bread, which is richer and softer than regular bread, I also boil the milk with pandan leaf and vanilla beans which creates this gorgeous, heady flavour, I also spill a little grand marnier into the bread and then bake it in a tray of water so that it's kept moist while the bottom steams while the top bakes. 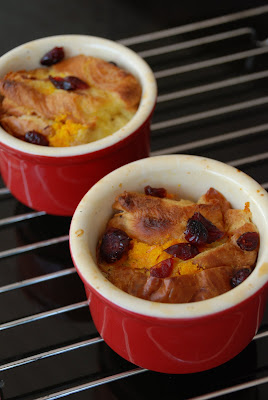 1. Preheat your oven to 180C degrees and choose a container for the pudding that is deep enough for a substantial bite but not so deep that you have to dig around for the pudding.
2. Slice up 200g of brioche bread or pannetone, this is available at Cedele ($7.60) or Swissbake stores ($5.60 but the Cedele one is better) in Singapore and arrange it a radial or terrace pattern with the crust pointing up
3. Add in some sultanas, cranberries and pistachios. You can omit these if the bread already has raisins.
4. Melt 50g butter and pour over the bread, along with 2 Tbsp orange juice, grated orange rind and 1 Tbsp grand marnier.
5. In a saucepan, combine 150ml cream (pure or heavy cream) with 150ml full cream milk, 2 torn-up pandan leaves and 1 split vanilla pod and cook over low heat. Make sure you scrap out the vanilla seeds before throwing the entire pod into the saucepan and heat the mixture to almost a boil, then remove the pandan leaves and vanilla pod.
6. In a bowl, beat together 2 eggs, 2 additional egg yolks and 80g caster sugar.
7. Pour the milk mixture into the egg mixture, while stirring rapidly.
8. Pour all the liquid over and into the bread and push the bread downward with the back of the spoon, so that the bread pieces drown a little in the liquid custard and soak it in. The bread will bounce back up, that's alright.
9. Fill a deep baking tray with water and place the ramekins or cake tin into it. The water bath should cover the bottom one-third of the ramekins and the idea is that the bottom of your pudding will steam in the heated water, while the top bakes in the oven's heat.
10. Use the pieces of the pandan leaves to cover the top of the bread pudding, this prevents the surface from burning and imparts the pandan smell to the pudding, counteracting the egg-iness of the custard.
11. Bake for about 20 minutes or until the custard is set but still soft, then remove, peel off the pandan covering and serve hot with ice cream. 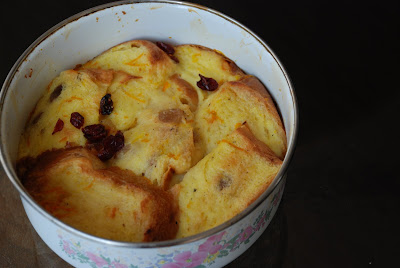 Let me share a secret with you that I discovered after the first time that I made this. You can actually omit the melted butter from the recipe and it doesn't really make a difference! In fact, I like it lighter and with the grand marnier and orange kick, it tastes just as nuanced. This is because soft breads like brioche already contain egg and butter.

Over the weekend, I made it again, this time layering thick chunks of leftover pineapple jam from the pineapple tarts, in between the bread layers and decreasing the amount of sugar from the custard. It was awesome!
Posted by Weylin at 12:08 AM