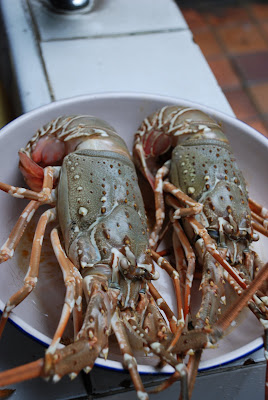 I have a tendency to get distracted at the wet market. So many things catch my eye, like today, when I was shopping for some cod to make miso cod and came upon these little monsters.

They don't look very large in the photo but one was actually quite an impressive size. The shopkeeper insisted on selling me both because the littler one had less value on its own so I wound up with a lot more lobster than I had planned. My initial plan for one, would just have been to BBQ it or roast it in the oven buried under herbs, lemon and breadcrumbs. 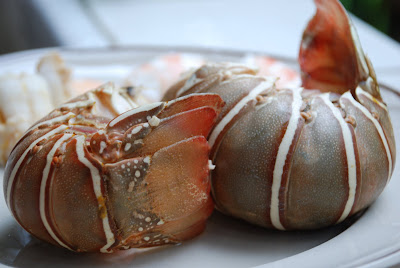 I started by lightly steaming the meat (I lifted out some sashimi from the neck joint of the lobster- incredibly delicious, I could have eaten the whole crustacean raw) and reserving the heads (as well as some prawn heads) to make a concentrated, heady stock-broth.

Unfortunately, my mom had already invited my grandmother to dinner that night. Even more unfortunately, my grandmother has distinctly Chinese tastes, that is, no olive oil, no cheese, no cream, no fruits, no uncooked vegetable salad, so while hunting up a lobster pasta recipe, I decided to compromise and use capellini. This was also a compromise to my dad who doesn't understand why I like flat, ribbony pasta (so much dough, he sniffs). 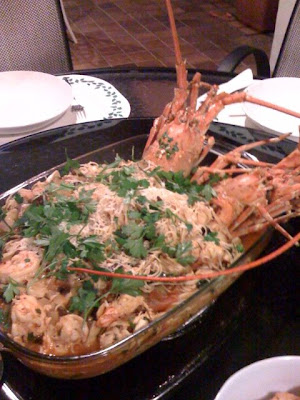 In the end, I stir fried the artichokes, chopped onions and dark olives (the natural saltiness of the olives helps to flavour the whole pasta without the addition of salt) in white wine, balsamic vinegar, garlic, light parmesan cheese and parsley. I added back the sweet seafood meat and the broth that I had made earlier that day to the cooked pasta.

The pasta soaked in a lot of broth, which made it both tasty and slightly softer than usual, I'd probably use a thicker pasta the next time just because they taste slightly starchier and firmer, as opposed to the capellini which took on the texture of this silky Chinese noodle, eaten at New Year's known as mee sua.

To my dad's surprise, my grandmother ate quite ferociously, had three large helpings and postured about the use of the leftovers, before coming out to ask to take them home. She out-ate the boy by a mile, which is no mean feat at all. I think my dad was gobsmacked! It's the second thing I've made that she likes (the first being the tomato capsicum soup over Christmas).
Posted by Weylin at 10:21 AM