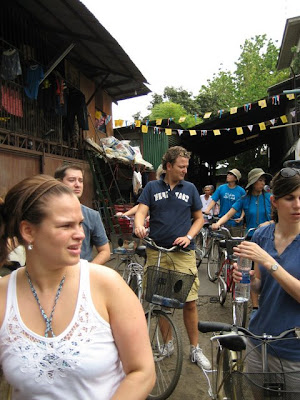 The weekend dawned early in Bangkok. I'd been advised by my dear and resourceful friend A. to check out a local bike ride run by a Dutch group in Bangkok city. This bike tour is fairly reasonable and takes you on an extended cycle around the back of the Sukhumvit Soi area (the area behind Emporium Department store) toward the Chao Praya river. 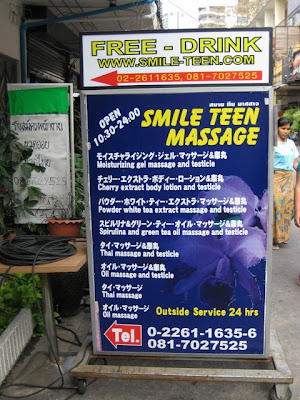 Although my local friends had a good laugh about this farang-breathe-in-dirt-and-potentially-hit-by-a-car bike ride, (they were particularly amused with the sign for "testicular massage" at the shop opposite the registration location in Soi Ari), it was actually good fun! 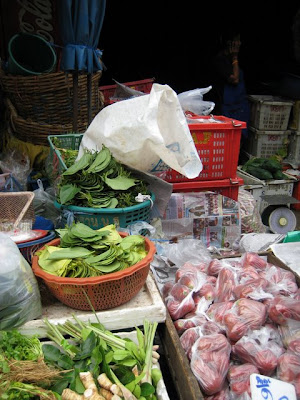 At the back of the sois, we cycled through the scenic rich people's residential area, the Japanese expat enclave, through deserted warehouses and under a bridge where we saw illegal muay thai fighting rings and cock fights! 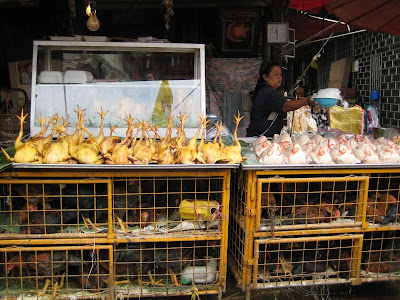 The highlight was a visit to a local wet market, which is the largest street market in this area, including tons of wet and dry goods stalls and even furniture stores and a dentist! 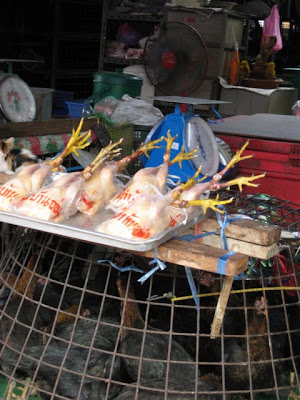 We then loaded the boats onto a longtail and headed down the river, toward a jungle area which we were told is known as Phra Paed Daeng. This is accessible by half an hour on the boat, although it takes a couple hours to drive to because of the traffic. This community is small and sited on the river with the access via a narrow series of wooden and concrete cycle-ways that criss-cross the maze of houses, parks and woods. 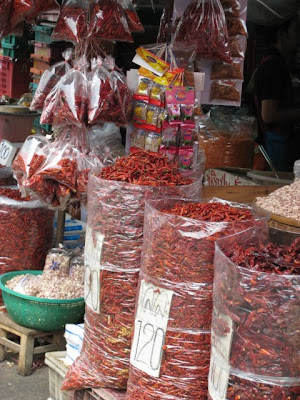 The air is clean and the area is very flowery and green, quite unlike Bangkok itself and we enjoyed our morning ride, culminating at a small floating market where we got to taste a bunch of local delicacies like fried fishcake, wrapped betal leaves with tamarind and coconut, local omellettes and sugar floss. We had simple fried rice, coconut and jackfruit lunch at a little hut (kampong) before heading back into the city. This was particularly worth doing though if you plan to, you should call ahead to book a slot as each excursion group is fairly small.

As you can tell, we've all been to Bangkok many times so no renditions of transvestite cabarets or tiger shows here, though can I say that I've enjoyed quite a few entertaining and pretty cabarets in Bangkok such as the Calypso Cabaret at the Asia Hotel and I would highly recommend a Muay Thai fight. 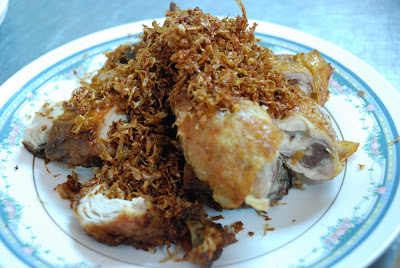 After the bike ride, we went in search of the best fried chicken, hidden away in Soi Polo, off Wireless Road, near the Conrad Hotel. 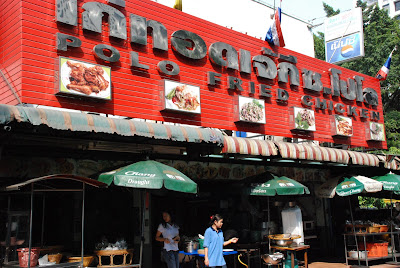 This local place is known as Jackie ('Sister' in Thai) Polo and they do delivery to the surrounding area. 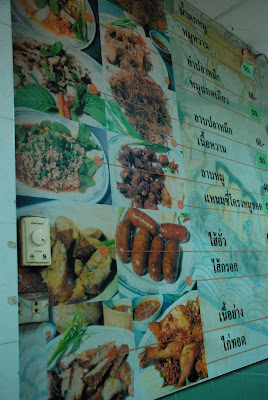 The best way to eat the sticky glutinous rice and chicken fried with shallot shells is still right there on the sidewalk, though the stall has now expanded to a seated restaurant area. 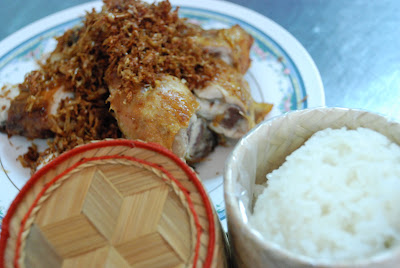 The papaya salad is also good, though very spicy! 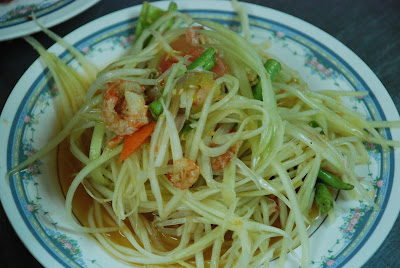 After filling our stomachs, we headed to the shops along the stretch between Central Chit Lom all the way to MBK Center, which are well-known to all tourists. My favourite places to go are probably the Platinum outlet mall, opposite Amari Watergate and Siam Square area, where a store called Living Dolls retails Philip Lim 3.1 clothing for a reduced price. Platinum, while noisy and suffocating, is quite an experience, the discount pricing goes by the number of pieces you buy (if you buy three pieces you get the wholesale price, which is usually a third or so of the rack rate) so go with friends or buy for friends!

Sadly, what I've discovered is that a lot of the malls have remade their food courts, which used to be these lovely collection of dessert and beef noodle stalls with concrete floors and a lunchtime buzz, into faceless, nameless "international" food centers that hock cold pizza alongside your too-sweet pad thai. What a waste!

We treated ourselves to Zanotti's for dinner, where as usual, the appetizers and meat just wowed us. For me, this is still the best Italian restaurant in Asia- I hadn't been here in awhile and had forgotten how good it was so it was such a pleasant surprise that the bistecca steak, cooked over an orangewood grill simply melted away in your mouth. It was the tastiest, most nuanced meat I had eaten in years and rivalled the bisteccas I had had in Tuscany. Coming from me, that says quite a lot, since I am hard to please when it comes to steak! It was so good that the next day, we were still saying sadly in the tuk-tuk... "orangewood grill". If I had an extra day, I would have gone again!

After dinner, I wanted to get drinks at the rowdy and risque Patpong area but was just too tired. I also wanted to go to the cafe-filled alternative greenie area at the UN headquarters and walk around in the brightly coloured Khao Lak backpacker district but didn't get up in time. 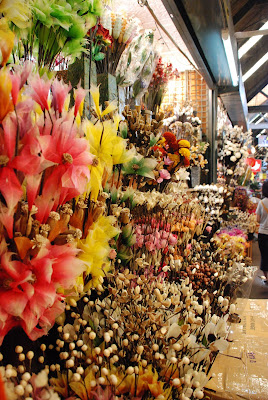 We drove out to the Chatuchak market, which is the largest outdoor market in Asia, comprising hundreds and hundreds of stores selling everything from the useful, to the fettish, to the absolute rubbish. 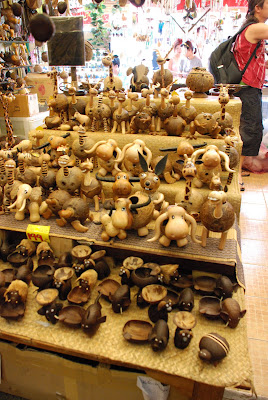 I think every visitor should go to Chatuchak but then I imagine every one already does. Another option, though much smaller, would be the Suan Lum Night Market, which is just off the Lumpini train station and is open every night (versus Chatuchak which is primarily a weekend morning market). 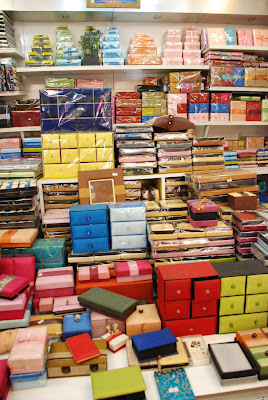 While not at all comparable to the scale of Chatuchak, I've found that the quality of the goods and food at the night bazaar has improved tremendously since I last paid it a visit. While Chatuchak remained cheap and cheerful, I thought Suan Lum had stores with great design and generally better content. 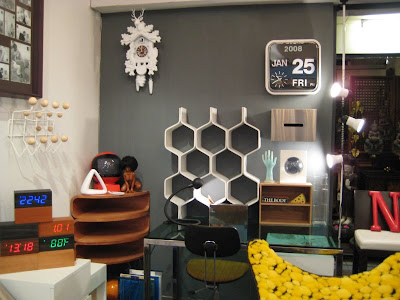 Things to look out for are clothes by local aspiring Thai designers. I found several dresses and tops that were wonderfully cut, ruched and pinched pleated, very reminiscent of the fashion of Thakoon, Philip Lim 3.1 or Peter Som. Other notable buys are vintage homewares and repro retro furniture which can be shipped internationally. If you're looking for a good replicas from Scandinavian or B&B Italia inspirations, then you'll like the well-stocked furniture stores at the markets. 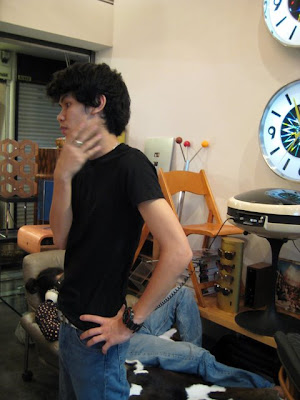 I bought colourful hand-painted fridge magnets of vintage American and Italian cars and one of my colleagues picked up a huge but gorgeous carved wood and rice-paper umbrella. 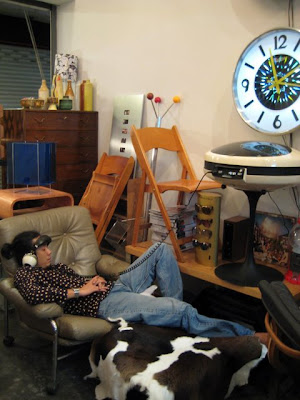 The stores that peddle celadon crockery, wood products (like salad bowls and ebony plates) and silk flowers and ribbons do a particular good job and the items are much cheaper than you would get in the city itself. The markets are definitely worth a visit for at least a couple hours at each, just for the environment and atmosphere. 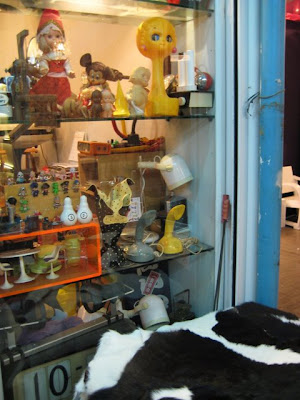 After the market though, you'll definitely need a good massage and meal! While there are a multitude of spas in Bangkok, one of the largest and most consistent chains is Healthland. It's definitely the place to go to for a clean, practical and cheap massage, their Thai massages cost about 400 baht ($18 SGD) for 2 hours and their aromatherapy massages run 800 baht for an hour and a half, which I think is really reasonable. The staff is friendly, polite and well-trained and they have several locations around the city.

For lunch, I like to go to Le Dalat Indochine which I think is still the best Vietnamese restaurant in Asia outside of Vietnam itself! The place captivates before you even sit at the table as it's housed in an old colonial bungalow and done up in blue and white china homeware and crockery, it's a bit like eating in someone's house. The food, like the individual beef pho served in ceramic burners, the sugarcane prawn rolls skewered into pineapple and the spring rolls, are all cooked to a refined perfection.

Another place I like to eat at is the Baan Kanitha Gallery for unpretentious and quality Thai food. The restaurant has two locations, one in Sukhumvit and the main location, which I like better, in South Sathorn Road. The setting is family friendly, though fairly classy and their green chicken curry, tom yam soup and red cargo rice specialties are some of the best I've eaten. The menu while extensive, is not expensive (each dish is about $8 SGD) and they've won 8 consecutive best Thai food awards from Bangkok Entertainment Magazine.

Other more upscale places to eat Thai food would be the Blue Elephant restaurant and Celadon at the Sukothai hotel or the Dusit Thani restaurants but I usually don't go there unless I'm long on time and short on imagination. For more places and recommendations, check out Aun's excellent suggestions and numerous Bangkok posts on Chubby Hubby.

I feel like Bangkok can be a mad city and if you've never been there before, here are a couple of tips to the travel-wise so that you don't get yourself in a mess. One, it's more real Asia than Singapore or HK so yes, they try to cheat you and you shouldn't be flashing cameras, maps or cash around in an open street. Two, don't be too friendly and don't listen to tuk-tuk drivers or cab drivers recommendations. Never listen to their recommendations because they get commissions from many tourist junkets. The number of times I have benefitted from even entertaining one of their recommendations is oh, about zero, or else in the negative digits.

If you are taking a cab, check that the drive has started the meter. If you are taking a tuk-tuk (an open-air taxi, or a moped connected to an boxseat), negotiate a fee first, or it will inveriably be some ridiculously sum by the time you get there. If it is rush-hour and boy, you haven't experienced rush-hour until you've been in a Bangkok jam, always look out the window to judge the street traffic first and if it's not moving, take the BTS (sky train system).

I've been stuck in jams for more than a couple hours before with taxi drivers that have fallen asleep and because the BTS is slightly more expensive, most locals don't ride it, which makes it the most comfortable, fast and convenient way to get from place to place. Stop at the nearest BTS station to where you're headed and walk the rest of the way, you might save yourself an hour and a severe headache.

Lastly, most locals and cab drivers speak poor English. They understand the popular tourist destinations but even then, you have to say firmly that you want to go there (and nowhere else) and be on alert for if they drive you awry anyway. If you don't speak Thai, carry a cellphone and the phone number of the places you are trying to get to. Then call ahead and get the proprietor to explain where their exact location is. Have fun!
Posted by Weylin at 3:29 PM