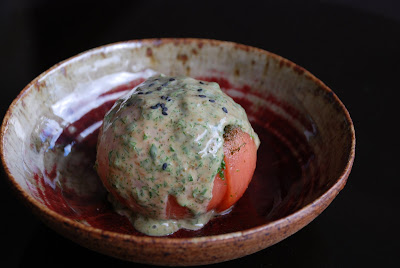 It's no secret that I love Japanese food. I love home-cooked Japanese food even more, I'd cook Japanese at home I think half the time, if I could and I'd definitely feed my own family Japanese food out of most other cuisines because its lighter and often healthier.

This is a classic easy dish that I adapted from a similar one at Xi Yan, the private kitchen restaurant in Singapore. You need to get Momotaro tomatoes from the supermarket (most premium Cold Storages will have them and they are also available at Japanese supermarkets like Meida-Ya in Liang Court and the Isetan supermarket in Shaw Center).

In Singapore, there seems to be a monopoly over Momotaro tomatoes by this company called Grace Cup, which also produces a lot of the cherry tomatoes that we consume and grows them in the highlands of Malaysia. Since the product is identical, I might say that Cold Storage tends to have slightly, though not noticeably lower prices per 2 tomato-pack than the Japanese supermarkets.

You want to inspect the whole tomato and choose those that are red all over, not green near the stems. Then you want to sun your tomato in hot direct sunlight for an afternoon, which makes them sweeter because the sugar rises toward the skin. 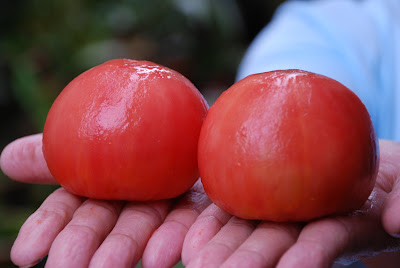 After skinning, your tomatoes should look something like this- taut, smooth and intact. Pat them dry, invert them and dig out the nob of the stems. In that cavity, pour a little sake, mirin and this fantastic sesame sauce by Kenko then let your tomatoes sit, cavity side-up, in the fridge for a couple of hours, so that the mixture seeps into the insides of your tomatoes.

Prepare a pouring sauce by finely chopping a teaspoon of Chinese spring onion and Chinese parsley (cilantro) and mixing it into two tablespoons of the Kenko sesame sauce, which is a mixture of sesame, wasabi and soya sauce. Then turn the tomatoes over (stem side-down) and slice them across firmly into 6 wedges. Move them whole onto a serving plate and drizzle the sauce mixture over the tomatoes. If you want you can top them with white or black sesame seeds.

This recipe can be prepared and should be, in the morning, for a dinner party and even the full preparation can be done before hand so it's a cinch to pull from the fridge and serve.
Posted by Weylin at 11:48 AM