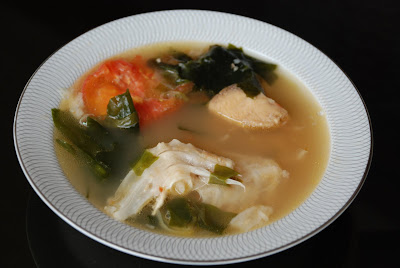 As a very Cantonese person, I absolutely love soup. I could and almost do, drink soup everyday and I love making soup. Just a vat of bubbling, boiling, heady-smelling soup on the stove is enough to make me smile and feel like I've come home.

I often don't blog Chinese soup recipes or ideas because it seems a bit strange, like making a liquid. I actually think of it as like, or better than, concocting a cocktail. The secret to good cocktails is the combination of the composite, the balance and imaginativeness of ingredients. Soups are no different.

The general and easy-to-understand rule though, is, heavy meat light vegetables, light meat tasty vegetables. What I mean is this, if you have a fish base, you want to use vegetables that have more depth and taste, like tomatoes, mushrooms, seaweed to help anchor the soup.

If you have say, duck meat soup, then your base note is already sufficiently heavy and rich, you need to balance it with cleaner vegetables, like white napa cabbage, wintermelon or the lighter chinese herbs like red dates or lighter flowers like jasmine. Chicken is a medium meat and therefore works pretty much with everything but works best with medium vegetables like carrots and onions.

There are some heavy soup bases, like pork, which will work with strong vegetables like lotus root or peanuts, though they will give you a very murky, dark soup. Then there are strong-strong combinations that are just too strong- have you ever tried a pork or duck-based soup with a heavy herb like ginseng? It's super duper heavy, like an overpowering drink! Some people may like it that way but it's often just too much, unless you're a post-pregnancy, lactating confinement-ee who's trying to like, replace half her lost red blood cells or something.

This is one soup that I jump at making whenever I'm preparing a fish dish, particularly a miso cod. Use the bones from the fish and buy a bit more bones at the wet market. Avoid very fatty fish like salmon, I prefer swordfish or a chinese white trout fish, something with firmer, meatier flesh. Boil the fish meat and bones till it cooks, then pour away the water from the fish boil.

Fill up the pot again and add in slices of ginger, handfuls of cilantro and spring onions to counteract the fish-iness that would otherwise result. Stir in three spoonfuls of Japanese dashi powder and a spoonful of enoki mushroom paste (you can find both at Japanese supermarkets). You can use fresh or dried kombu (kelp) instead of dashi which is the second derivative of either dried kelp, shitake or sardines. Slice a tomato in half, squish it a little and drop both halves in, along with some wakame.

Let the soup toil and trouble over a strong fire for at least an hour (lid the pot or you will lose all your soup, a rather obvious point!), then serve. Or, if you're OCD like me, chill and remove the risen fat and strain for a clear liquid soup before replacing the ingredients and serving.
Posted by Weylin at 6:52 PM